Journal News / Mysterties / Wanna See Some Strange and Intriguing Photos? You’ve Got Them 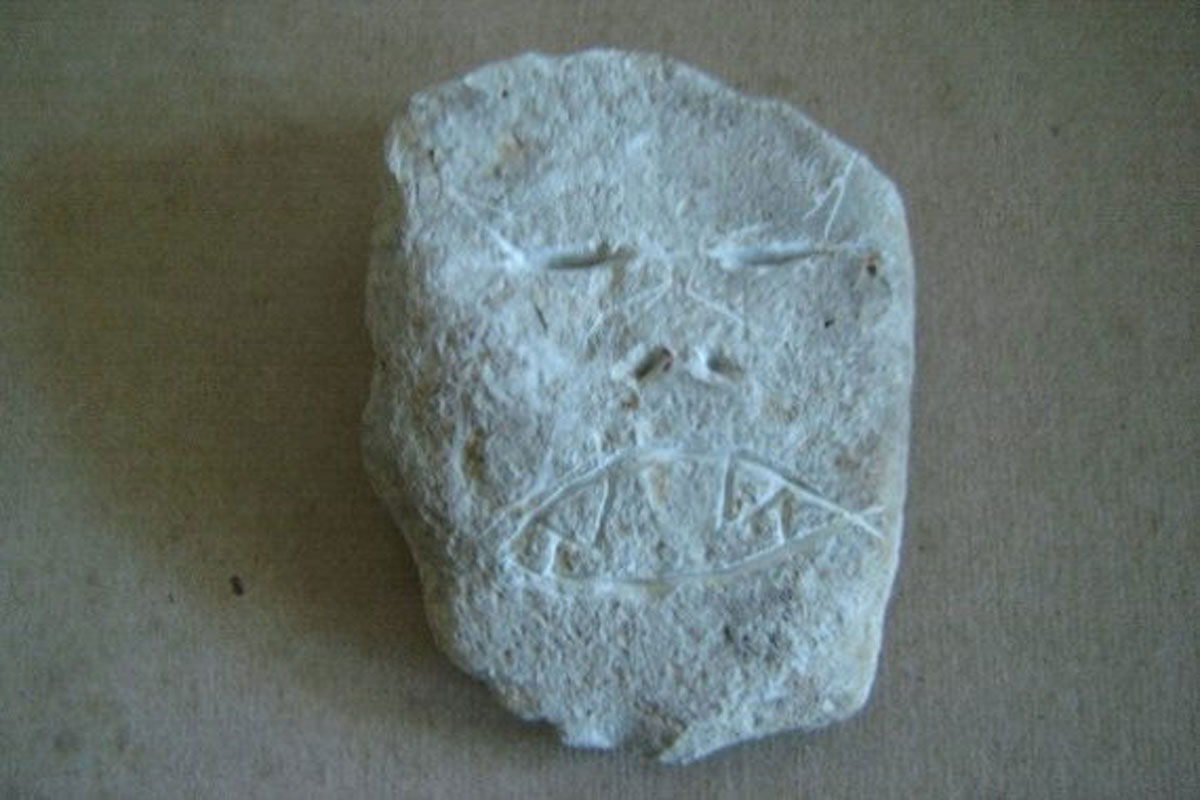 Wanna See Some Strange and Intriguing Photos? You’ve Got Them

Just for a bit of fun and intrigue, I thought today I would share with you some of my stranger photographs. They range from the weird to the sinister – and everywhere in between. Paradise is a small Texas city, situated not too far from the sprawling city of Fort Worth, and is dominated by isolated homes, thick and somewhat mysterious woods, huge fields, numerous cows, and not much more at all. Aside, that is, from a killer-werewolf. Dawn had just broken on a particular day in September 1996, and Walter, a rancher who then made Paradise his home, headed out to tend his cows, which had the run of a large field at the back of his property. Walter was not expecting to find the horrifying scene upon which he stumbled: one of his most valuable cows had been killed under cover of darkness. And, by the looks of the cow, the killer had been some sort of vicious, powerful creature that surely had no place prowling the fields of Paradise. The cow was disemboweled, with its throat ripped out and both back legs completely gone. Walter decided to take matters into his own hands and elected to embark upon night-time vigils, in the hope that the beast might return and he, Walter, would have the opportunity to blow the creature’s head clean off its shoulders, and put an end to the matter before it risked spiraling wildly out of control. Thus it was that at roughly 2.00 a.m. four days later, and while dutifully scanning the field with a night-scope that was attached to his high-powered gun, Walter became frozen with fear when he caught sight of a large, hairy figure striding across the field. Around seven feet in height, very muscular and dark, it had the body of a man, yet the face, the ears and the muzzle of what looked like a large German shepherd dog or a wild wolf. Walter fled the sight. No surprise. Very generously, Walter let me take a few pictures of the creepy carving. 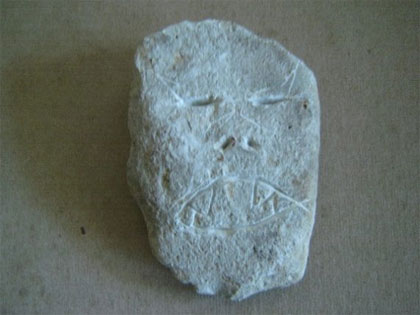 (Nick Redfern) From a werewolf/Dog-Man to a stone head

Many people may not know that the crash site of the whatever-it-was outside of Roswell, New Mexico, has its very own plaque. It’s hard to find, though. And, it’s on private property. When it comes to Roswell, Ufology’s premier case – or a saucer-themed equivalent of Jack the Ripper, in the sense that it’s all so long ago it will likely never be resolved to the satisfaction of everyone – there is, rather surprisingly, one thing upon which we can all agree. What’s that? That something came down on the Foster Ranch all those years ago. But…weather-balloon, Mogul-balloon, UFO, a military experiment, aliens, Russians, Japanese people, crash-test dummies? Well…who knows? And who can prove anything definitive even if they do know? But, whatever the event involved, it has its very own celebratory plaque out at the Foster Ranch, that is actually a long and winding road from the town of Roswell, particularly so when one gets to the ranch itself and the “road” becomes a bit difficult to negotiate! I took the below-photo of the plaque on a snowy, freezing morning at the crash-site in January 2011 while filming for a TV show. 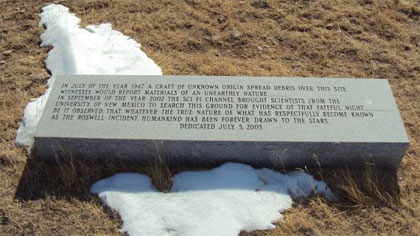 (Nick Redfern) Roswell’s very own plaque, but a long way away

How about holding a séance at one of the old hangars at Roswell? That was fun! The reason for me being at the old hangar was as simple as it was bizarre: I was there with several psychics who planned on trying to contact the souls of the Roswell-deceased to determine who they were, where they were from, and what happened to them. It was around the witching-hour on an appropriately dark, chilly and wind-filled night in December 2005 when the seance began, and which lasted for around 40-minutes, or thereabouts. With their minds trained, the psychics said that they felt the presence of something (souls, in other words), that they had imagery of some sort of vehicle violently crashing to earth on the harsh desert floor, and of the bodies of the crew being strewn around the area, and well and truly pummeled in the process.

Okay, much of that we know already. But to hear it during a séance, at midnight, in a hangar – or, rather, in that hangar – at Roswell was memorable in the extreme. Granted, not exactly the most conventional of all investigations into the Roswell bodies, but I’ll bet there has not been a stranger one! 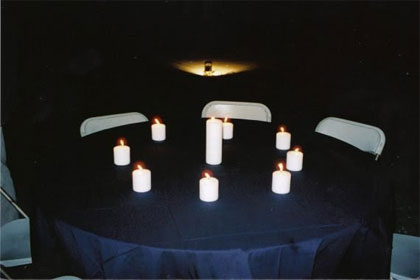 (Nick Redfern) The table where all the action went down

About twenty years ago, I spent some time in Taos, New Mexico and met with an interesting – and controversial – character named Dan Salter (see his book: Life With A Cosmos Clearance). Dan claimed to know the inside story of Roswell, crashed UFOs, dead aliens, and high-level conspiracies of truly dizzying varieties. Dan also claimed to be a recently-retired employee of the ultra-secret National Reconnaissance Office. Yes, UFOs were real, Dan told me. Yes, an alien spacecraft had crashed at Roswell, and both it and its extraterrestrial crew were recovered by the American military. Yes, sinister aliens were abducting American citizens and implanting them with tracking devices for diabolical purposes that could only be guessed at. Yes, people had been killed by the government to hide the horrible truth. And, yes, there were a number of “underground bases” in New Mexico where the aliens were undertaking all manner of horrific experiments on people for purposes so terrible that the Government, powerless as it was to intervene, dared not reveal them to the oblivious masses. Then, there was Dan’s license plate. Instead of being made up of a conventional combination of numbers and letters, it read: HQ INTERPLANETARY PHENOMENON SCIENTIFIC AND TECHNICAL COUNTERINTELLIGENCE WA 25, D.C. With Dan’s permission, I took some photographs of this curious piece of something in the strange saga. He explained to me that the license plate was a reference to a secret, military organization called the Interplanetary Phenomenon Unit, and was a retirement present from his friends and colleagues at the National Reconnaissance Office. Of course, the plate didn’t prove anything, at all. Good fun for an afternoon, though, and for a chat and a few margaritas. 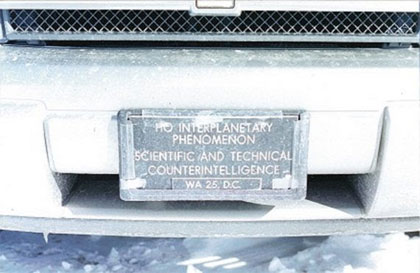 (Nick Redfern) That controversial plate that caused so much controversy

Taken by me by about fifteen years ago, I think, this photo shows the “Shugborough Inscription,” at the old and historic Shugborough Hall, Staffordshire, England – situated about a 20-minute drive from where I lived as a kid. So, what is the Shugborough Inscription? Well, you can find all about it right here. But, basically, it’s perceived by many as being some sort of deep and dark secret code that, at various times, has been linked to Canada’s Money-Pit, the Holy Grail, buried treasure, and has attracted the attention of wartime code-breakers, authors, the media, and many more! Not only that – Shugborough Hall is a definitively odd and distinctly Fortean locale, too. There have been at least three sightings of spectral, hairy-man beasts roaming around the nearby woods, as well as (in the 1980s) a series of unsettling animal mutilations in the area. In addition, “Shug” is an old English term for demon. Shugborough: The borough of the demon? 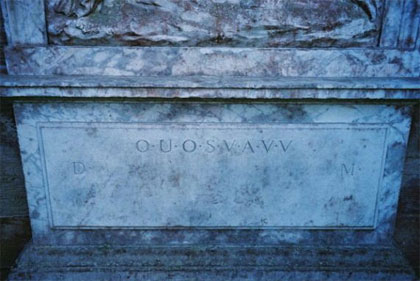 (Nick Redfern) A strange mystery to some

Yep, this photo is somewhat grainy, but it’s one I particularly like, since it was taken during one of my early excursions to the United States (in this case, in 1998), and, thus, provokes a lot of good memories of transatlantic adventures. The location was the UFO Congress at Laughlin, Nevada, and from left to right are… (A) one of the early players in the Contactee scene, Aleuti Francesca; (B) Contactee Wayne Aho, looking somewhat puzzled and muddled; (C) conspiracy ace, Kenn Thomas (who isn’t a Contactee); (D) Reverend Bob Short, a true character from the early years of Space Brother lore; (E) Guy Kirkwood/Mel Noel next to him; and, finally, (F), who I think is Bob’s wife, Shirley. Together, they raised a flag and toasted to those eras of Contactee-driven Ufology now long-gone, namely those dominated by isolated desert encounters with human-looking aliens sporting distinctly odd monikers and long blond manes. It’s doubtless that so many of the early Contactees were all together as late as the final days of the 1990s.

The Creepiest Creature on the Doorstep? Possibly!