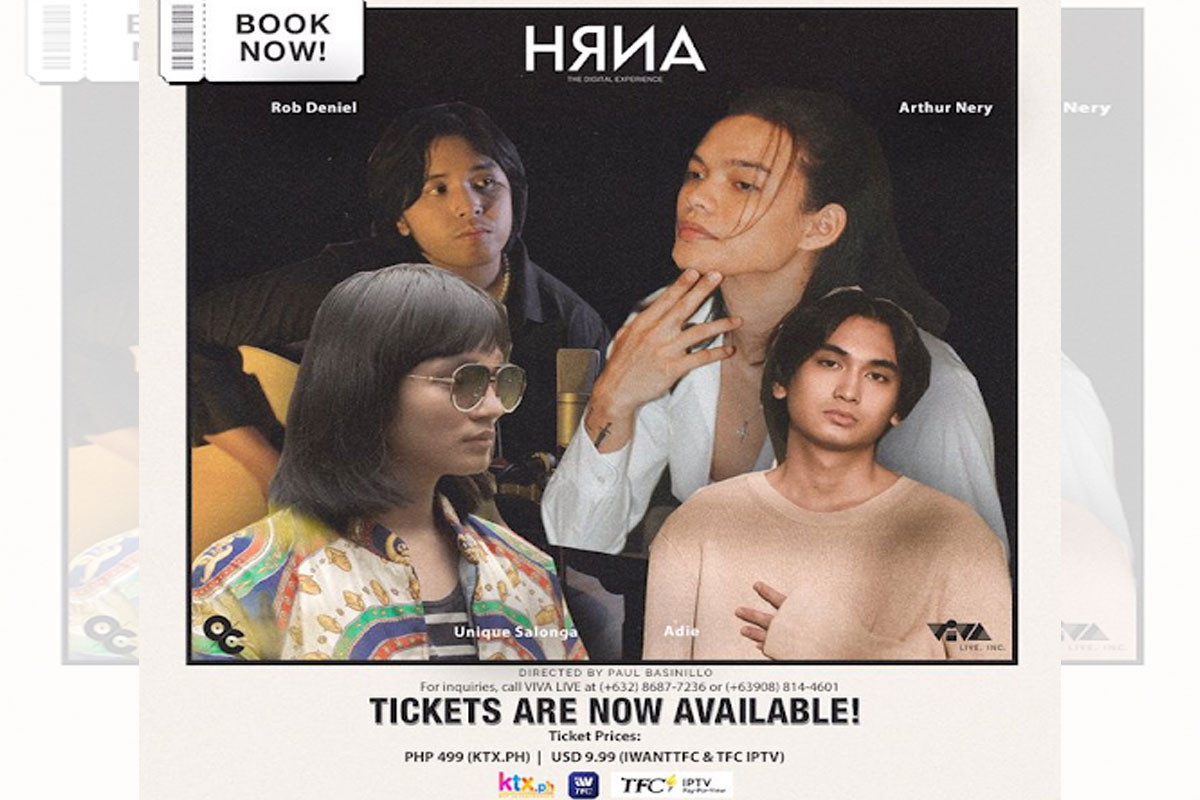 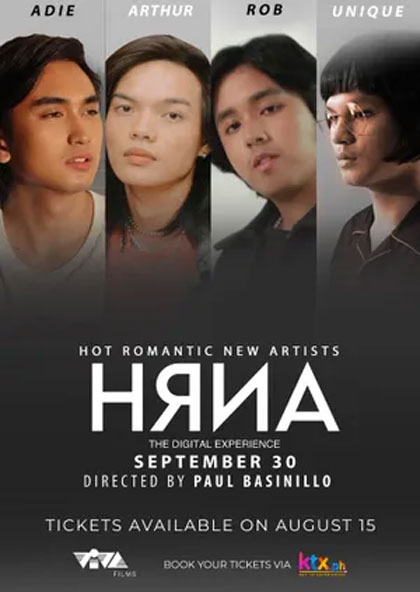 The show title “HRNA” is a stylized spelling and play on the Tagalog word ‘harana’ which means serenade. Viva Live, Inc. though, manages to put another spin on the handle as “HRNA” actually means “Hot Romantic New Artists,” which is a perfect description of the music styles of these four very talented guys.

Let’s start with Arthur Nery, the hot streaking singer-songwriter who is the leading music artist in Pinoy neo-R&B, soul and pop today. He is the singer behind the massive hits “Binhi” and “Higa”, songs that have lit most local playlists since they were released.

And it seems that Arthur can’t do anything wrong lately as all the singles he has released since have all become fan favorites and hits. These include “Take All The Love,” and his recent duets “Happy w u,” and “Pelikula” which Nery recorded with Janine Tenoso.

Meanwhile, new hitmaker Adie is the biggest, if not one of the best new acts to break out this year. His song “Paraluman” has since emerged as the biggest song of 2021 and as of this writing, is the biggest OPM song on streaming platform Spotify. His music video for “Paraluman,” which features Ivana Alawi has also become a big hit on YouTube.

Rob Deniel is the 17-year old wonder kid who wrote and recorded his first ever hit on his celphone. The song, titled “Ulap” is the breakout tune for this young singer-songwriter with more than 25 million streams. Succeeding releases such as “Gabi,” “Baby I Tried,” and the more recent “Darling, Darling ” prove that Rob Deniel has the songs and creativity to stay long in this music industry.

And of course, there’s UNIQUE. The voice behind the hit “Mundo” has proven that he is also a potent creative force as a solo act. His solo album “Grandma” has spawned fan favorite songs and heavyweight pop tracks such as “Midnight Sky,” and OZONE (Itulak Ang Pinto), and “Sino.” To date, just these three songs combine for over 66 million listens on Spotify alone.

Directed by Paul Basinilio, whose extensive experience working with musicians will definitely be a plus for the show, “HRNA” The Digital Experience, featuring Adie, Arthur Nery, Rob Deniel and Unique Salonga will stream on September 30, 2021 on KTX.ph., iWantTFC and TFC IPTV. Ticket prices to access the special streamed music special is Php 499 or USD 9.99. For inquiries, call VIVA LIVE at (+632) 8687-7236 or (+63908) 814-4601. This digital show is presented by VIVA LIVE, INC and VIVA RECORDS.