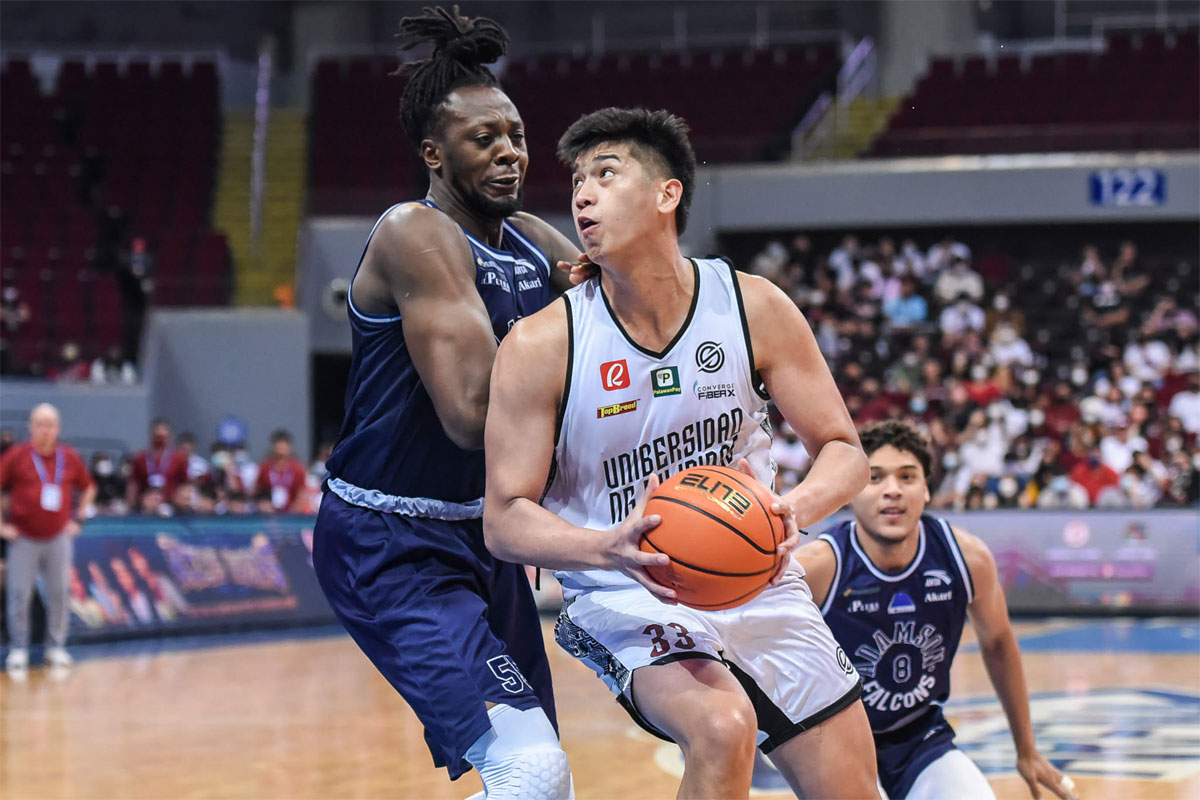 Carl Tamayo of the UP Maroons looks to score. UAAP photo
Basketball,

DEFENDING champion University of the Philippines solidified its hold of the top spot with a 91-70 rout of Adamson in the UAAP men’s basketball tournament at the Mall of Asia Arena yesterday.

In what expected to be a close game just like in the first round where it went into overtime has turned into a rout this time, as Carl Tamayo scattered nine of his 18 points in the big Fighting Maroons third quarter breakaway.

Earlier, University of the East overpowered last-place University of Santo Tomas, 81-51, to end a three-game losing skid and move up to 4-5.

Senegal’s Malick Diouf played his best game of the season with a career-high 20 points, eight rebounds and five steals to lead the Fighting Maroons.

He might be not among the best dominant foreign players, but UP coach Goldwin Monteverde is happy on what Diouf has been putting up for the squad.

“Actually, si Malick naman ever since, yung attitude niya will be always team first,” said Monteverde. “Bukod doon you know, during practices he will really stress out to his team how we should really play our game. Nandiyan siya lagi to remind everybody to execute well on both ends.”

“I feel very blessed, you know. The team is very blessed to have him to be part of our team, you know. Sabi ko nga, bihira yung ganoong klaseng student-athlete na you will really think about yung being selfless sa team,” he added.

The Falcons, who drew 19 points from Jerom Lastimosa, dropped to 3-5.

CJ Payawal scored all of his 17 points in the second half to go along with eight rebounds and five assists while LA Villegas chipped in 16 points and four boards for the Red Warriors, who led by as much as 34 points.

The Growling Tigers, who drew 23 points and 18 rebounds from Adama Faye, suffered their seventh loss in eight games.

Over at the UST Quadricentennial Pavilion Arena, Rocel Dionisio had a double-double of 19 points and 15 rebounds as UST vented its ire on UE, 76-36, to post its seventh win in nine games and tie La Salle, a 56-42 winner over FEU, in second place. Fina Tchuido paced the Green Archers with 12 points and eight rebounds.

Rose Ann Dampios recorded 20 points, seven rebounds, five steals and four assists while Victoria Adeshina chipped in 12 points and 12 boards as Adamson scored a narrow 62-61 victory over UP to tie its victims at 3-6.