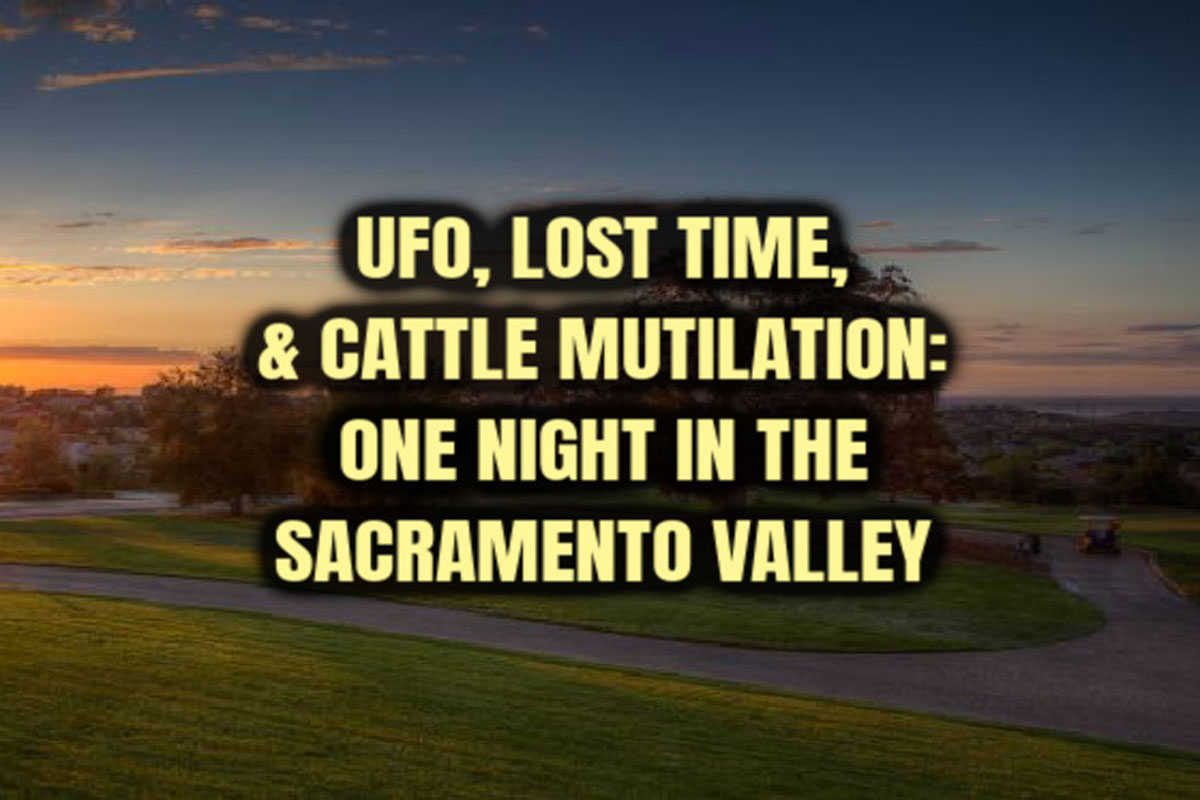 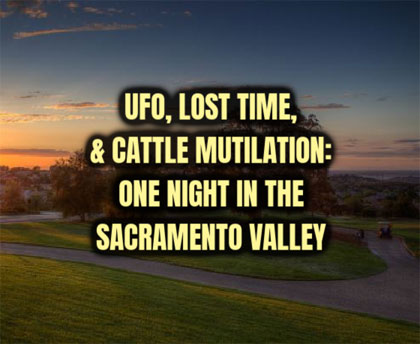 I offer the following report of an unexplained incident that was forwarded to me several years ago. It includes a UFO encounter, lost time, and a cattle mutilation. The witness wished to remained anonymous

“In July, 1976 a friend and I, who is now a dentist and a no-nonsense kind of guy, were cruising between Lincoln and Auburn, California on a quiet country road. We drove over the top of a hilly road and we were descending I noticed a bright bluish-white light shining down on the road about 200 yards in front of us. It was coming from a point over a large group of scrub oak trees. The trees came to a point over the road creating a canopy effect over the road. What was strange is there were no street lights and none of the light shining down on the road was being blocked out by the trees.

As we approached the light my car began to sputter and lost power, then the headlights went out. As we were approaching the light I was flashing my bright lights on and off before the car shut down. As soon as the car rolled to a stop, I opened the door to step out, the light disappeared while leaves were floating down below where the light had been falling onto the road in front of us. During July in the Sacramento Valley, it is still about 80 degrees with no wind. It gets very hot here in the summer.

The thing that really shocked me was 4 days later we took 2 of our cats to the vets, which was about 3 miles out of town. When the vet drove up he was acting confused and was stuttering, which he did when he got excited. He had been called out to a ranch to look at a dead cow. He explained to me and my mom that the cow had been cut up in a very strange way with a missing eye ball, utter and entrails. Its hind quarters had been drilled or bored out. He also said there were no flies, no bugs and no predator bite marks anywhere on the cow. The cow was located 50 yards from the very spot we saw the lights over the trees. My doctor friend said his mother was upset with him for getting home so late the night we saw the lights. However we were only out there in the country for an hour and a half. He claims it was 4 AM when we got home.

After dropping him off that night, I was really tired and just went home to bed and didn’t pay any attention to the time. He claims we lost 3 hours. To this day I have no idea what we saw or what happened. He refuses to talk about it with me or to anyone else. I have seen other lights and strange things over the years but this situation has always made me scratch my head and I wonder what really happened that night to us and that poor cow. Nothing was ever said to the police or to the news media regarding the mutilated cow or the lights we saw.

After years of hearing about abductions and cow mutilations, I believe we may have been part of something that cannot be explained with science or rational thought. My interest in UFOs has been very strong for years and I am sure there are other things going on around us that we cannot explain or can we make sense of them because we are not allowed to by those conducting such intrusive examinations of humans and animals.

Well, that’s my story and I’m sticking to it because I can remember it like it happened yesterday. We were not drinking, smoking or doing any drugs as my doctor friend was always against such activities due to his medical training and personal beliefs. On the other hand, I know something happened beyond the norm and will take it to my grave as a real and unexplained experience. Thanks”