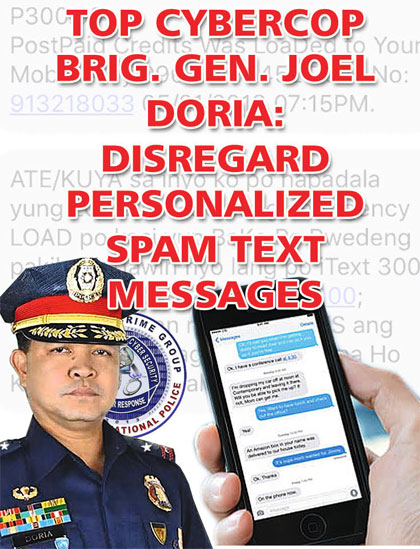 The public has been told by the director of the Philippine National Police Anti-Cybercrime Group (PNP-ACG) to completely ignore spam messages amid their investigation of people and companies behind these scams.

According to PNP-ACG director, Brigadier General Joel B. Doria, the citizenry must ignore these ‘spam messages’ which are being sent in bulk to random people by unknown senders.

These messages either contain offers of job hiring, investments opportunities, money, rewards, raffle draw winners, freezing of back accounts and many others anyone can imagine.

Other common online scams in the country include telemarketing fraud, identity theft, advance fee schemes, investment-related scams like the so-called Ponzi Scheme and pyramiding, credit card fraud, business fraud and non-delivery of merchandise. Targets of these scams include senior citizens, housewives, young students and even professionals.

Doria made the appeal as the PNP leadership headed by General Rodolfo S. Azurin Jr. expressed full support to the proposed investigation of the Senate Committee on Public Services on continued proliferation of text scam messages victimizing millions of Filipinos.

The top cop also said that they will help in the investigation citing the technical knowledge of the PNP-ACG which has investigated recent text scam cases.

Azurin also pushed anew for the implementation of the SIM Card Registration Act which is expected to assist law enforcers in identifying culprits or scammers who use their communication devices to victimize unsuspecting individuals.

However, security measures should be in place to safeguard the prepaid subscriber’s data similar to security features postpaid SIM card subscribers, he said.

Doria said that their initial conduct of social media exploitation revealed that the senders’ numbers are not linked to any social media accounts, messaging apps and digital wallets to avoid identification by law enforcers.

The official said there are numerous possibilities on how scammers get hold of the personal information of the recipients of spam text messages.

One, is thru the purchase of bulk mobile numbers being sold illegally in the dark web; thru social media platforms, websites, and phone directories around the internet; thru filled-up raffle tickets, and all kinds of standard application forms.

It can also be acquired thru random typing of numbers on social media messaging apps like ‘viber’ which when added, the messaging app will automatically supply the person’s name.

“Every day, scammers will employ different modus to get people to believe their lies to rob you of your savings. That is why we at the PNP-ACG continuously remind everyone to be vigilant and to be aware of the different tactics of fraudsters. ‘Knowledge is key here,” Brig. Gen. Doria said.

The official said that in order to further combat this type of modus, they are calling on recipients of personalized spam messages to simply ignore them and not to click on the link attached to these messages.

He likewise said that “collaboration, cooperation and close coordination” with the National Privacy Commission and the different TELCOs is necessary to address the issues on spam text messaging.

The PNP-ACG director said that cybercrime awareness and public information campaign are continuously being conducted by personnel of the PNP-ACG in order for people to be aware of this type of scam popularly known as “smishing”.

He also assured the public that they are continuing their cyber-patrolling activities to ensure a safe cyber space environment for every ‘Juan’.

“This measure is anchored in the peace and security framework ‘M+K+K = K’ of Gen. Azurin, Doria said.

PNP-CIDG steps up efforts vs wanted foreigners in PH