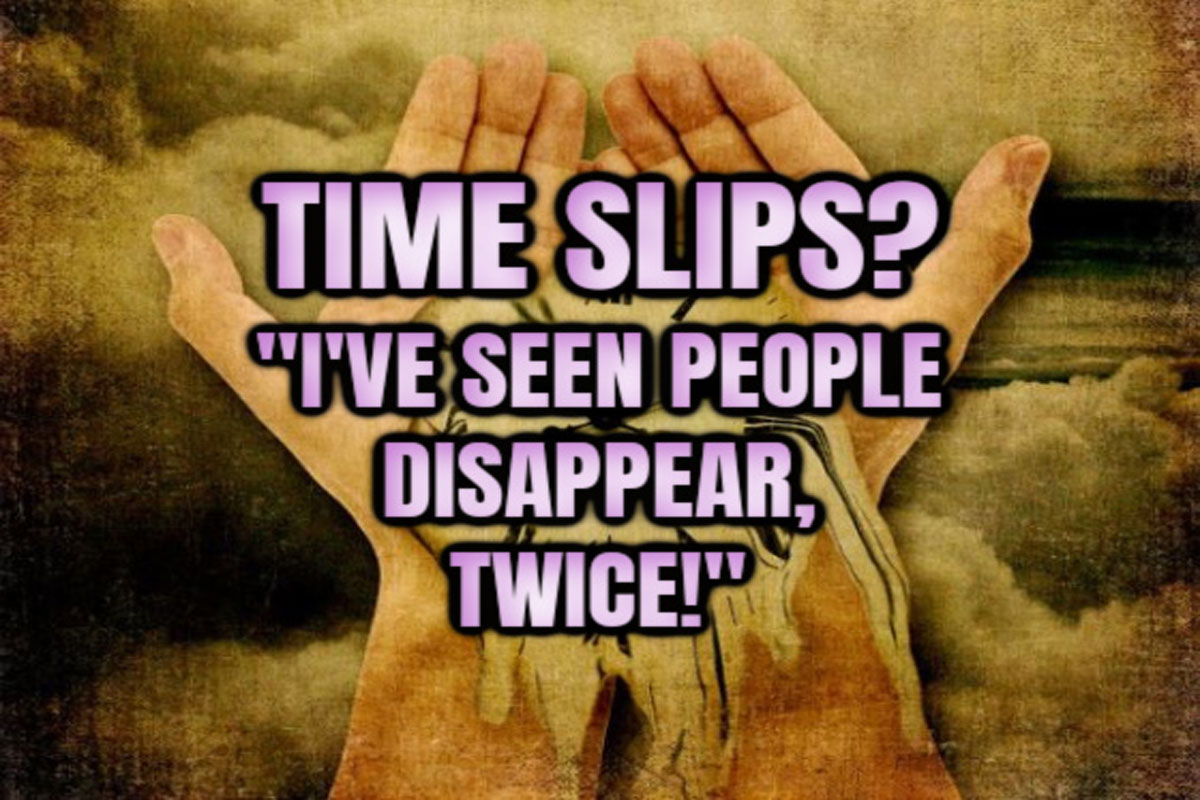 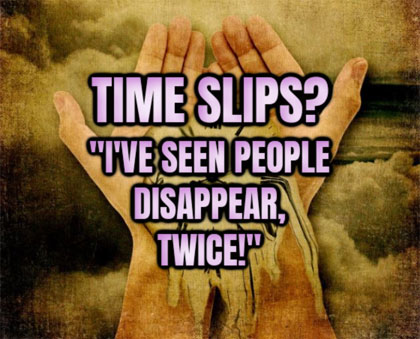 A Melbourne, Florida resident recalls two occasions when they literally observed people disappear. In one instance, they were with someone else. Could these be examples of time slips?

“I’ve seen people disappear, twice! Once, my dog and I were walking across a set of soccer fields on our college campus. I noticed that about 60 feet behind me, someone else was crossing the soccer fields. Nothing unusual about this, as it was a college campus after all, but being female, I’m especially vigilant about keeping an eye on people behind me! My dog noticed the guy, too, but didn’t react oddly.

Suddenly, he just wasn’t there. My dog froze. I froze. He was gone. No trees or objects to disappear behind. We were in the middle of a group of soccer fields, and suddenly, he was just gone. It gets weirder.

Several weeks later, I was in front of a 7-11 store at the edge of the campus (Florida Institute of Technology). There’s an intersection near it, and the road that crossed the road the 7-11 was on has a sidewalk along it. The sun was setting in the direction of the crossing road, but you could see a guy about 500 yards up that road, walking toward the intersection. He was just a tiny shadowed figure against the setting sun. There were a couple of people a little closer than he was, also walking in the direction of the store. My dog froze, and her hackles went up and she started snarling. I had never before (or ever again) seen her react like this. She was staring directly at that tiny silhouette, going nuts. She ignored the other people walking toward the store. She was clearly staring at the more distant figure. Oddly, I wondered to myself if it was the guy we saw disappear. Don’t know why I thought it. It had been weeks since the episode.

I tried to get my dog out of there. She was a Great Dane mix, huge, and she wasn’t budging, and to tell the truth, I wanted to see who it was. I had the oddest conviction that it was the guy who had disappeared. By the time the guy got close enough for me to see who it was, my dog was straining at the leash, snarling and snapping at him. I had to pick her up and stagger off with her to get her out of there. It was, indeed, the same guy. He gave us a dirty look and entered the store. He was Middle Eastern and kind of on the small, slender side. Not a physically imposing guy at all, but my dog behaved like she wanted to kill him. It’s the only time in her life I ever even heard her growl, let alone snarl.

The second time was also in Melbourne, Florida (as the above incident). My friend and I were driving over the bridge across the Indian River, toward Melbourne, my friend at the wheel. We saw a guy in dark pants and a blue jacket step off the curb of the walkway along the side of the bridge, walk into the middle of the road, and disappear. Neither of us said a word. My friend finished driving over the bridge, pulled off the road, and sat there for a moment, then said, “Did you just see that?” I said, “The guy in the blue jacket who stepped off the curb, walked into the road and disappeared? Yeah.”

We decided to drive back over the bridge to see if he had reappeared. He hadn’t. It was near the water, so we considered the possibility of a mirage, but the conditions weren’t right, and it was odd that he was perfectly synchronized to the curb if it was a mirage.

The next day, she brought it up again. She decided that we must have been mistaken. I still know I saw a man disappear. This was in the early 80s, and my friend and I are still in touch. Time and distance have made it easier for her to accept, and she still sometimes asks if I remember the man we saw disappear. That close to water, I guess we can’t rule out a mirage, but as I said, conditions weren’t typical for one, and his movements sure look synchronized to his surroundings.

I, too, wonder about time slips. My first post above is about something that happened with my sister that was along those lines. We both sometimes wonder if there’s another dimension somewhere where we disappeared (or maybe the us from this dimension is there instead!). Very weird.

I read somewhere of an incident where an airline flight disappeared off the radar for 10 minutes over Florida. Air Traffic Control was frantic trying to figure out where they’d gone and if they’d crashed. Ten minutes later, they popped back up in the same exact spot in the air that they were in when they disappeared. The people on the plane had no perception of a time loss. I haven’t researched it, so I don’t know how true it is.” F

The Odd Story of the Last Alchemist of England