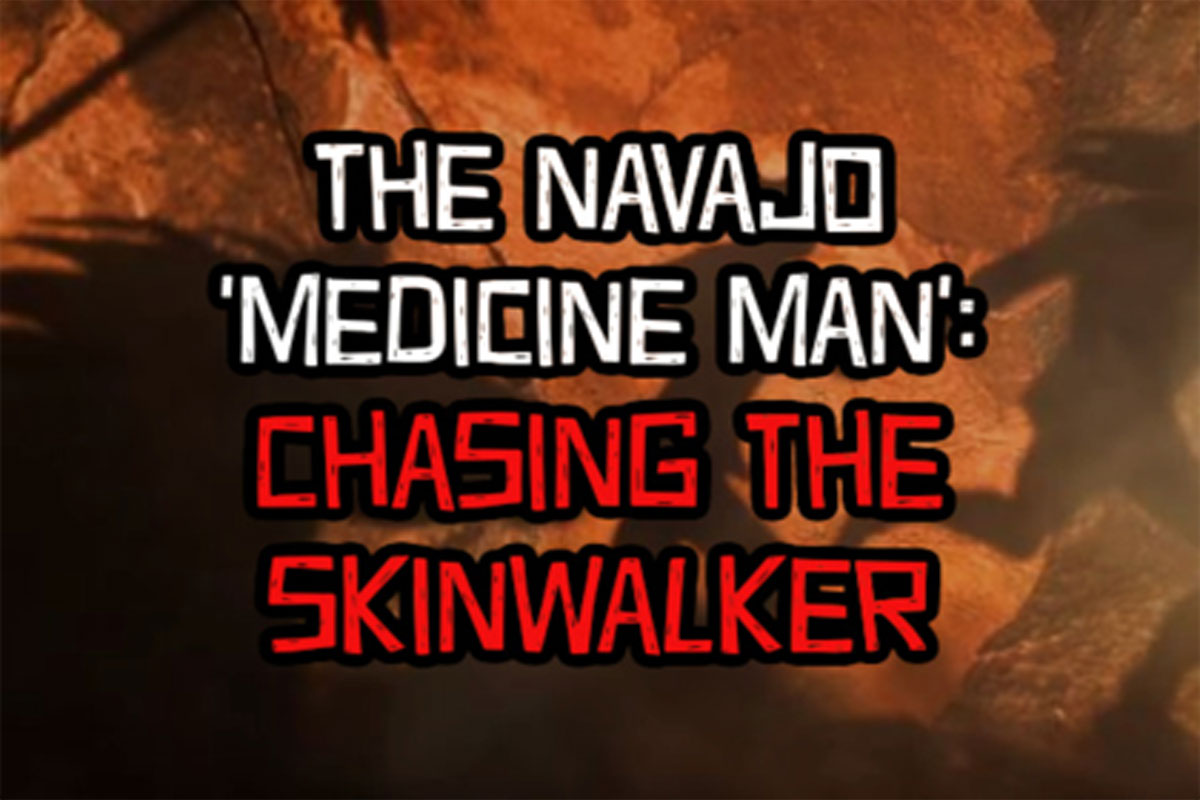 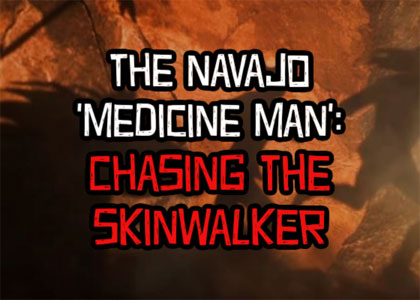 A Navajo husband and wife sense that a Skinwalker has taken control their property. They ask a Medicine man and his assistants to intervene. The account then turns dark and foreboding.

“The stories of Navajo Medicine Man or Shamans having encounters or altercations with Skinwalkers, is one not largely out spoken by them – much like a Vatican exorcist. Most modern encounters today are either a host seeking help from the Medicine Man, either spiritually, holistically or physically.

In most way they are like Priests. People find comfort in their prayers, blessing and guidance in times they don’t understand fully or seeking just to be enlightened by words wisdom or knowledge. They are also like an alternative psychiatrist or therapist with experience in medicinal remedies, psychological therapy, or physical therapy.

From what I was able to piece together from bits and parts of other stories. A group of Medicine Men (when horses were introduced to Navajos) some with their own abilities being mediums, energy drawers, conduits, some supernatural or natural would investigate claims and rumors around the Navajo Nation seeking out these, Skinwalkers are spiritual and an unexplainable phenomena. People who become host to its strange phenomena would seek out these Medicine Men for help, some even travelling hundred of miles to the southwest.

In one such encounter I’ve heard from an elder is that when he was a young boy becoming a man. His grandfather’s grandfather would ride around the Navajo Nation and off, sometimes going as far in to the Canadian Territories to the northern territory of Mexico, helping people of all ailments spiritually and physically under discretion and some form of payment.

He then talked about when they would come across definite proof of demonic hauntings and presences. Much like how a church would investigate demonic presences.

One encounter he remembers that happened in the heart land regions of the Navajo Nation specifically Diné Betó, Arizona.

An elderly man spent a week herding his livestock to their winter property. When he finally returned home in the day he found his wife had not prepared their wagons with their belongings. But seeing her rifle and horse were gone, he thought she must be getting supplies or went to visit other nearby residents they know in their rural region.

(Times back in the day for Navajo they kept busy all day much like rancher an farmers. They were always cautious of strangers and burglarizing and ransacking of property was common but low. Land tracking was a very common skill before it wasn’t)

He than noticed nothing was disturbed or out of the ordinary for them. But he had a feeling his wife went to a nearby friend’s. His gut feeling was right and found out that his wife was there. But also asked why she left their place with their valuables and wagons unguarded.

She told him the following. One of the goats came back and only stood in one direction. With a stick in hand, she attempted to snap it out of whatever trance it was in. It screamed and dropped dead. She thought it could be ailments or termites in its horns eating away at its brain. She didn’t want to waste whatever was salvageable. She butchered the goat and hung its wool skin to dry in the sun. She placed the still intact headless goat in back of one the wagons. As she went about finishing her chores to pack the wagon she heard a rattling outside. Thinking it was a rattlesnake on the property she went to find it. But came to notice the sheep skin was gone, thinking that someone was on the property and trying robbing them. She went into the hogan to get her rifle.

Gun at the ready she didn’t get far before noticing that the goat skin was dragging on the ground. Thinking it was animals instead she followed the dragging trail and kept an eye for an animal in the distance. Instead she noticed, not far ahead, the skin hide was dragging itself – gliding over the ground. She shot at it more than several times but it kept going toward some washes in the land with hilly terrain. Unsure of what she had seen she decided not to stay the night and left to the neighbors.

Hearing this the husband had her and the neighbors go find the local Medicine Men common in the area, but it would be a couple days. Returning with a elderly Medicine Man, 3 men accompanied him. The wife then showed them where she stopped following the skin and they went on from there.

Unable to accompany them, the husband and wife kept a bonfire going all night as a waypoint for them to see in the night sky. Late into the first night one man came back and asked if they could spare a horse as one of theirs has fallen into a ditch and severely injured itself, so they had to shoot it. Agreeing, they let him take the husband’s horse as it was fast and knew the area.

The husband agreed, but only that if he can check on his other horses. The third man agreed and they rode into the night. Coming upon a ridge in the night, lightened up by the full moon the third man rode to the sound of a sweat lodge ceremony the Medicine Man an two other men were conducting. Coming upon the sweat lodge, he respected the strict custom around a Medicine Man in the middle of ceremonies. He stayed silent.

(It is custom among Navajo culture to be silent during a ceremony and not to break the concentration of the Medicine Man and strict lesson never to question what they do).

He sat there with the low dim fire and keeping the rocks hot listening to the chanting. The he noticed a blurry white mass out in the distance below. No ambient light came from it, only a white mass – like someone wearing all white in the moon light. He was atop the cliff looking down below to barren flat desert and washes. He saw it darting left and right, going into washes and coming out going hundreds of feet in no pattern, faster than a horse can run and way faster than someone who can even run fast.

Twilight was coming up and the white mass disappeared into a wash to his right and never came back out. He observed everywhere below to see where it was, and still listened to the song the Medicine Man an his assistant were singing.

He could hear the heavy foot steps of his wife’s horse. He did as what he was told and didn’t turn around once to check on the horse. But then, the heavy horse thud steps got closer to him in a rhythm of two, like someone walking and he was on high alert to turn around. He felt a hard clutch on his shoulder. He screamed and cried out in agony yelling, and was ready to fight whatever it was in the night. But it was the old Medicine Man. The husband was frightened by feeling such a strong heavy presence. The old man asked what he was doing far out away from his home. Confused, he said he came along with one of the old man’s assistants to check on his horses. But instead he made him a fire watcher.

The old man, with concern, said they had seen the goat skin and they were chasing it into washes to trap it in the high sand walls. But it had killed two of his men the first night when they entered the wash, by collapsing the side walls when they got close to the goat skin on the ground. He and his last assistant went on to trap it in the cliff sides during the next day, but couldn’t get to the top of the cliff to where it was at. So he went ahead and his last assistant stayed where it was last seen below. He went along and around the cliff sides to find a trail up, but that took most of the day and he came upon the husband. He followed the smell of a dead animal and seen scattered flesh and blood, then heard the sound of a drumming ceremony in the night. He couldn’t tell where it was, until the sky lightened up from early morning coming. Then he finally seen him there sitting near the edge of the cliff.

Thinking he was being tricked, the husband opened up the makeshift sweat lodge doorway. Looking inside, he could see it was made of his horses’ bones and not wood. And there, laid on the opposite side of the door, he saw the goat skin. The Medicine Man took the skin and they burned down the sweat lodge to ashes in a bonfire.

The husband asked how a skin could do all that. The old Medicine Man explained that something else in the night came for the goat skin on the second night. They thought it was him, the husband coming out to find them, but it wasn’t. They rode to the sounds of heavy galloping and dark flashes of something in the moon light. In the nights, they hunted it like predator animals and tried luring it into washes or caves in the washes, by sacrificing one of their horses to collapse in the high sand walls, but no avail.

Returning back to the husband’s house, the wife told them that where she had put the carcass of the goat, it was gone and couldn’t find tracks.

When time came to go to their winter property, they never returned back to their original property. Time passed and the land turned into sand dunes and the hogan, with no upkeep, soon fell apart over the years. And when it finally collapsed in, they never rebuilt.” LC

UFOs, Secret Experiments, or a Combination of Both?
October 21, 2021 People's Tonight