Science media have been picking up this story the last couple of days of the description of a giant stork fossil that was found on Flores, the home of our favourite hobbit Homo floresiensis. The fossils are described in a paper in the Zoological Journal of the Linnean Society; the giant stork is estimated to be 1.8 metres in height and are contemporaneous to H. floresiensis which gives us pause for thought – if storks could grow so drastically big in an island setting, why couldn’t have humans grown so drastically small? 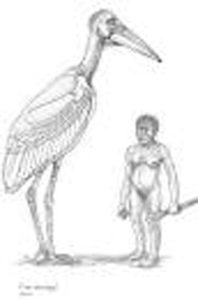 Fossils of the genus Leptoptilos from the Pleistocene of Liang Bua, Flores, Indonesia, belong to a new species of giant marabou stork, Leptoptilos robustus sp. nov. This giant bird, estimated at 1.80 m in length, was similar in dimensions to extant Leptoptilos dubius, except for the tibiotarsus. The thick cortical bone wall of the tibiotarsus and the estimated weight of 16 kg imply a reduced flight capability. Osteological and biometric characters suggest that L. robustus is most closely related to L. dubius. An evolutionary lineage is proposed in which a volant L. dubius-like ancestor in the Middle Pleistocene evolved into the Late Pleistocene L. robustus on Flores, with a concomitant reduction of the ability to fly and an increase in body size. The large body size and terrestrial lifestyle of L. robustus are responses to an unbalanced, insular environment with abundant prey items and a lack of mammalian carnivores, and emphasize the extraordinary nature of the Homo floresiensis fauna.

What Does Science Say About Flying and Fire Breathing Dragons?