Journal News / Mysterties / The Devil Walks Among Us: The Legend of The Jersey Devil 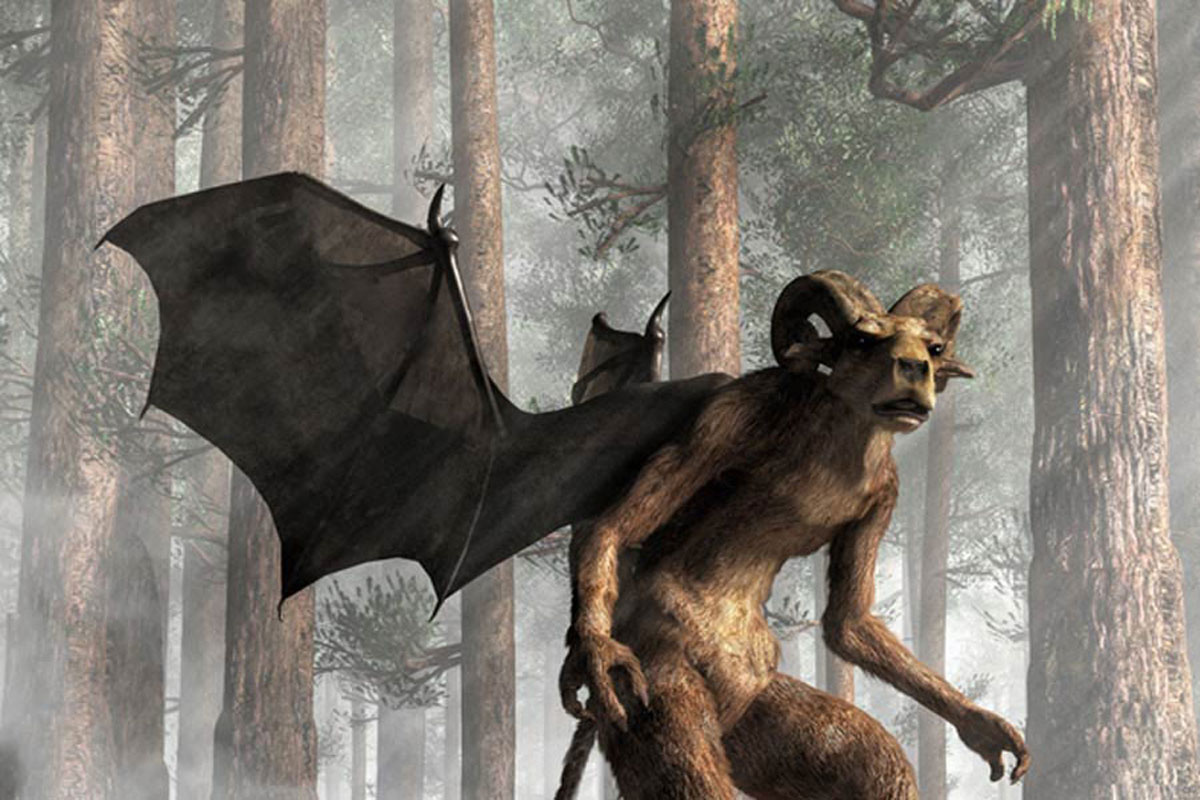 The Devil Walks Among Us: The Legend of The Jersey Devil

Inhabiting the Pine Barrens of Southern New Jersey, United States, is a creature known as the Jersey Devil. This legendary being has been described as a kangaroo-like creature with the head of a goat, horse, or dog – depending on the source. It also has bat wings, horns, cloven hooves, claws, and a forked tail. It can move with impressive speed and emits a blood-curdling scream to make its presence known. 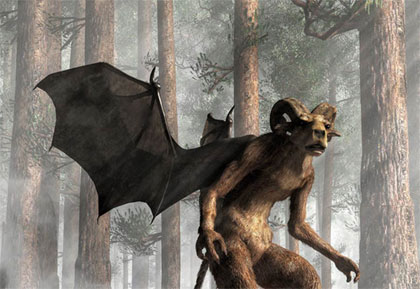 In the beginning, it would feast upon cattle and sheep, then it moved on to terrorizing people with its unearthly scream in the surrounding rural area and beyond. According to legend, the appearance of the Jersey Devil foretells disaster in the form of shipwrecks, war, crop failures, or other unfortunate events. However, no human has ever reported being directly harmed by the beast.

The legend goes something like this: A young girl from New Jersey was either cursed by a gypsy or cursed as a traitor by the townspeople after she fell in love with a British soldier. This girl, as a resident of the Pine Barrens, New Jersey, became known as Mother Leeds and is said to have had 12 children. Upon discovering she was pregnant with a 13th child, she cursed it in frustration, crying that the child would be the Devil, or more specifically “let it be the Devil!”

In 1735, on a dark and stormy night, Mother Leeds gave birth to the child. In some versions of the story Mother Leeds is a witch, and the father of the child is the Devil himself. After being born, the child quickly changed into the creature known as the Jersey Devil, killed the midwife that had helped birth it, and then it either fled or unfolded its wings and flew away into the night.

Mother Leeds has subsequently been identified as Deborah Leeds, on the grounds that the husband of this woman, Japhet Leeds, named 12 children in his will in 1736. The two lived in the Leeds Point section of Atlantic County, New Jersey, which is commonly the location for the origin of the legend. In some versions, there is a subsequent attempt, and failure, by local clergymen to exorcise the beast from the land.

Hoofprints of the Devil Spotted in the Snow?

Mythology in Romania: Exploring Beliefs about Witchcraft and the Devil 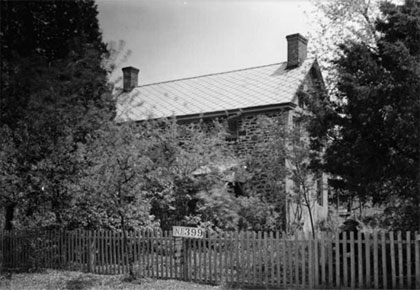 Another explanation for the origin of the Jersey Devil explains that prior to the early 1900s the Jersey Devil was referred to as the Leeds Devil or the Devil of Leeds, either in connection with the aforementioned family or the origin location. According to historian of science Brian Regal, the folk legend of the Jersey Devil is an amalgamation of various other popular legends prior to the 1900s. This includes a “ colonial-era political intrigue” involving New Jersey politician, Benjamin Franklin, and his rival almanac publisher Daniel Leeds (1651-1720). This rivalry led to the Leeds family being portrayed as “political and religious monsters,” and, supposedly, it was Daniel Leeds being portrayed as the “Leeds Devil” that sparked the popular legends that spawned the creature. 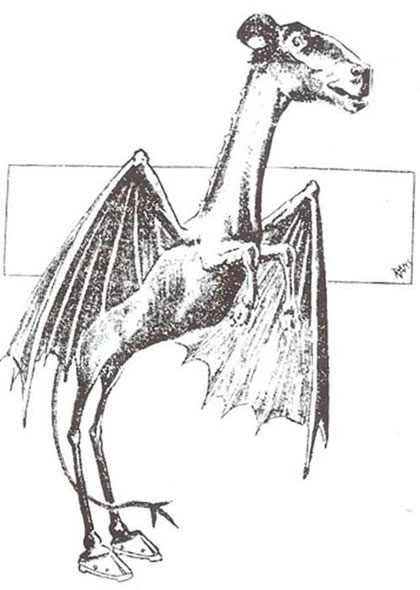 In the 17th century, English Quakers settled in the Southern New Jersey area. Daniel Leeds was a Quaker and prominent figure in his community located in the Pine Barrens. He became increasingly ostracized by the Southern New Jersey Quaker congregation following his publication in 1687 of almanacs containing astrological symbols and writings. This type of writing was deemed “too pagan” or blasphemous, and the almanacs were censored and destroyed.

Due to his interests and continued production of banned material he became an enemy of the association of Quakers in Southern New Jersey and he was dismissed as evil. Subsequently, Daniel Leeds’s son, Titan Leeds, began to include the Leeds family crest on the almanacs. The crest depicted a wyvern, a bat-winged dragon-like creature which stands on clawed feet – reminiscent of the description of the Jersey Devil.

Does the Jersey Devil Exist?

Brian Regal suggested that beyond the story of Daniel Leeds, the modern legend of the Jersey Devil was solidified and standardized in the early 20th century as the myth we know today. During the week of January 16 through 23, 1909, newspapers published hundreds of claimed encounters with the Jersey Devil all over the state of New Jersey. There were claims of attacks on a trolley car in Haddon Heights and a social club in Camden.

Police in Camden and Bristol, Pennsylvania supposedly fired on the creature with no effect. Others saw footprints in the snow that were said to have resembled those of the beast. Sightings were reported as far away as Delaware and Maryland. Due to the influx of reported sightings and attacks panic spread throughout the state and surrounding area.

Schools were prompted to close, and workers were encouraged to stay home. Groups of hunters, certain of their skill, patrolled the countryside, and it is rumored that the Philadelphia Zoo posted a $10,000 reward for the creature.

One group, calling themselves the “Devil Hunters,” consider themselves the official researchers and authority on the Jersey Devil. They devote their time to collecting reports, visiting sightings, and going on hunts in the Pine Barrens to prove that the creature does, in fact, exist.

The Bizarre Importance of Bleeding Bodies in Medieval Trials

Stan Patitul and his Infernal Pact with the Devil 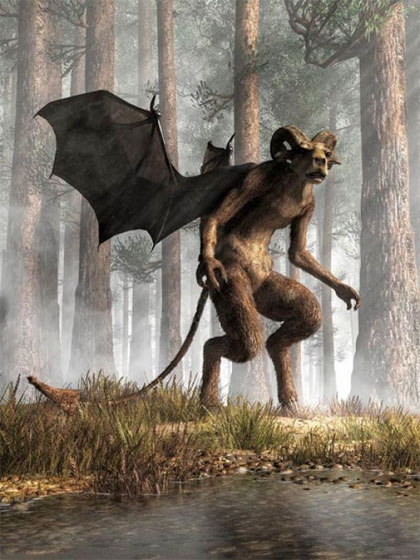 Medical sociologist Robert E. Bartholomew has explained that the numerous sightings of the Jersey Devil in 1909 can be attributed to mass hysteria sparked by the historical urban legend. Skeptics chalk the reported sightings and attacks up to nothing more than misidentified animal sightings, historical local disdain for the Leeds family, and negative perceptions of the local rural population of the Pine Barrens.

The legend is seen as a scary story used to spook and entertain children of the area. No photographs, bones, or any evidence whatsoever have ever been found to prove the existence of this creature, and there is no explanation for its origin beyond the supernatural myth.