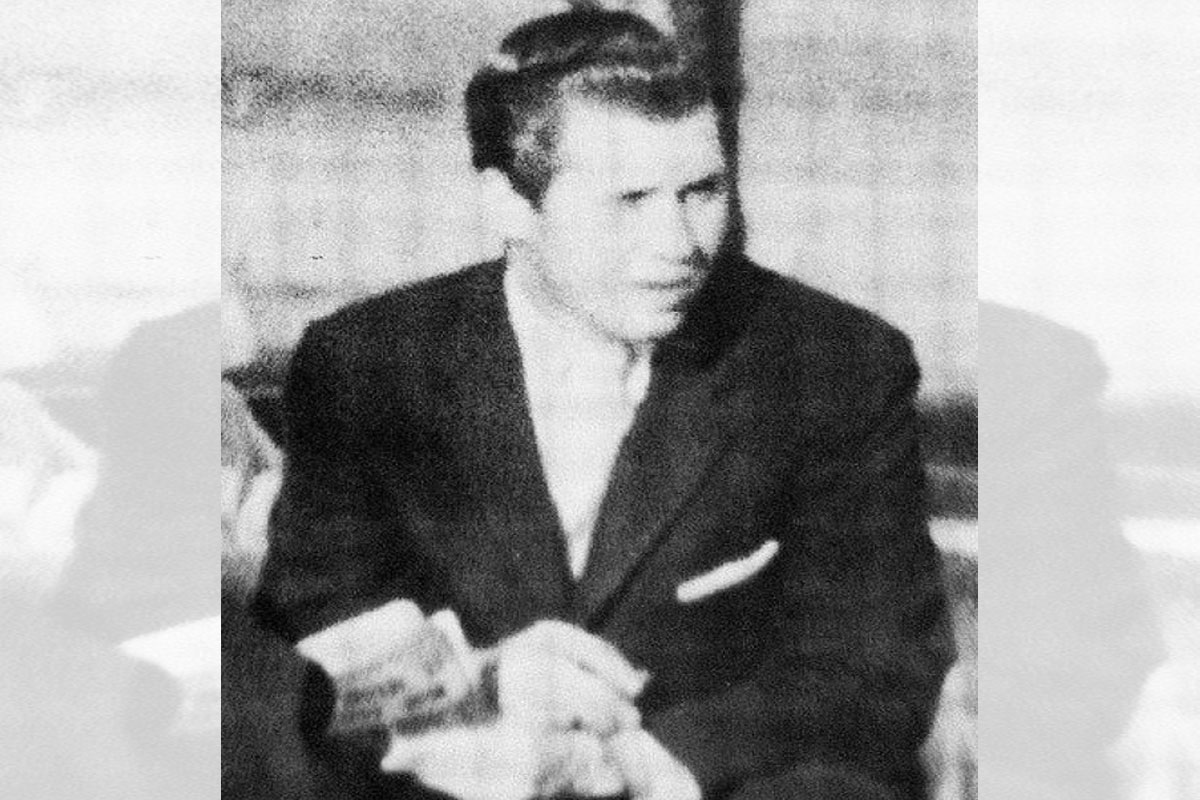 The Bonkers Story of the Alien Guest at the Pentagon

Every once in a while there is a case in the field that really raises eyebrows. These are the cases in which even the most open-minded and willing to believe are sometimes left speechless and wondering what to think. Such stories have become almost legendary within the field, and one of these is certainly the time a supposed Venusian emissary was a guest at the Pentagon.

In the winter of 1957, Harley Andrew Byrd, nephew to the late Rear Admiral Richard R.E. Byrd of the United States Navy, who was a high ranking official at the Pentagon in Washington D.C. and a part of Project Blue Book, got a harried and panicked call from the Police Department in Alexandria, Virginia. According to him, two policemen reported that they had seen a UFO had landed in a field, and a that tall man dressed in white had emerged, claiming to be from “The High Council” and calling himself “Valiant Thor.” This being was then purportedly picked up and taken to the Pentagon, where he was introduced to the Under Secretary of Defense, as well as Secretary of Defense Neil H McElroy, and then given VIP status and hurried off to see the president of the United States himself, Dwight D. Eisenhower, as well as the vice-president at the time, Richard Nixon. According to Byrd, Valiant Thor was from Venus, and spent some amount of time at the Pentagon speaking to the president about the world’s problems, and Byrd would say:

Commander James was on duty at the Security Clearance and Review for the branch officer of the Project Blue Book. He oversaw the meeting through official channels and reported the landing and meeting of the “space emissary”, as he was labeled by the Department of Defense, to a governing group of high military officials including Secretary of Defense F.F. Forestall and other scientific men of which there were twelve. They in turn made recommendations to the President and Cabinet members, the CIA, FBI, NSA, and so on. The landing of Valiant Thor was perhaps the first documented landing of a human-type alien by military officials. He contacted an individual in the Pentagon who was an advocate of the UFO alien situation. “Nancy Warren” in turn contacted a minister, who was also a private investigator and theologian, a Dr. Frank E. Stranges, who then met with this individual. Dr. Stranges had been a guest speaker at the National Evangelistic Center for two weeks.

Val Thor landed in Alexandria and met with the President to discuss the world’s problems and offer advice and counsel on how to deal with and eliminate them. He indicated to Mr. Eisenhower that the world was in a precarious situation and that if the world continued to proceed on a war footing – it would cause an economic imbalance throughout the world. He indicated that his race of people lived and dwelled underground and that many of the planets throughout the universe sustain life in this same manner. He also mentioned the waves of aliens who would land around the world to help with the Earth’s seemingly insurmountable problems. He stated that a group from a distant planetary system would be coming to give aid and data to help the Earth’s progress. 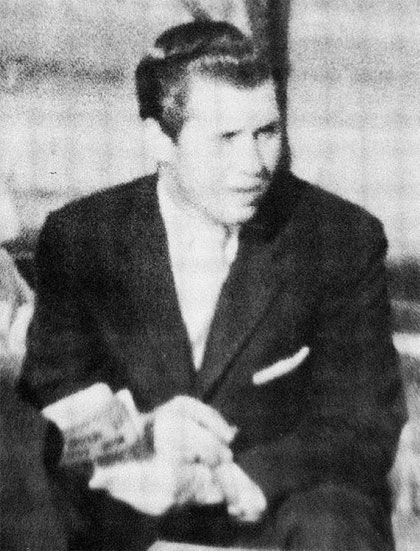 Richard Nixon was apparently fascinated by Val Thor, and allegedly said to him:

You have certainly caused a stir… for an out-of-Towner. Of course, we are not totally convinced of anything just yet. But suffice it to say we are checking and double checking everything you say and do. When Sergeant Young from Alexandria radioed in and stated that you had just landed in a flying saucer, we thought Sergeant Young had flipped. Say, were you in on that UFO flap over Washington? You certainly had us all in a dither, if you were.

Frank E. Stranges would have a personal meeting with the entity and give much information of these interactions between Valiant Thor and the government in his book on the matter, the 1967 Stranger at the Pentagon, and would also go into depth about the alien’s appearance and behaviors. Stranges said that Val Thor looked like a perfectly normal human being, except that he had six fingers on each hand and could live for 500 years, and it also turned out that he wasn’t alone, having actually arrived with three companions, called Donn, Jill, and Taniya. Val Thor supposedly told him that they had been watching humanity closely since the atomic bombs in World War II, and sought to “begin a new era in knowledge, wisdom and understanding on our planet.” Curiously, Stranges would also claim that Valiant Thor had a deep interest in Christianity, even going as far as to say that Jesus was in fact an alien from outer space, and had spread His word across the galaxy. This might not be so surprising since Stranges just happened to be a travelling Evangelical preacher, and he would say:

He told me that his purpose in coming was to help mankind return to the Lord. He spoke in positive terms…always with a smile on his face. He said that man was further away from God than ever before, but there was still a good chance if man looks in the right place.

Apparently, Valiant Thor stayed there in Washington D.C. for a full 3 years on his mysterious mission, before suddenly dematerializing in 1960 to return to his home planet. The story was published in Stranges’ book and went on to become firmly entrenched in UFO lore as one of the most completely bizarre accounts on record, going on to be much discussed and debated, and even appearing on TV shows and in the media. However, if you have been paying attention so far you may perhaps see why it has all drawn skeptics to it like moths to a flame. The list of gripes against this outlandish tale is long. For one, Venus is far from what one would consider a traditionally habitable planet, so why would it produce a race of beings nearly indistinguishable from humans? Also, where is all of the evidence? He was here for 3 years, yet the only evidence that has been offered are some photographs of a man in a suit said to be him and one of a group of some clean-cut young people who Stranges claims to be Val, Donn, Jill, and Tanyia, but who seriously could be anyone at all. it is all pretty flimsy at best. 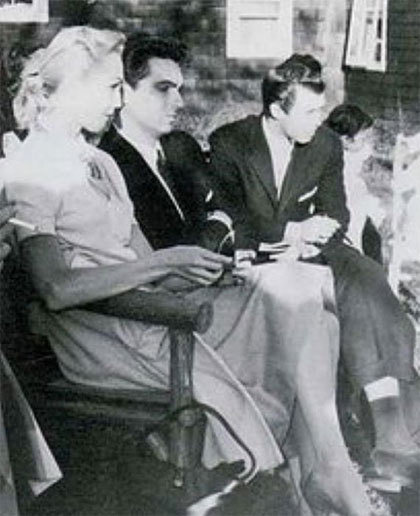 Valiant Thor and his Venusian friends

Another is that the credentials of Stranges and others involved in this case have been seriously called into question. There is no independent verification that Stranges ever had top security clearance at the Pentagon, and his self-proclaimed credentials have also been challenged, such as his assertion that he has Ph.Ds. in psychology, philosophy, and criminology, as there is no evidence that he ever earned such diplomas. It is curious, as he often calls himself Dr. Stranges despite being unable to prove that this actually fits. Indeed, there is no real corroboration on any of the people involved in any way. There is no evidence that a Harley Andrew Byrd ever had such top clearance at the Pentagon, or even that he had any relation to Admiral Byrd at all. Brian Dunning at the site Skeptoid would say of him:

“Harley Andrew Byrd” is probably not who he says he is. Records on Ancestry.com can’t really confirm or disprove the possibility that Admiral Byrd had a nephew by this name, but his story requires that he would have held a senior role at Project Blue Book with top security clearance and over a year of training behind him, all by the age of 18. When he went on Art Bell’s Coast to Coast AM radio show in 1995 it went south very quickly. He told ridiculous stories of Admiral Byrd’s adventures, including that the admiral entrusted him as a young boy with secret diaries telling of his contacts with aliens and Nazis. One listener wrote:

“[Harley Byrd] talks nonsense, makes all manner of bizarre claims about greys, sasquatch, Aryans, and other alien types, and assiduously commercializes the whole for profit… Harley Byrd is actually a huckster [who] merely poses as Byrd’s grandson to sell these bogus diaries.”

It certainly is all pretty out-there, and is likely to be scoffed at by most in the general mainstream. There are plenty of inconsistencies and red flags in the story, and yet it has become a pretty indelible mainstay within the field. For some it is one of those persistent stories we like to brush under the carpet and pretend doesn’t exist. For others it is a point of debate and discussion. For others still it is enough to make one just shrug their shoulders and wonder. Was Stranges telling the truth or is this all complete woo woo nonsense? Whichever side you fall on, the story of Valiant Thor has become fairly legendary, and at the very least is another one of the many other truly bizarre cases that inevitably pop up from time to time.

The Royal Australian Air Force Declares It Will Not Investigate UFOs

Intense Paranormal Forces and a Haunted Schoolhouse in Massachusetts