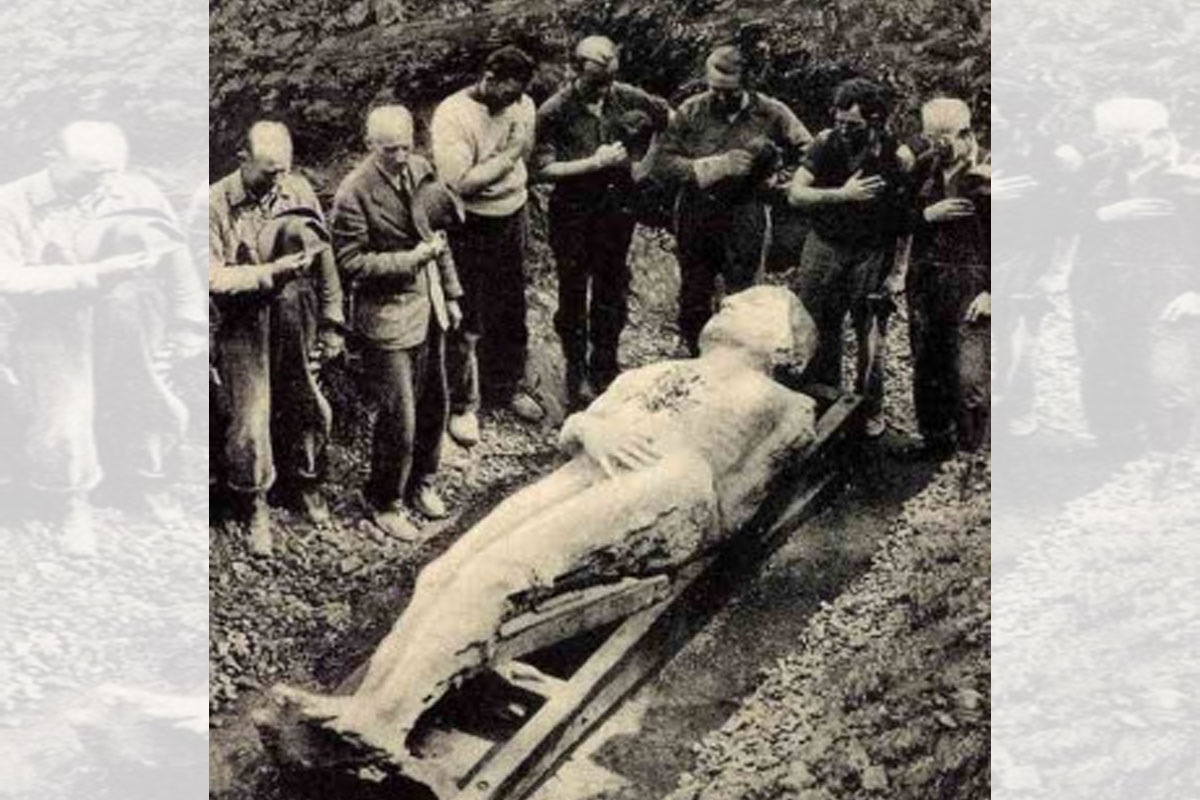 The Biggest Hoax In History (Literally): The Cardiff Giant

This stone giant, unearthed in 1869, was believed to be a giant from the time of Noah

Since the dawn of time, giants have been the subject of human myth, rumor, horror, and religion. From the iconic brute Goliath in the Old Testament to the creatively horrific Titans of Shingeki No Kyojin, giants have always been more and meant more to humanity than just anyone who stands head and shoulders above other people.

One day, in the late 1960s, a giant unearthed on a farm in New York shook scientists and religious leaders alike to their core. They discovered the Great Stone Man, the Cardiff Giant.

In the Fall of 1869, Gideon Emmons and Henry Nichols made a monumental archaeological discovery while digging a well on a farm outside of Cardiff, New York. The two men were digging for farm owner William Newell, and when they got three feet down, they hit stone. As they cleared away the dirt, they made out what seemed to be a human foot! 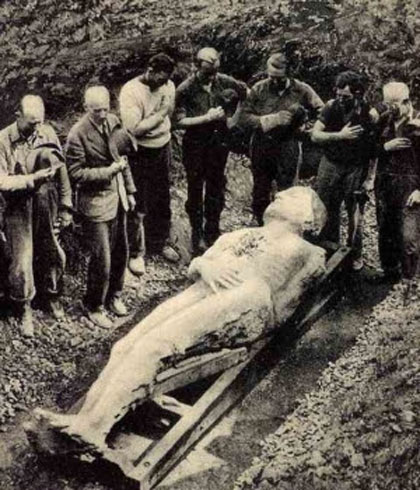 Unearthing the whole body, they discovered a 10-foot-tall petrified man, who would come to be known as the Cardiff Giant. The Giant hadn’t been reduced to a skeleton but appeared to have been petrified, and now made entirely of stone. Ribs, Adam’s apple, skin pores, and even a benevolent smile were all apparent on the stone figure. The two men thought it must have been a native American giant who had died a long time ago, but as they inspected more closely, it appeared something much larger was at work.

Newell immediately opened the giant’s tomb up for viewing. Carriages, buses, horse riders, and buggies came from all over to see what religious scholars were calling a giant that had perished in Noah’s flood. He initially charged 25 cents for entry, but quickly doubled it as the roads leading to his farm became choked with people.

Giants in the time of Noah? Well, your typical King James Bible barely mentions anything about giants during the great flood—just that they were there. A non-canon book of the bible, the book of Enoch, goes into more detail, implying that giants were corrupted angels who eventually helped build the Ark. Though the book is considered apocryphal, any mention of giants always seems to make a foothold in the minds of speculative archaeologists.

“There were giants in the earth in those days; and also after that, when the sons of ZGod came unto the daughters of men, and they bare children to them, the same became mighty men which were of old, men of renown.” Genesis 6:4

Away from the bustle, inside the viewing tent itself, onlookers fell silent, and no one dared speak above a whisper in the presence of the profound specimen. Light fell from the center of the tent on the giant lying in his grave. One arm cradled his stomach, as if in the throes of death pain, but a gentle smile was cemented in a state of eternal serenity. America’s attention was fixed on the Cardiff Giant, and scientists were even coming out with explanations on how the giant had come to be petrified.

At this time in history, emerging science and sideshow hoaxes were raging with popularity. At a time when biblical texts were taken quite literally—especially in revivalist New York—and were being challenged by the ideas of Charles Darwin, both common people, the clergy, and scientists were desperate to resolve the dissonance between religion and science. This made them ripe victims for a hoax as they readily accepted the blurring of the lines between observation and faith. P. T. Barnum himself offered to pay $50,000 for a share of Howell’s giant and to move it to New York City. When Howell refused, Barnum sent agents in to view the statue up close and had an exact replica created. This fake Cardiff Giant proved just as popular as the original, with few people calling it a fake at first.

The original statue was, of course, a forgery too, a hoax planted there by Newell’s friend George Hull. Both men were in on the hoax, but the idea came to Hull—an atheist—after arguing with a priest for hours about literal interpretations of the bible. Hull lie awake all night that evening, trying to think of the most ridiculous thing people would believe, and eventually came up with the idea of the Cardiff hoax. 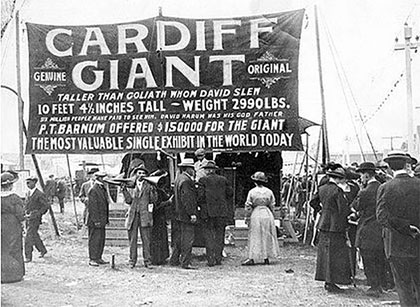 Hull spent years and thousands of dollars constructing the Cardiff Giant. All the work had to be done in secret as well. The five-ton block of stone used to make the statue was carved by an artist under the premise it was going to eventually be a tribute to Abraham Lincoln. He took the stone to a pair of sculptors in Chicago, posing as the model for the statue himself. When the carving was complete, they doused the whole thing in acid to give the stone a weathered look.

Of course, when he took Barnum to court to sue over the copy and a judge asked how he was so sure Barnum’s was a fake, he had to swallow his own lie and agree that both were real.

News about the origins of this pre-flood giant, however, eventually got out, and legitimate scientists decried it as a hoax. As pressures mounted, Howell and Hull sold the statue before admitting everything in a newspaper exposé. Hull had accomplished his goal though, he had made his point about the gullibility of the public and made a fistful of cash along the way.

Just seven years after the Cardiff Giant, “The Solid Muldoon” was found in the mountains of Colorado, but was once again a hoax perpetrated by George Hull! Unlike the Cardiff Giant, the Solid Muldoon had been made out of a mixture of dust, clay, plaster, bones, blood, and meat. By this time, the giant rush was in full force, and petrified men were popping up all over. Hotels and tricksters began cooking up their own giants as marketing stunts, none holding up under basic scrutiny, but still managing to collect up to $1 a person to see these giant forgeries.

Though Barnum had offered $50,000 for the Cardiff Giant, by the time mustachioed and side-burned novelty giants were hitting the scene, the fake giant market crashed. A petrified man “found” in Wind Cave, South Dakota, sold for just $2,000.

As the giants truly went extinct, most were destroyed, fell apart, or were lost to time. The hoax that started it all, however, survived and was returned to New York. It’s on display at the Cooperstown Farmer’s Museum, underneath a tent just like the one Howell displayed it under 150 years ago. 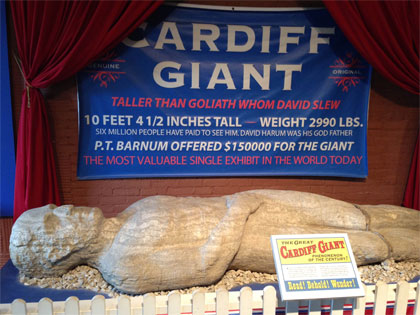 The Cardiff Giant is but one of many hoax giants that have made headlines in history. Whether it’s a still from a movie trailer shared on Facebook by your mother-in-law out of context, an apocryphal book of the bible, or a crudely captioned photo in your Instagram feed of a barely convincing skeleton scaled up next to someone standing in the desert, the giant myth is just too tall a tale not to tell.

But, here at Ripley’s a hoax can be a Believe It or Not! For being a hoax, but we’re even more interested when the truth is stranger than fiction. He may not be 10 feet tall, but at 8’ 11” Robert Wadlow, the tallest man in known history, wasn’t a giant discovered in a remote cave or desert, but a real, well-documented man who lived in Illinois in the 20th century!