Journal News / Mysterties / The Abominable Snowman: Taking a Look at a Creature That Doesn’t Get the Coverage it Should 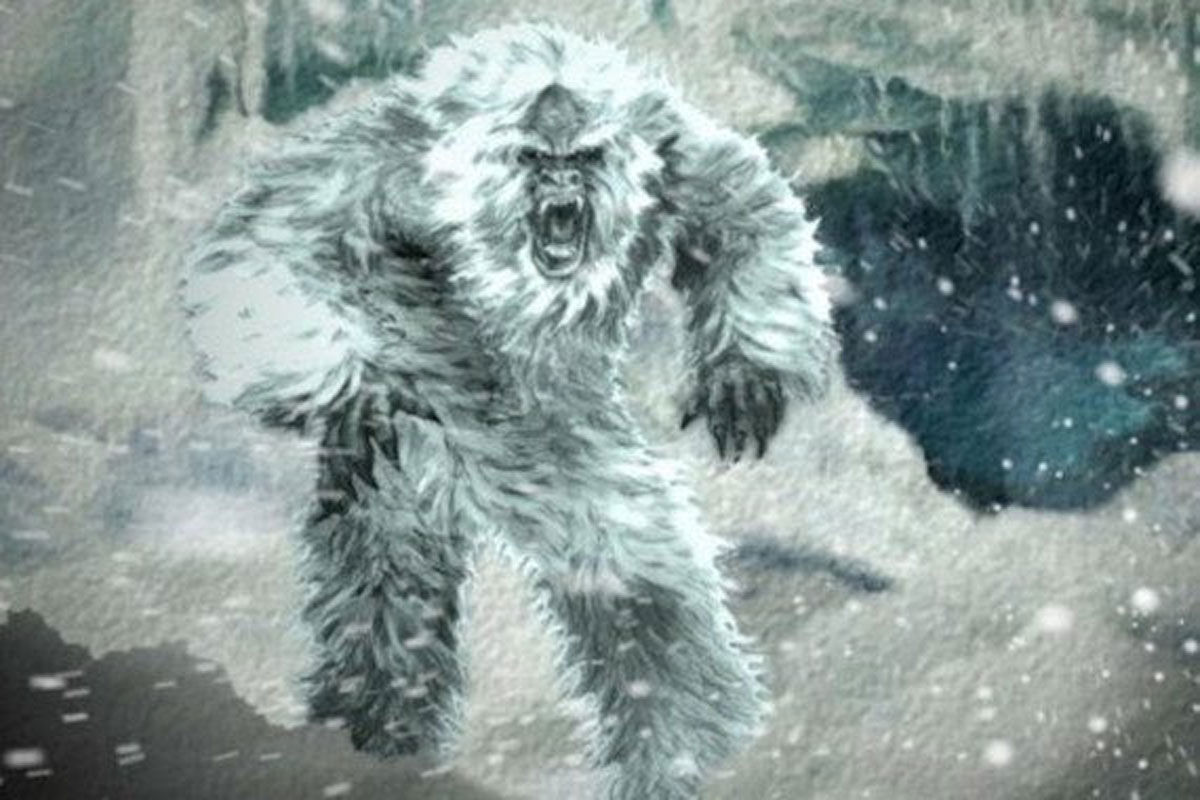 The Abominable Snowman: Taking a Look at a Creature That Doesn’t Get the Coverage it Should

Have you ever wondered why, in the field of Cryptozoology, there’s plenty of coverage of the likes of Bigfoot, lake-monsters, the Dog-Man, the Chupacabra and Mothman, but very little about the Yeti (also known as the Abominable Snowman, of course)? It’s a puzzle close to what the Yeti is itself! I’ve never really understood why there was a huge amount of coverage of the beasts in the 1950s, but that today, they’re hardly discussed. So, for those who don’t know much about the subject, read on. It’s time for a bit of coverage of the huge, lumbering things of the Himalayas. Get ready for some fascinating data and cases. Brigadier Henry Cecil John Hunt was a highly regarded mountain climber, a noted figure in the British military, and the author of a 1953 book, The Ascent of Everest. It was a book told of his expedition to the mountain – also in 1953. Hunt related a fascinating story of the Yeti that, during his mission to scale Everest, was given to him by the Abbot of the Thyangboche Monastery. Also referred to as the Tengboche Monastery, it stands at a height of almost 14,000 feet in the mountains of Nepal and is dominated by the massive Himalayas – the abode of the Yeti, or Abominable Snowman. Hunt, who, at the time of the expedition was in the employ of the Supreme Headquarters Allied Expeditionary Force, said of his visit to the monastery: 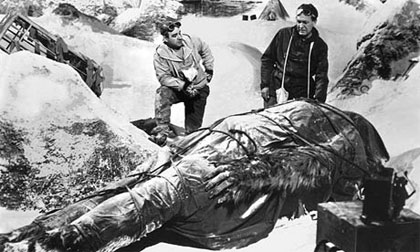 Actors Robert Brown and Forrest Tucker. Hammer’s “The Abominable Snowman of the Himalayas,” 1957.

“Seated with Charles Wylie and Tensing beside our host, a rotund figure in faded red, I questioned him about the Yeti – better known to us as the Abominable Snowman. The old dignitary at once warmed to this subject. Peering out of the window on to the meadow where our tents were pitched, he gave a most graphic description of how a Yeti had appeared from the surrounding thickets, a few years back in the winter when the snow lay on the ground.” According to the Abbot, the creature was grey haired, about five feet in height, and walked on both two legs and four, in what was described as a “loping” fashion. Evidently, the animal was not on the hunt for food, but happily contented itself by playing in the snow! Despite the apparent non-hostile nature of the good-natured, playful beast, “instructions were given to drive off the unwelcome visitor.” In Hunt’s own words: “Conch shells were blown and the long traditional horns sounded. The Yeti had ambled away into the bush.” 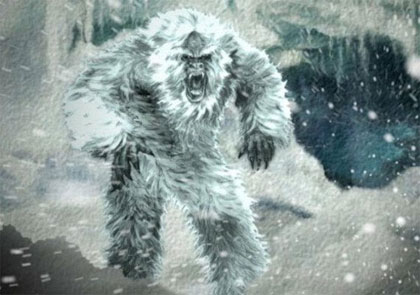 The Yeti, even though it’s not actually white!

Born in 1907, and an Order of the British Empire, Eric Earle Shipton was an expert mountaineer who, in the early 1950s, just might have secured photographic evidence of the existence of the Abominable Snowman of the Himalayas. It was in the late afternoon of November 8, 1951 that history went down, big time. This was Shipton’s fifth trek to the Himalayas, and specifically to Mount Everest. The group was a large one: also along with Shipman were Earle Riddiford, Edmund Hillary, Bill Murray, Michael Ward, and a variety of Sherpas. As the expedition came close to its end, Shipman, Sherpa Sen Tensing, and Michael Ward stumbled upon something extraordinary southwest of Everest, specifically on the Gauri Sankar, a 23,406-foot-high mountain that stands roughly sixty miles from Kathmandu. A summary of what was found appeared in the pages of Eric Shipton: Everest & Beyond, by Peter Steele: “Shipton took photographs of Ward standing beside the tracks. Lower down they were more distinct with sharply defined edges, twelve inches long by five wide; a big rounded toe projected slightly to one side, the second toe was separate, and the lateral three toes were smaller and grouped together. To give an idea of the scale, Shipton photographed his ice axe and Ward’s boot beside one of the prints, which appeared to have been made with a day or so. Ward, even now, says the footprints were absolutely as Shipton described them.” 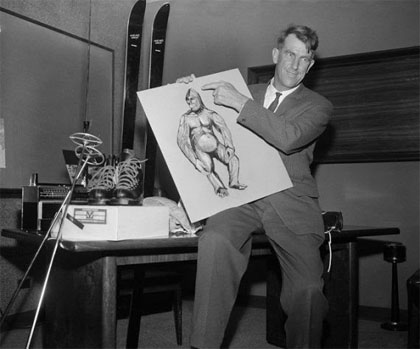 The Long Walk is a book that was penned in 1956 by a man named Slavomir Rawicz. His book is a highly readable one. It is told in adventurous, captivating style, and tells of his dicey and daring escape – with various comrades – from a brutal Siberian prisoner of war camp as the Second World War raged, specifically in 1942. It’s a book that has a significant role to play in the matter of the Abominable Snowman, since Rawicz claimed that he and his fellow escapees encountered no less than two such creatures on the harsh snows, as they hit the road to freedom. Problematic, however, is the fact that a number of researchers have questioned the truthfulness of Rawicz’ account. It’s fascinating, it’s eye-opening and it’s almost jaw-dropping. But, is it real? That’s the big question. There’s no doubt that there are a few significant holes in the story, and specifically in regards to the months-long journey allegedly made from the POW camp to the Himalayas. As far as the Yeti encounter is concerned, we are, unfortunately, only able to take Rawicz at his word – or not, as the case may be.

Just one year before the turn of the 20th Century, Laurence Waddell’s book, Among the Himalayas, was published. In the book, Waddell described how a number of Tibetans had told him of huge, hairy, ape-like animals that moved like people and which lived in the mountains. Waddell put little faith in the accounts, despite having personally come across some intriguing, large footprints in the snow. The reports from Hodgson’s team, coupled with that of Waddell, provoked short waves of interest; it wasn’t, however, until the 1920s that matters heated up. The Everest Reconnaissance Expedition was launched in 1921, under the leadership of Lieutenant-Colonel Charles Howard-Bury, of the British military. No-one on the expedition anticipated coming across anything unusual, but that was exactly what they found, in the form of huge, human-like footprints, thousands of feet up in the snow-covered mountains. 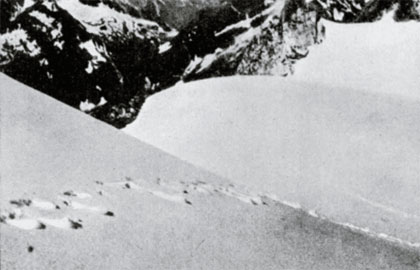 Footprints purported to have been made by the Yeti, photographed in 1953.

Bernard Heuvelmans, one of the most important figures within the field of cryptozoology said that during the course of his research into the Yeti of the Himalayas, he had learned of no less than three distinct kinds of creature that roamed the vast mountains. “This opinion,” said Heuvelmans, “was confirmed in 1957 by a Tibetan lama called Punyabayra, high priest of the monastery at Budnath, who spent four months in the high mountains and brought back the surprising but valuable information that the Tibetan mountain people knew three kinds of snowmen.” There was the rimi, a man-beast of close to three meters in height that dwelled in the Barun Khola valley, in eastern Nepal, and which was specifically omnivorous. Then there was the rackshi bompo, a beast of roughly human proportions, and which Heuvelmans said “must be the Sherpas’ reddish yeh-teh or mi-teh which leaves the footprints 20 to 23 cm long that the Daily Mail expedition…found in such quantity.” Finally, there was the imposing and terrifying Nyalmo. Heuvelmans came straight to the point: “The nyalmo are real giants, between 4 and 5 m high, with enormous conical heads.” He continued: “They wander in parties among the eternal snows above 4000m. In such empty country it is hardly surprising that they should be carnivorous and even man-eating.”

J.J. Abrams’ Mission to Expose the Truth About UFOs