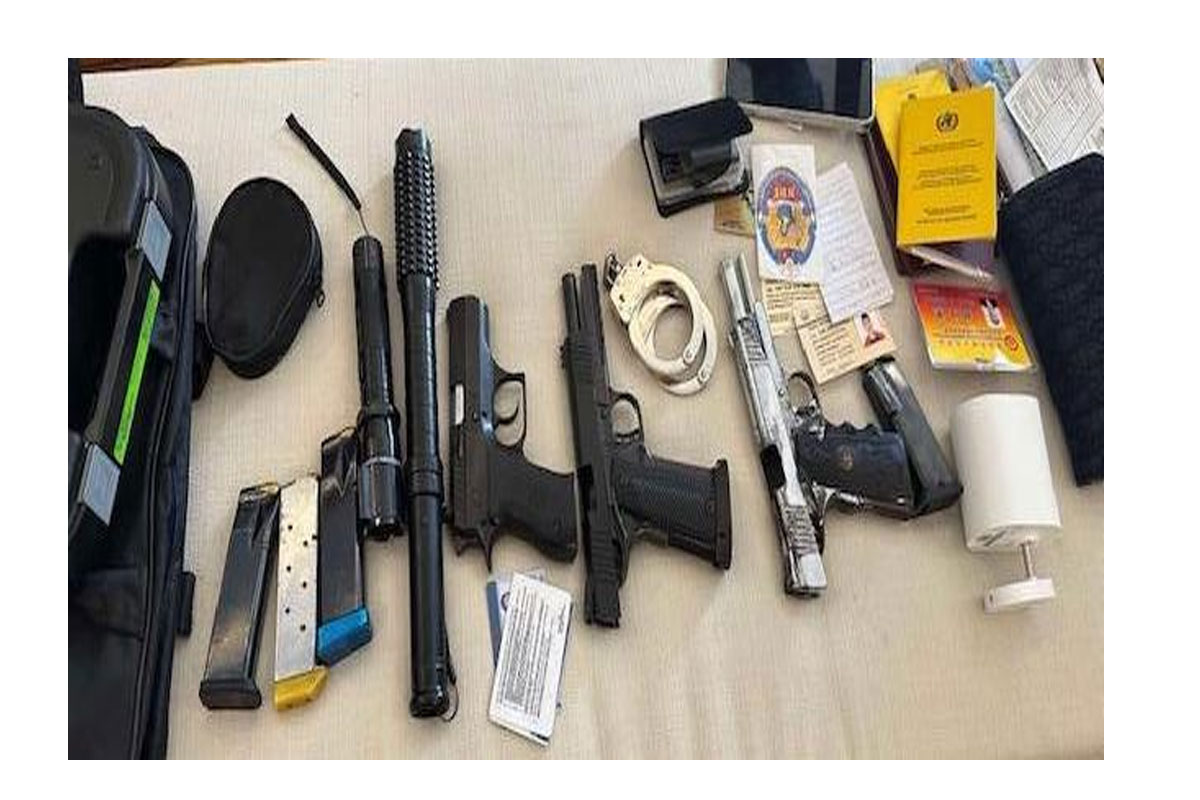 The guns seized from the arrested suspect.
Metro,

THE kidnapped POGO employee screams his guts out as his torturers mutilate him with evil delight. Fluids spurt from his bodily cavities during the filmed mutilation. Helplessly, the unlucky prey’s relatives could only screech in horror as they watch the torture online.

This is probably the grim scenario that occurs during the alleged torture of kidnapped POGO employees, an illegal activity that has been busted by the National Capital Region Field Unit of the Philippine National Police Criminal Investigation and Detection Group following the arrest of a wanted Chinese national accused of working as a ‘POGO goon.’

Marantan said they have learned that the accused underwent plastic surgery to escape detection by authorities. However, a tip from reliable sources enabled the CIDG team to establish the real identity of the suspect.

“At the time of his arrest, the accused yielded two guns and different IDs with his photograph but bearing different names, a manifestation that he is using fictitious names to prevent law enforcement agents from discovering his involvement in criminal activities in the country,” the official said.

The CIDG-NCRFU chief said they have also received reports that the accused had previously gained notoriety for ‘torturing’ abducted POGO employees in front of cell phone cameras and sending the ‘torture video’ to the victims’ relatives abroad in order to force them to pay huge ransom money thru bank transfer.

Col. Marantan said they are checking with other law enforcement units the background of the suspect particularly when it comes to ‘torture videos’ of Chinese nationals and other Asian POGO workers who have been circulated in the past.

The official said that around 1:30 p.m. last Wednesday, a team of CIDG-NCRFU operatives led by Lieutenant Adian Binalay arrested the suspect on the strength of a warrant for violation of Republic Act 9208 or the Anti-Trafficking in Persons Act as amended by RA 10364 or the Expanded Trafficking in Persons Act of 2012 issued by Judge Phoeve Castillo Meer of the Las Piñas City Regional Trial Court Branch 375.

Before being subdued, the suspect allegedly tried to escape and locked himself inside his room before trying to wrestle with the CIDG officers who were able to break open the door. The suspect was eventually handcuffed.

Col. Marantan said the suspect tried to conceal his true identify during initial investigation and presented numerous fake identification cards as he tried to convince the CIDG-NCRFU team that he is not the same person named in the warrant of arrest issued by Judge Meer.

Recovered from the possession of the suspect were one Armscor caliber .45 pistol with a magazine containing eight live ammunition, one Jericho 9mm pistol with a magazine containing 12 bullets, suspected fake PNP Permit-to-Carry-Firearms-Outside-of-Residence and License to Own and Possess Firearms under the name ‘Jason Vego Chen’ and a suspected fake Philippine passport.

An investigation is now underway on how the suspect who happens to be a foreigner managed to acquire the two firearms and the suspected fake gun papers.

Nine other Chinese nationals who were with the suspect at the time of his arrest were also apprehended for allegedly trying to meddle with the CIDG operation. They were brought to the CIDG-NCRFU headquarters for investigation and possible filing of charges for obstruction of justice.

Col. Marantan has requested Bureau of Immigration Commissioner Norman G. Tansingco to order a full record check and further investigation on the person of the accused whom he also recommended to be placed under the BI custody pending the result of the criminal charges filed against him.

The official said they have learned that the suspect has a ‘derogatory record’ in BI and already has a deportation order “Hi continuous stay in our country would be detrimental and bring disturbance to our peaceful community,” he added.

Marantan said that in the event that the accused is allowed to post bail for his temporary liberty, ‘his presence in the outside world may bring danger not only to the Filipino people but to all persons living in our country.’