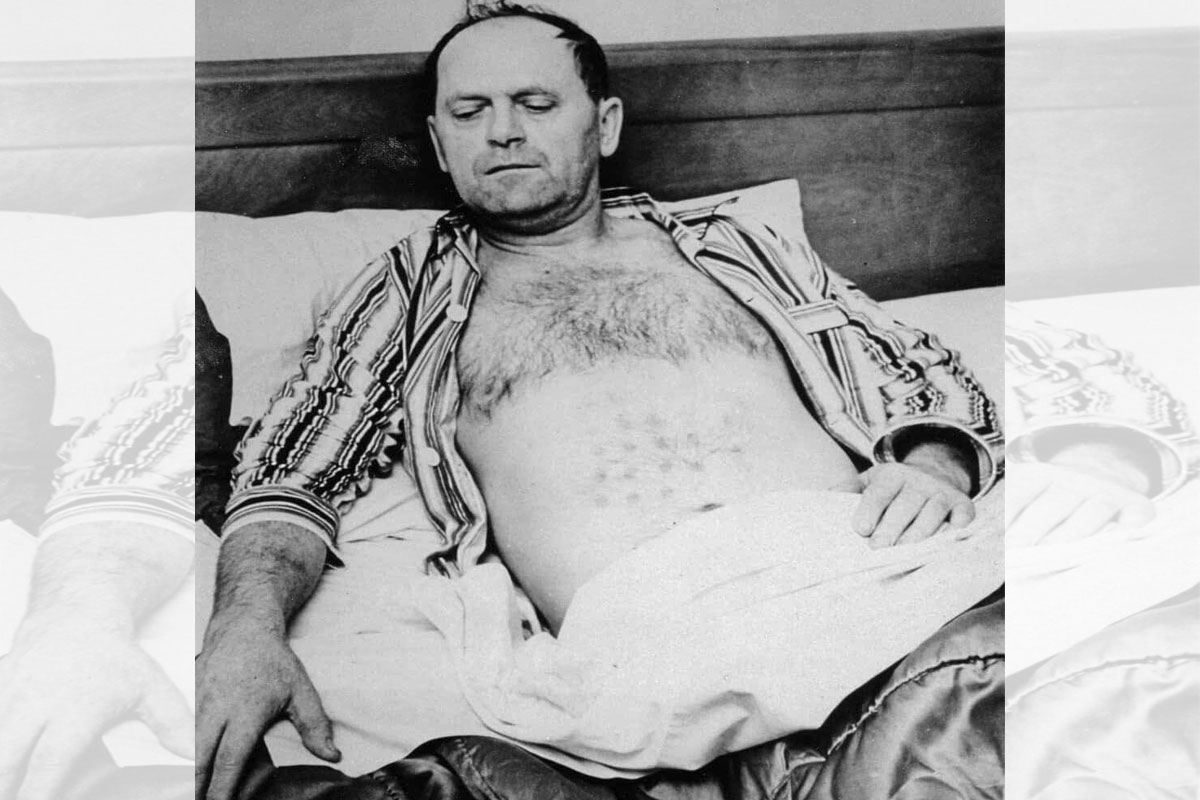 Do you know that Manitoba (Canada) has the highest number of UFO sightings in the past 200 years? According to a 2015 poll, over 2000 UFO sightings have been recorded. Among these sightings, Stefan Michalak’s case is the most discussed UFO encounter that happened in 1967 near famous Falcon Lake in the Canadian province of Manitoba. Not only we are talking about seeing an extraterrestrial flying craft but also about a contact made between the victim and the craft that resulted in serious burns.

On May 20, 1967, 51-year-old Stefan Michalak, an industrial mechanic and amateur geologist left his motel at around 5:30 in the morning and went to Falcon Lake to prospect for the quartz rocks.

Suddenly, his attention was attracted by two oval objects, appearing in the sky with reddish glowing. He noticed the objects coming down at great speed towards the ground, but one of them hovered and stopped in the air, while the other one continued descending and landed about 50 meters from it. 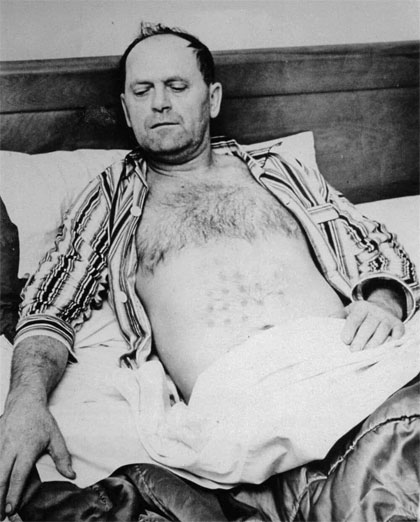 Stefan Michalak with burns on his chest after encountering a UFO near Falcon Lake, Canada

After some time, the UFO that was in the air changed its color from red to grey and flew away to the west. The object that landed near it also glowed grey at first and then changed to a color similar to “hot stainless steel,” surrounded by a golden-hued glow.

Michalak’s mind was full of curiosity but at the same time, he was scared. For 30 minutes, he was standing near the rock where he was examining quartz formation and drew a sketch of the saucer-shaped object. According to him, the UFO was 12 meters in diameter and 4.5 meters in height.

Anyway, he decided to check it closely. As he approached 60-feet from the object, not only he heard the hum and the smell of sulfur, but he also heard two humanlike voices emanating from the hatch at the bottom of the UFO, which looked like a door. 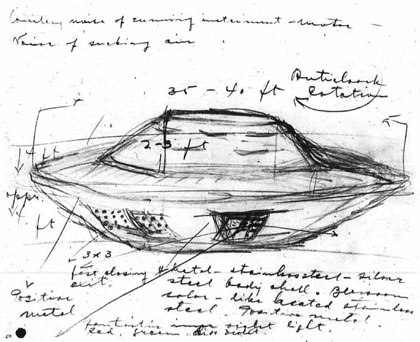 A sketch by Stefan Michalak

At first, he thought that the object was an American experimental test vehicle, so he sarcastically said: “Okay, Yankee boys, having trouble? Come on out and we’ll see what we can do about it.”

Having received no answer, he tried greeting in different languages, but still no response. Therefore, without any second thought, he put his head into the half-open hatch and saw something like a dashboard and a huge number of glowing lights.

As Michalak was examining quartz rocks, fortunately, he was wearing safety goggles so that the bright light could not blind him. But then, the hatch suddenly closed again, and he quickly recoiled not to be pinched. At the same time, he touched the outer surface of the mysterious spaceship which burned his glove, so received a burn on his hand. Next, the craft changed its position and a gridlike exhaust vent was facing toward him. A hot gaseous substance was thrown out of it in his direction. His clothes immediately caught fire, and only with great difficulty, he managed to extinguish the fire. The UFO flew into the air and disappeared, leaving Michalak alone with severe pain and nausea. 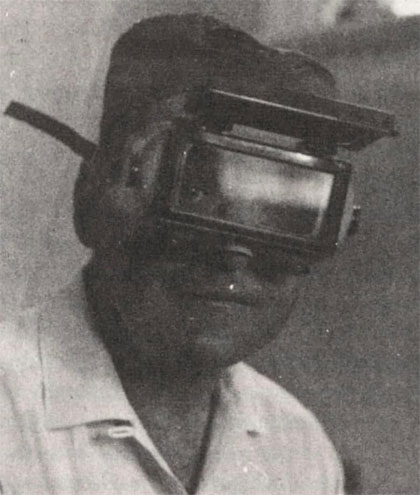 Stefan Michalak with his welding goggles

“I’m not so close-minded that I can’t entertain the possibility that it’s otherworldly. I can’t discount that. But without specific evidence to show me that it is, I don’t know. What I can tell you is that I’m an aviation fanatic, a huge aviation buff, and I am very familiar with how aviation technology has advanced in the past 50 years. And there was nothing even close to that in the works anywhere at that time,” Michalak said.

Aftermath Of The Encounter

During a subsequent medical examination, doctors found burns on his chest in the form of a mesh pattern, which fully corresponded to his story. In the following months, he had to contend with health problems such as loss of appetite, weight loss, swelling, and fainting. Michalak died in 1999 at the age of 83. 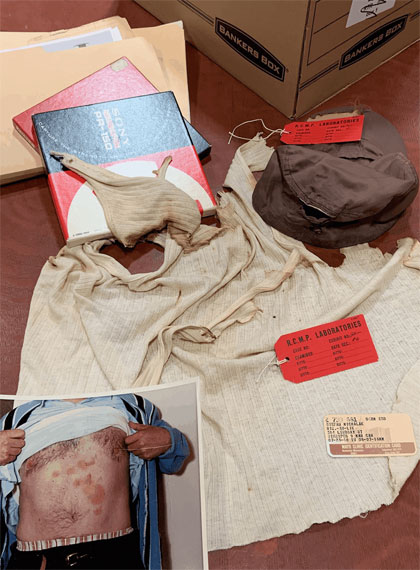 Stefan Michalak and his alleged encounter with the alien craft at Lake Falcon has been the subject of a big research, and Canadian UFO researcher Chris Rutkowski, who co-authored the book

“When They Appeared” with him, spent many years studying and collecting countless documents, statements, photographs and personal belongings of Michalak.

Rutkowski told the reporters that Michalak had been treated at the Misericordia Hospital, where he was examined by doctors for the first time. Then he was transferred to the Mayo clinic. The Royal Canadian Mounted Police and the Royal Canadian Air Force, who were investigating, admitted that they had no explanation for what had happened. 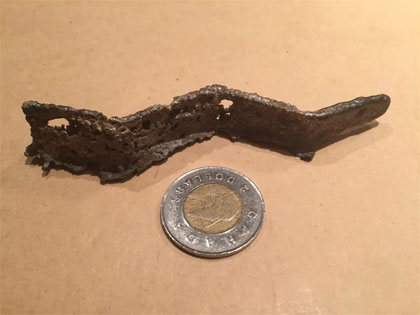 During the investigation, Michalak’s welding gloves and shirt were examined but nothing could be found in the analysis. A circle of 4.5 meters left at the landing site and area was declared radioactive.

More than 50 years after the incident, Rutkowski transferred all documents and items related to this case to the archives of the University of Manitoba.