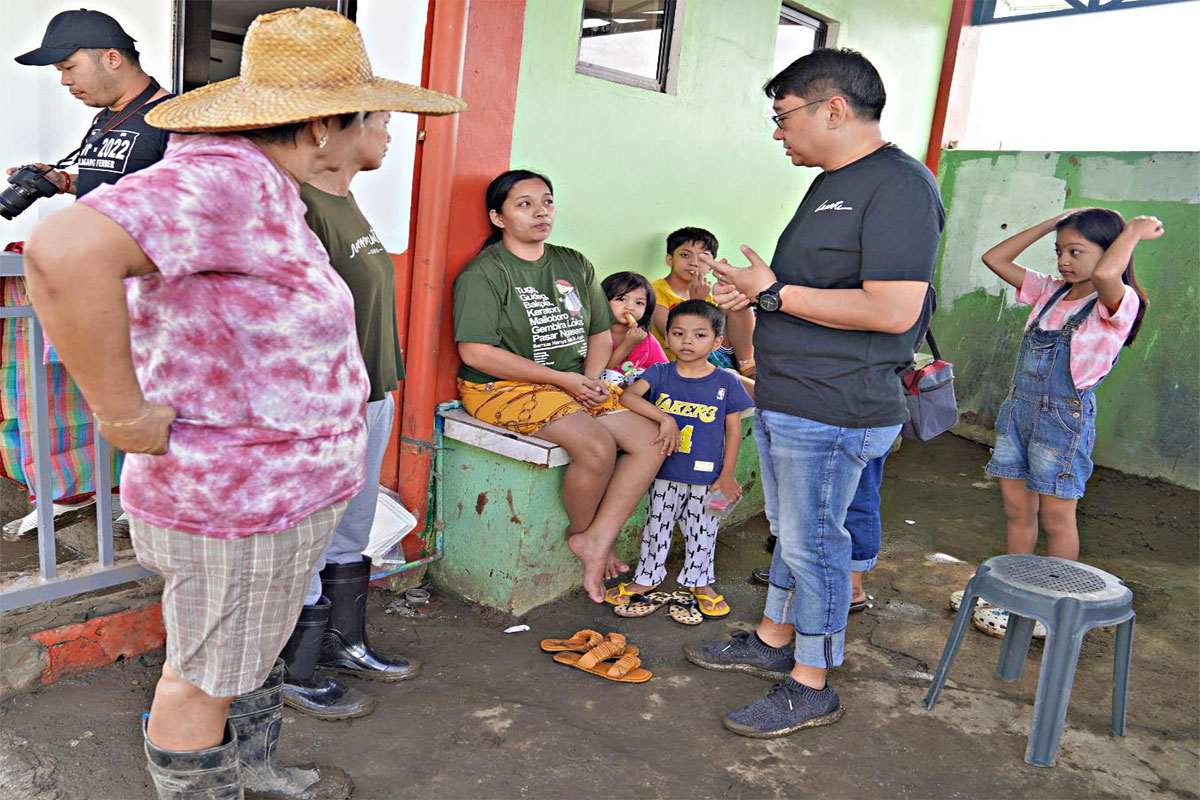 GenTri Mayor Luis Ferrer IV talks to the mother of Jhon Christian Yuson, who drowned Saturday night after he fell into the Bacao River in Bgy. Bacao 2 during an inspection on the aftermath of typhoon ‘Paeng’ while some portions of the barangay are still left with mud. Photos by Dennis Abrina
Provincial, 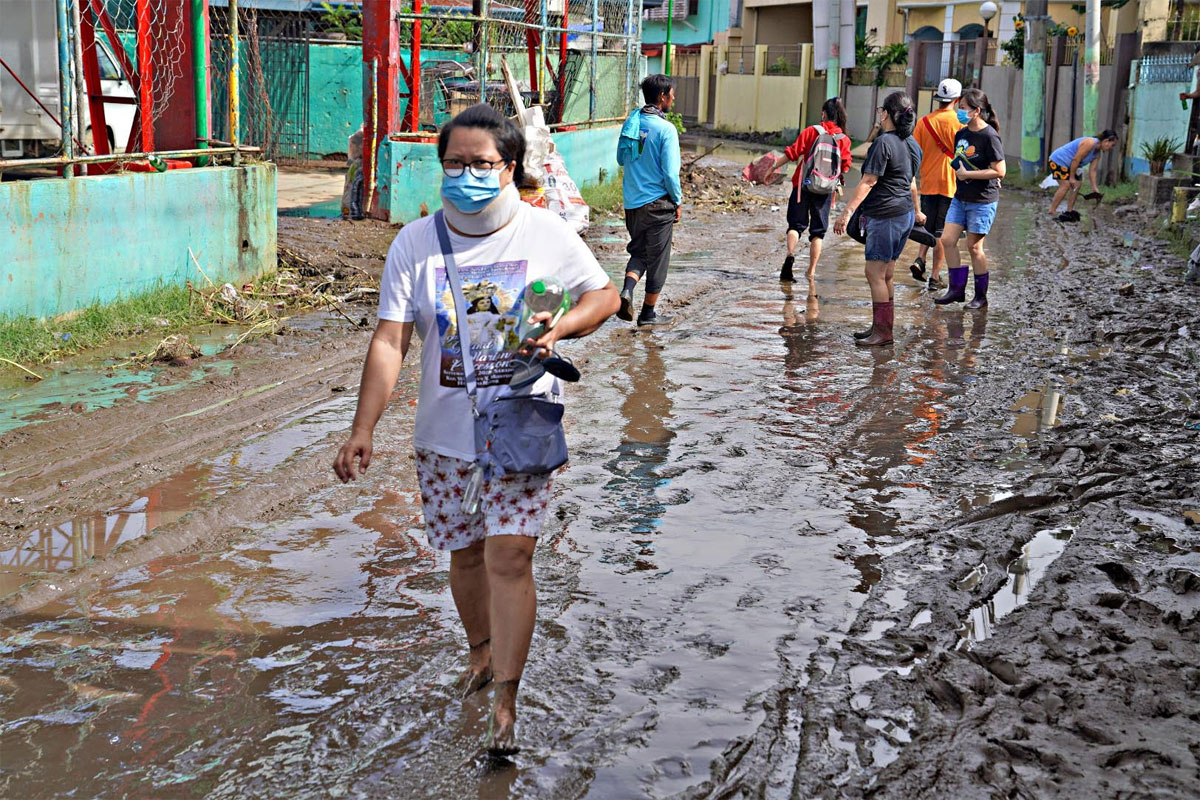 TRECE MARTIRES CITY, Cavite – Due to the massive damage of severe tropical storm “Paeng”, the Sangguniang Panglalawigan (SP) or the Cavite Provincial Council under Vice Governor Athena Tolentino unanimously approved and placed the entire province under a “state of calamity” during the 1st special session of the 11th SP via teleconferencing, Sunday, October 30, 2022.

The provincial council presided over by Acting Vice Governor Shernan Jaro approved Resolution No. 2195 -2022, “A resolution declaring the entire Province of Cavite under a state of calamity due to onslaught of severe tropical storm Paeng” – authorizing Governor Juanito Victor “Jonvic” Remulla Jr. to utilize the amount of P50 million from the Quick Response Fund (QRF) of 2022 Provincial Disaster Risk Reduction and Management Fund for the relief efforts of the provincial government.

The said action was sponsored by Cavite 5th District Board Member Aidel Belamide, Chair, Committee on Funds, Budget and Appropriation, and co-sponsored by all the members of the SP minus Vice Governor Athena Tolentino and Board Member Irene Bencito who are on their official leave.

Based on the rapid damage assessment and needs analysis conducted by the Provincial Disaster Risk Reduction and Management Office (PDRRMO), there is widespread destruction of crops, livestock and poultry farms in Magallanes, Maragondon, Naic, Ternate, and City of General Trias and reported damage of river walls in General Trias and Noveleta and total of 4,000 displaced families or around 13,400 individuals.

The said calamity fund provides a quick response to allocate for the relief and recovery program to help the living conditions of people in communities stricken by Typhoon Paeng (International name: Nalgae).

Gov. Remulla reported around ten individuals died, and 60,000 families were affected during the onslaught of the typhoon.

Authorities identified some of the victims as Jhon Christian Yuson, who drowned Saturday night after he fell into Bacao River in Barangay Bacao 2 in General Trias City when his house was hit by floodwater; Fernando Borife, a bedridden person who fell from his bed and drowned on Sunday as flood engulfed his house in Barangay Tramo-Bantayan of Kawit town; and Mark Robin Silvestre, also from Kawit, who died from electrocution around 3:00 a.m. Sunday, while trying to fix the electric breaker in their house in Barangay Aplaya at the height of the storm.

Two Cavite local government units canceled their respective school return that should have been scheduled on November 2; instead, it was extended for the recovery of each school here as announced by local chief executives of Noveleta, Kawit, and General Trias City Tuesday, Nov. 1, 2022.

According to Noveleta Mayor Dino Chua, classes are suspended on all levels starting November 2 to November 4, 2022 to give schools a chance to prepare and recover and will resume on Monday (Nov. 7) as some schools were used as evacuation centers.

In Kawit, Mayor Angelo Aguinaldo declared “no classes” in all public and private schools in the locality to give ample time to repair the damage caused by “Paeng” based on his social media page post.

Meanwhile, the Batangas Police Provincial Office (BPPO), under the leadership of Provincial Director P/Col. Pedro D. Soliba is helping in the clearing and search and rescue operations after Paeng struck Batangas province with signal no. 3 intensity.

The office of the provincial headquarters immediately ordered its Reserve Standby Support Force (RSSF) to assist in relief and rescue operations.

312 families or 1,002 individuals affected by the typhoon have been evacuated.

There was a reported power interruption in the towns of Alitagtag, Bauan, Laurel, Lobo, Malvar, Mataas na Kahoy, Nasugbu, Talisay, Tingloy, Tuy, and the City of Lipa.

Meanwhile, around 80 passengers were stranded at the Ceres bus terminal.

The police continue to conduct rescue operations for residents who were forced to evacuate due to the destruction of typhoon Paeng which caused heavy damage to the province.

BBPO reminded the public to be vigilant about the condition of areas that may be severely affected by the tropical storm.

“The PNP is always ready to respond to the threat of calamities and encouraged to follow the notice of the authorities to be safe,” Soliba said. By Dennis Abrina and Jojo Cesar Magsombol