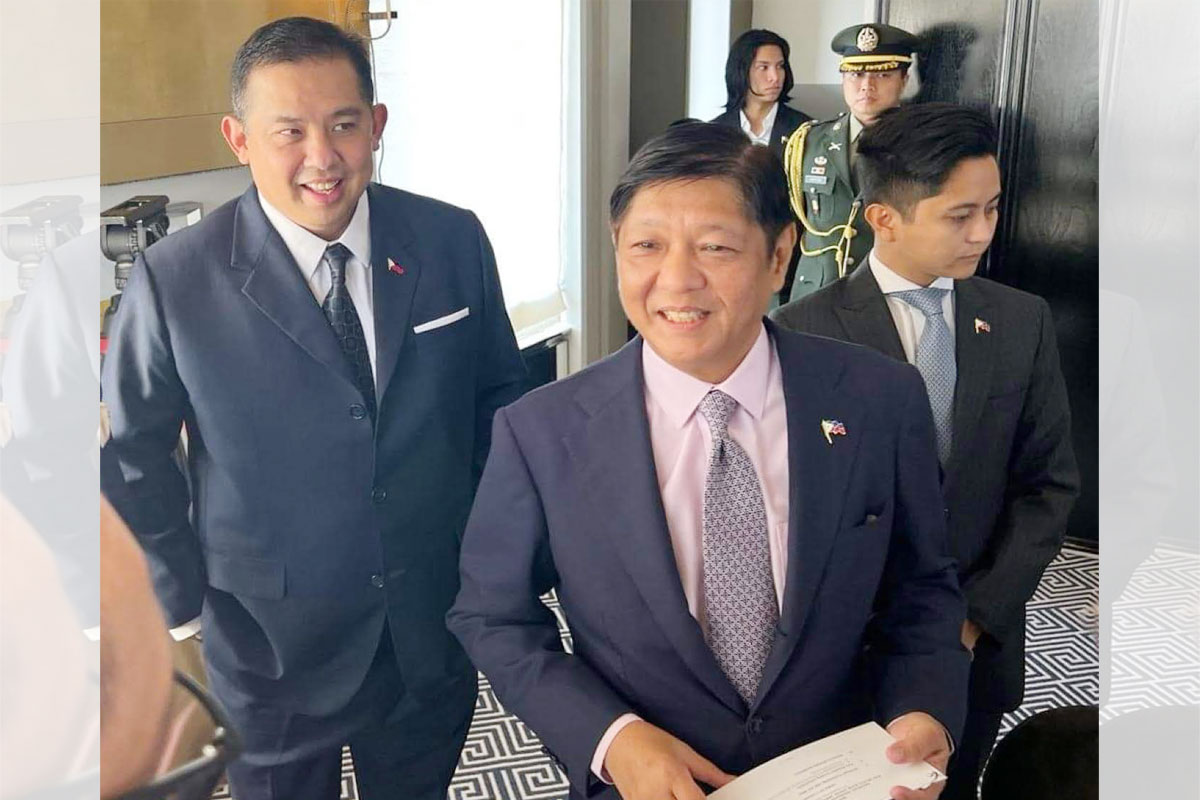 “We commend congressional leaders led by Speaker Martin and Senate President Migz (Zubiri) for delivering on their earlier agreement in a caucus to pass before our first legislative break this October the bill requiring the mandatory registration of SIM (subscriber identification module) cards of both postpaid and prepaid celfone subscribers,” Villafuerte said.

Villafuerte issued this statement after the House passed by a 250-6 vote with one abstention the consolidated measure on the “SIM Card Registration Act,” which combined House Bill (HB) 14, as principally authored by Speaker Ferdinand Martin Romualdez together with Ilocos Norte Rep. Ferdinand Alexander Marcos and Tingog Reps. Yedda Marie Romualdez and Jude Acidre, and with 15 other similar bills, including HB 2113 introduced by Villafuerte and three more Camarines Sur representatives.

On the same day that the House gave its final nod to this measure, the Senate also passed its own version (Senate Bill or SB No. 1310).

Romualdez, Zubiri and other leaders of both legislative chambers agreed in a September 8 caucus to pass before the first legislative break of the 19th Congress the bill postponing the Barangay and Sangguniang Kabataan (SK) elections originally set this Dec. 5 by a year to Dec. 4, 2023 as well as the measure on the mandatory registration of the SIM cards of both postpaid and prepaid celfone subscribers.

The House has already passed the barangay/SK poll postponement bill on third and final reading, while the Senate has passed its own version on second reading. The House has also been holding plenary deliberations on the proposed General Appropriations Bill (GAB) with the goal of approving it before the congressional recess.

The 19th Congress will have its first recess beginning Oct. 1 and will reopen sessions on Nov. 7.

The House, in passing the consolidated bill on third and final reading last Sept. 19, approved the recommendation by the House committee on information and communications technology (ICT) chaired by Navotas Rep. Tobias Tiangco to adopt the Romualdez-led HB 14 in consolidation with 16 other related measures.

The authors of the consolidated bill believe, according to Villafuerte, that the mandatory registration of the SIM cards of both postpaid and prepaid celfone subscribers would be a deterrent to the commission of mobile phone because (1) cyber criminals would no longer be able to commit their crimes incognito by using false identities, and (2) law enforcement agencies would find it easier to solve crimes that involve the use of cellular phones.

Villafuerte said, “The swift congressional passage of the proposed SIM Card Registration Act is a must for the 19th Congress to better protect all mobile phone subscribers against the barrage of phone-based scams like smishing, particularly now when digital tricksters have managed to get more personal information, including the actual names of celfone users they intend to swindle.”

‘Smishing’ refers to the short message service (SMS) phishing in which scammers try to hoodwink unsuspecting celfone users into giving them personal information, like passwords and credit card numbers, that these bilkers can use to commit identity theft to, for example, duplicate the victims’ credit cards or withdraw money from their bank accounts.

By writing new legislation requiring all postpaid and prepaid celfone subscribers to register the numbers of their phone SIM cards, Villafuerte said “it will be easier for the authorities or PTEs (public telecommunications or telco entities) to trace persons behind text scams and hold them accountable for breach of privacy along with celfone-based fraud and other punishable offenses they are able to perpetrate by using unknown or unregistered mobile phone numbers.”

To get an idea of how prevalent fone-based scams have become, especially during this pandemic season, Villafuerte said telco Globe Telecom recently claimed blocking 784 million scam and spam messages this January-July 2022 period alone; deactivating 14,058 scam-linked SIM cards; and blacklisting 9,973 others.

“The Philippines has been dubbed as the fastest-growing digital economy among major ASEAN (Association of Southeast Asian Nations) member- states, registering a whopping 93% year-on-year expansion from 2020 to 2021. This figure speaks volume of how Filipinos have become reliable on the advances of technology especially when it comes to the convenience of online transactions,” said Villafuerte.

“But the apparent helplessness of our authorities in stopping cyber criminals from preying on millions of celfone users through smishing and other scams has become the darkside of the digital transformation in our country where there are more mobile phones than people,” Villafuerte said.

“Hence, it is high time that we secure our mobile SIM cards from the proliferation of phone-based frauds through the mandatory registration of both prepaid and postpaid subscribers,” he said.

According to datareportal.com, there are 156.5 million celfone users in our country that has, said the Philippine Statistics Authority (PSA), a population of more than 109 million people as of May 2020.

In HB 2213, Villafuerte and his co-authors pointed out that, “The use of cellular phones is in fact attached to our everyday lives from entertainment to utilities and communications. Daily contacts are being made in the screens of our mobile phones. We communicate miles away and pay our bills with just one tap. Our reliance with technology has been undeniable for the past decade.”

They stressed in their bill that this proposed measure will “serve as a blanket, clothing our mobile phones with proper identity and contact in cases of loss and for future ease of transactions.”

Such mandatory registration is timely, they said, and is “aligned with the goals of the National ID System (Philippine National Identification System or PhilSys), which are to lower costs, streamline transactions and provide ease and convenience, in step with the rapid, and most of the time disruptive, innovations in ICT and mobile telephony.”

They pointed out that “the illegal or malicious use of fast-changing ICT developments endangers people’s lives, damages property, poses hazards to public order, and even threatens the security of nations. Thus, there is a need to promote accountability in the use of SIM cards and provide law enforcement agencies the tools to resolve crimes that involve its utilization and the platform to deter the commission of wrongdoings.”

HB 2113 has ordered PTEs or direct sellers to require their end users or subscribers to present valid identification documents with photos to ascertain their identities when they acquire SIM cards for their celfones.

The PTEs or direct sellers are further directed in the bill to require their end users to accomplish and sign control-numbered registration forms for their purchased SIM cards.

These registration forms shall include an attestation by the end users that the persons appearing before the direct sellers are the same persons who accomplished and signed the registration forms, and that the identification documents presented herein are valid and correct.

Failure of end users to comply with this requirements under HB 2113 shall be a ground for the PTEs or direct sellers to refuse the sale and issuance of SIM cards to these buyers.

Except in cases where the PTEs are the direct sellers, this bill states that the accomplished registration forms must be submitted to the concerned PTEs within 15 days from the dates of sale.

All direct sellers are mandated under the bill to register the following information in the SIM card registration forms given to every buyer or registrant: full name, dates of birth, gender and address of the end user appearing in a valid government-issued ID with photo, like the driver’s license; passport; National ID; and the official ID of a taxpayer, senior citizen or person with disability (PWD).

End users must also include in their registration forms their respective SIM cards or respective celfone numbers and their cards’ serial numbers.

The bill requires PTEs to submit to the National Telecommunications Commission (NTC), within thirty (30) days from the date of effectivity of this proposed Act, the verified lists of their current authorized dealers and agents nationwide.

These PTEs are directed under HB 2113 to submit to the NTC every quarter of each year their updated lists of authorized dealers and agents.

Under HB 2113, any information in the SIM card registration shall be treated as absolutely confidential, starting from the point of sale, unless access to information has been granted upon written consent of the subscriber, and that the waiver of absolute confidentiality shall not be made a condition for the approval of subscription agreements.

But the bill requires any PTE to disclose the full name and address contained in a particular SIM card registration, “in case of a duly issued subpoena or order of the court upon finding of probable cause, or upon written request from a law enforcement agency in relation to an ongoing investigation, that a particular number was used in the commission of a crime or that it was used as a means to commit an unlawful act.”

All PTEs are required under HB 2113 to maintain a SIM Card Register of their subscribers containing the bill-required registration information.