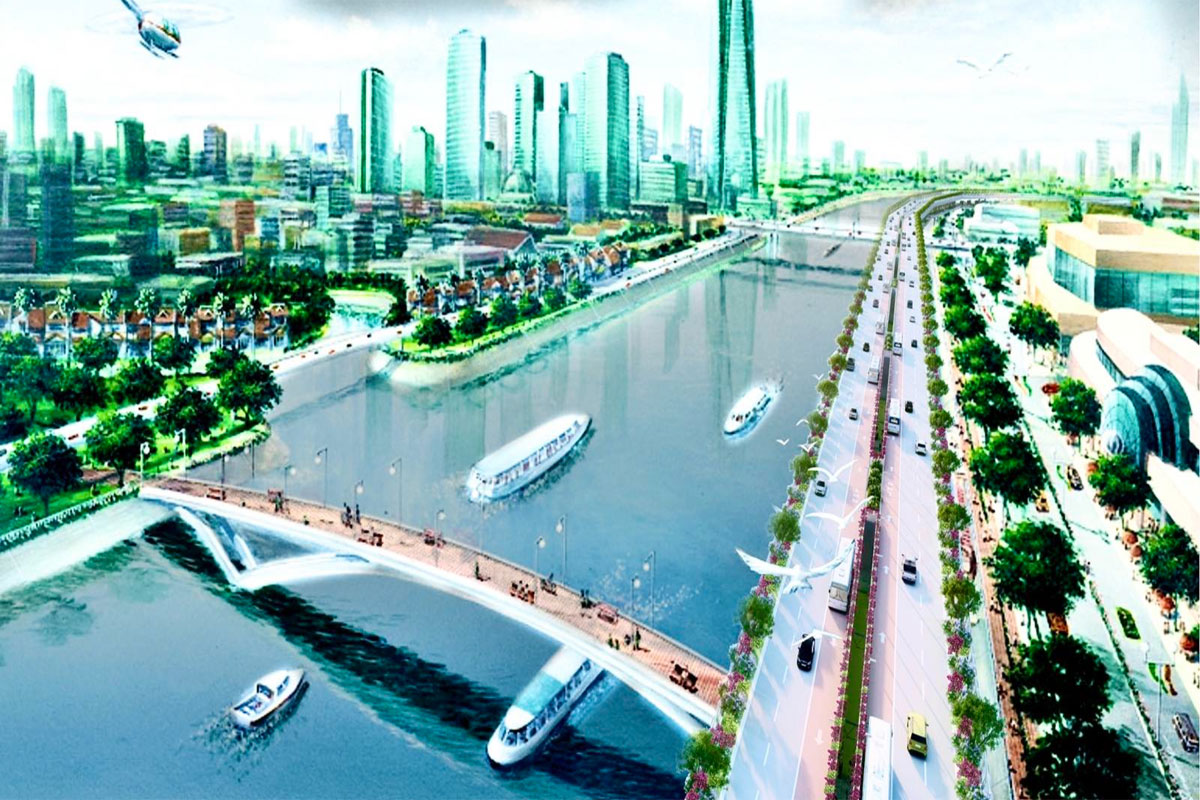 ﻿Design study from Palafox Associates for an elevated expressway along the Pasig River, incorporating dedicated bus lanes and pedestrian and bicycle lanes.
Business,

SAN Miguel Corporation (SMC) has reaffirmed its commitment to build the Pasig River Expressway (PAREX) as a safe, reliable and sustainable infrastructure crucial for an inclusive recovery and growth beyond the pandemic.

SMC President and CEO Ramon S. Ang said that building the 19.37-kilometer road that will link the eastern and western sections of Metro Manila–from Rizal province to the City of Manila–will complement its P2 billion, five-year rehabilitation effort for the historic tributary that already started in July last year to mitigate its impact on the environment.

“In all our major infrastructure projects, we always take into consideration the effects on the environment, putting greater emphasis on how we can build the infrastructure while at the same time preserve or enhance the environment. We engage all stakeholders and in particular, partner with local communities to ensure environmental measures and mitigations are successful for the long-term,” Ang said.

PAREX will be a hybrid infrastructure that can be used by motorists, public transport, cyclists, and pedestrians, to further enhance accessibility and traffic decongestion, while encouraging multiple modes of transportion. Its design will also incorporate green architecture principles.

Ang bared that the country’s top urban planner and green architect, Arch. Felino “Jun” Palafox Jr., through his firm, Palafox Associates, has signed on to help with the sustainable design for the project.

“We share the vision of SMC and Mr. Ramon S. Ang for sustainable infrastructure. For many decades we have been emphasizing green architecture and green urbanism in our projects in the Philippines and abroad. For the PAREX project, our approach will be the same, we are designing not just infrastructure, but an urban landscape. We are promoting sustainability through architecture, with a holistic vision,” said Palafox.

“Mr. Ang already has so many good ideas, including incorporating green modes of transportation. Our job is make sure these ideas–pedestrian pathways, bicycle highways, landscaped planting strip, public transport, are integrated seamlessly into the PAREX,” he added.

“We believe that if done right and in line with sustainability and green architecture principles, the PAREX will be a model road infrastructure that further democratizes the benefits and convenience of infrastructure. These are the types of infrastructure we will need in the future–adaptable to the growing and changing needs of our people,” Ang said.

He also touted plans to put up a Bus Rapid Transit on the PAREX and the existing Skyway system, which will interconnect, completing the north-to-south and east-to-west connection throughout Metro Manila.

This, he said, will enable faster, more reliable, safer, comfortable and affordable commutes for many Filipinos. Ang said that with this, people will spend lesser time spent stand-still traffic, which exacerbates pollution.

Meanwhile, the chief executive reported that its ongoing Pasig River clean-up initiative has also ready yielded some 295,260 metric tons of silt and solid waste since it started middle of last year.

Ang said that the company’s ongoing rehabilitation effort is in response to government’s call for the private sector to help clean major tributaries in line with Manila Bay rehabilitation project that began in 2019.

“The government, led by the Department of Environment and Natural Resources, has done an excellent job in rehabilitating the Pasig River in recent years. We are helping take these efforts to next level, by deepening and widening the river, to enable it to carry more floodwaters, especially during rainy season. Through this, we will reduce incidences of severe flooding that has affected many cities located near the Pasig River,” he added.

Ang emphasized: “Rehabilitating the river does not only involve dredging and removing visible wastes especially plastics that eventually go to the sea. It is only part of the solution. What is needed isa more a holistic approach, which will involve building a sewage system that would prevent it from being the dumping area of industrial and solid wastes.”

“We are committed clean the Pasig River and we are happy that more and more people see its value. In particular, NYK of Japan has joined our efforts and committed $1.2 million worth of equipment and we expect the equipment to arrive by April,” Ang said.

Ang said that as of now, two shallow portions of the river are the primary focus. These are the mouth of river near the Manila Bay, and the area at the Marikina River junction.

“We’re also prioritizing the Marikina River junction as this section acts as sort of. a bottleneck, where water flowing from the Marikina river is restricted , therefore becoming a partial cause of the massive flooding in areas upstream of the Marikina river,” Ang said.

Dredging the Marikina River section can also help reduce the peak water flows that normally go into the Laguna Lake through the Manggahan Floodway, and reduce flooding experienced by many lakeside towns in Rizal and Laguna provinces, Ang said.

Ang added that thus far, SMC has made significant progress in deepening portions of the Pasig River, particularly sections of the river in Pandacan/Sta.Mesa, Paco/San Miguel area. According to hydrographic or depth surveys before and after dredging, sections that only measure two to three meters in depth are now more than five to six meters deep.

“We are confident that in the coming rainy seasons, the increased capacity of the river will reduce flooding in many areas in Pasig, Makati, Mandaluyong, and Manila. And if ever these will be flooding, it can quickly subside in just a few hours,” Ang said.

“This was our experience in the ongoing Tullahan River rehabilitation. To date, our extraction output there has reached 825,142 metric tons and with more personnel and equipment, we expect to hit the one-million mark before or by June this year. According to feedback from local government units, including Valenzuela, flooding has subsided faster than usual in their areas,” said Ang about the P1-billion Tullahan River rehabilitation effort that started in June 2020.