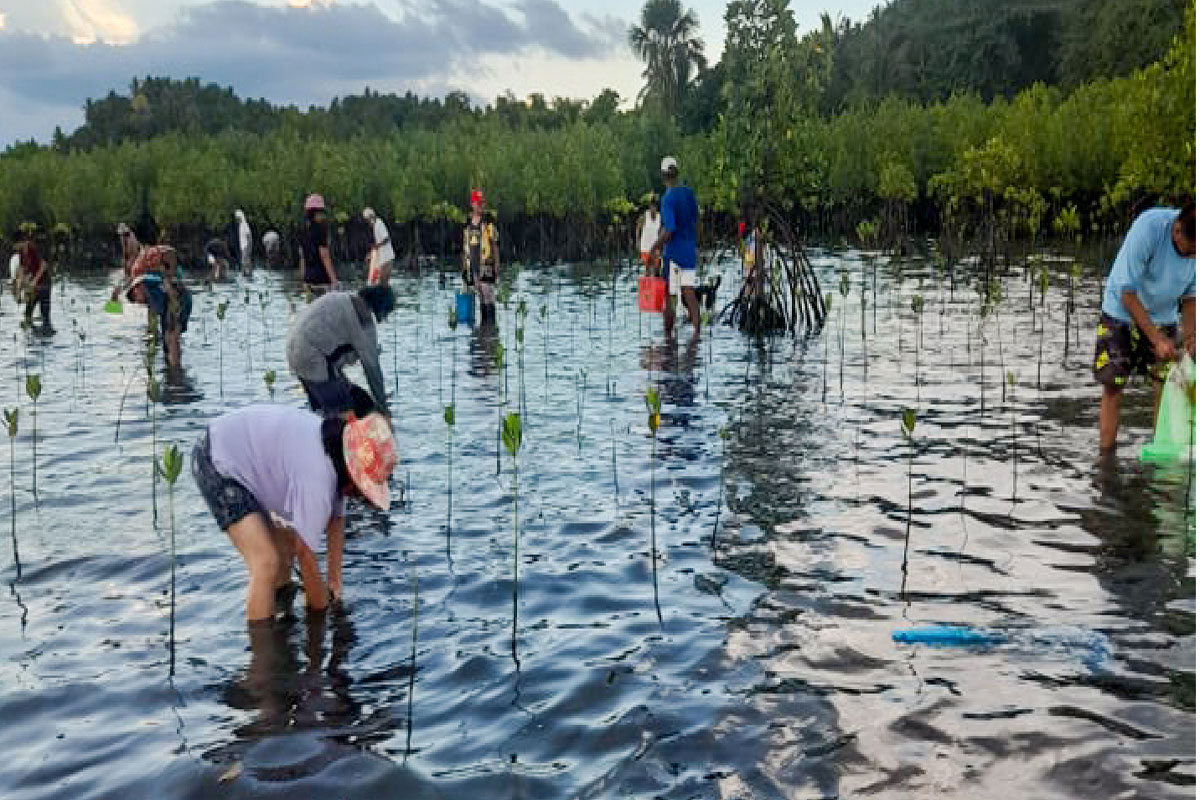 San Miguel Corporation (SMC) has planted over 3.8 million trees in its nationwide upland and mangrove forest rehabilitation program since 2019. Photos show employee and community volunteers during recent tree planting activities in the provinces of Bulacan, Albay, and Quezon.
Business,

SAN Miguel Corporation’s (SMC) group-wide reforestation initiative nationwide has yielded 3.8 million trees since 2019 to date, even as it recently completed planting over 26,000 trees in Angat, Bulacan together with the town’s Dumagat communities.

The initiative is among SMC’s major environmental sustainability projects aimed at helping address the impacts of climate change through the rehabilitation of degraded forests nationwide, carbon capture, and reduction of soil erosion which contributes to severe flooding in lowland areas.

SMC president and CEO Ramon S. Ang said the company, through its power firm SMC Global Power Holdings (SMCGP), has partnered with the indigenous communities of Dumagats in Bulacan to cover the first 16 of 55 hectares targeted for planting with dipterocarp tree species like White and Red Lauan, Palosapis, Apitong, Yakal, Guijo, and other indigenous species such as Bignai and Narra.

The initiative is part of SMCGP’s carbon capture program dubbed Project 747, which aims to plant seven million trees on over 4,000 hectares of land, in seven provinces nationwide.

“We thank the members of the indigenous community in Bulacan, the Dumagats, for helping the company plant 26,656 trees on 16 hectares in just two weeks last December. Being residents in the area, their local knowledge and insights are very valuable to our program, from the choice of the ideal tree species, to identifying the upland areas where these trees should be planted to ensure their growth to adulthood,” Ang said.

While SMCGP accounts for majority of trees and mangroves planted since 2019, other SMC businesses have either ongoing, long-term reforestation activities, or have begun their own initiatives.

With the December planting in Angat, Bulacan included, SMC and community volunteers have planted a total 54,056 trees and mangroves to date in Bulacan since 2019. The reforestation effort complements SMC’s flood mitigation strategy in the province, which will include a river channel improvement program for the Marilao-Meycauayan-Obando River System (MMORS) as well as other active rivers and tributaries in Bulacan.

This total includes 6,400 trees, including 3,200 narra and guyabano tree varieties planted by employees of SMC’s Bulacan Bulk Water Supply unit over 14 hectares at the Angat Dam Watershed since 2019. This project was conducted in cooperation with the Metropolitan Waterworks and Sewerage System (MWSS).

Dubbed the annual Million Tree Planting Challenge, MWSS partners with organizations to reforest or replenish the forest cover of 126 hectares of the Angat Dam Watershed within three years.

Earlier last year, SMC employee volunteers planted a total of 8,000 mangrove saplings at the Bulakan Mangrove Ecopark, which the company jointly maintains with the local government of Bulakan town. A total of 13,000 mangroves are also being grown at the coastal areas of Hagonoy and Obando towns.

SMC is also looking to develop the first 20 hectares of its 80-hectare San Miguel-Paombong Mangrove Plantation and Sanctuary project at Barangay Masukol in the town of Paombong, which can host as many as 200,000 mangroves.

“We are taking a holistic approach in our environmental programs and this both entails the reforestation and establishment of mangrove and upland areas. By rehabilitating these upland areas, we can help mitigate soil erosion that contributes to heavy sedimentation or siltation of tributaries which, together with solid waste pollution, result in flooding. At the same time, nurturing mangrove areas will protect coastal areas from storm surges and flooding,” Ang said.

SMC’s group-wide reforestation project targets to plant endemic trees and fruit tree species that are recommended by the Department of Environment and Natural Resources (DENR) and local communities with vast knowledge of their areas.

Out of SMC’s total of 3,802,898 trees and mangroves planted to date, SMC Global Power’s Project 747 accounts for 3,747,898, planted on 1,110 hectares with the help of 39 people’s organizations in Zambales, Davao Occidental, Negros Occidental, Bataan, Pangasinan, Albay, Quezon province, and Bulacan.

With the help of these local community organizations, the Project 747 initiative has yielded a survival rate of 89% for upland trees and 91% for mangrove saplings.

Under its Trees Brew Life Program, San Miguel Brewery employees planted 22,600 mangroves and trees in Mandaue, Cebu, and 1,500 trees in Bacolod and Tagoloan cities in 2021. SMB’s Trees Brew Life has planted an estimated one million trees in various locations nationwide over the last 10 years.

Employee volunteers from Ginebra San Miguel Inc. and community stakeholders are taking care of 40,000 full-grown trees across 12 hectares of land and will also undertake a two-hectare expansion at the same site in Bago City, Negros Occidental.

Petron Corporation also eyes to plant at least 50,000 seedlings as part of its proposed 10-year biodiversity conservation efforts for the Sarangani Bay Protected Seascape. Since 2000, Petron has planted over 1 million trees and mangroves nationwide and has also adopted a total of 30 hectares of mangrove reforestation areas in Tacloban City, Leyte, Roxas City, Capiz under its “Puno ng Buhay” program.

Petron also received approval to reforest one hectare each in Bawing, General Santos City and Tagoloan, Misamis Oriental. Approximately 2,500 new mangrove propagules will be planted in Bawing, while bamboo and other seedlings will be used for Tagoloan reforestation.