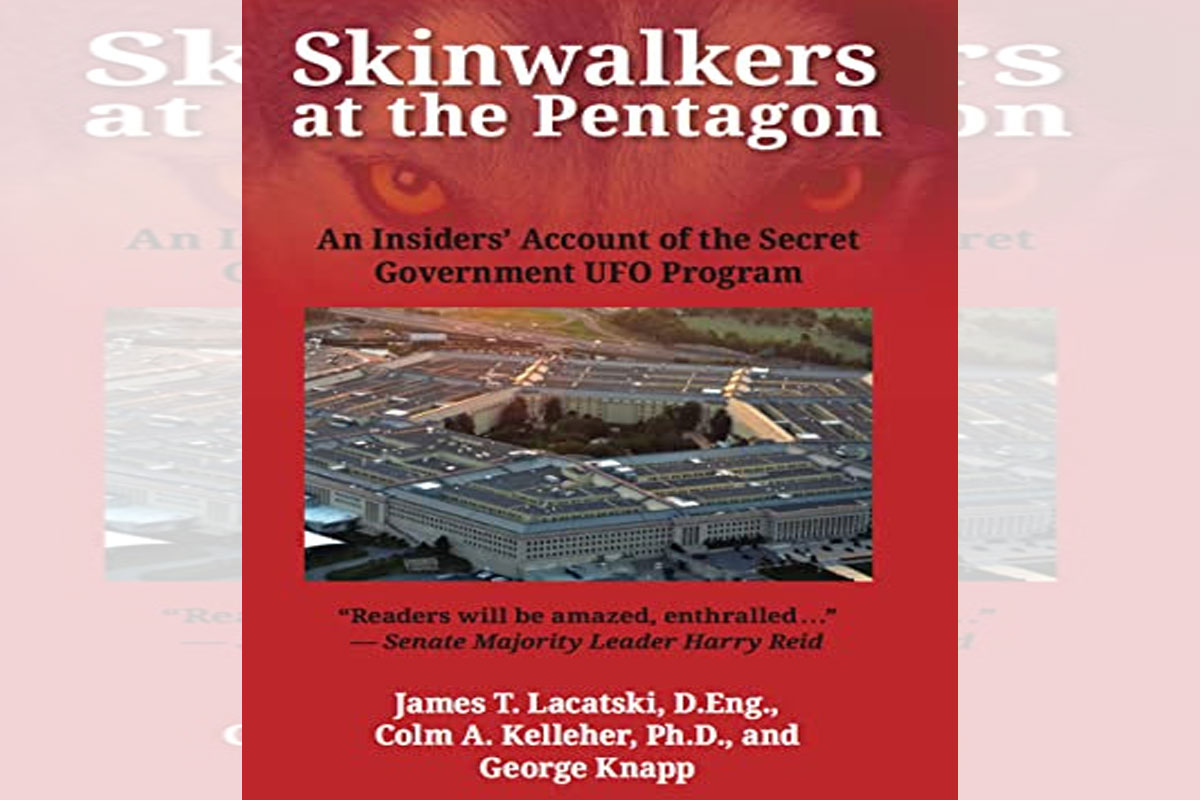 Skinwalkers in the Pentagon: Strange and Very Sinister

You may have seen the new book from James T. Lacatski D. Eng., Colm A Kelleher Ph.D., and, George Knapp. Its title: Skinwalkers at the Pentagon: An Insiders’ Account of the Secret Government UFO Program. The description for this independently published book reads as follows: “Skinwalkers at the Pentagon unmasks the massive scope of the Pentagon’s landmark UFO study that ran from the Defense Intelligence Agency in Washington, D.C. The Advanced Aerospace Weapon System Applications Program, or AAWSAP investigated the ‘Tic Tac’ and other ‘nuts and bolts’ UFO events, analyzed intrusions of UFOs onto US military bases, as well as probed the plethora of bizarre phenomena that government investigators encountered on Skinwalker Ranch. Written by two program insiders and a respected journalist, Skinwalkers at the Pentagon comes to a conclusion that has never before been revealed! Encountering UFOs often led to the ‘attachment’ of strange phenomena to military personnel who visited the Ranch and brought ‘something’ home to their families, resulting in frightening eruptions of paranormal events in their households that terrorized and sometimes injured their children. By the end of the two-year program, more than 100 separate technical reports, some of which ran to hundreds of pages, were delivered to the Defense Intelligence Agency. Among them was a 149-page report on the Soviet (and now Russian) UAP investigation/analysis capability. Another details the design and build of a functional prototype for an autonomous Unidentified Aerial Phenomena surveillance platform.”

There’s no doubt that’s a wild body of material. I’ll be reviewing Skinwalkers at the Pentagon very soon. So, I thought that while, right now, there’s a deep interest in this creepy phenomenon – not to forget the government connections to the phenomenon – I would share with you the background on this undeniably dangerous beast. In the Middle Ages, the most feared of all the many and varied shapeshifters was the werewolf, and particularly so throughout much of Europe. Today, however, a very good, solid case can be made that the Skinwalker is one of the most dangerous transformer of all. It is a creature that dominates the culture and the folklore of certain Native Americans – and to the extent that some will not even utter its name, for fear of it creating a backlash against the person who dared to speak the deadly S–word. But what, exactly, are these things that instill such fear in countless numbers of people? Let us take a look. The answers are many, but you might not be happy with what you are about to learn. 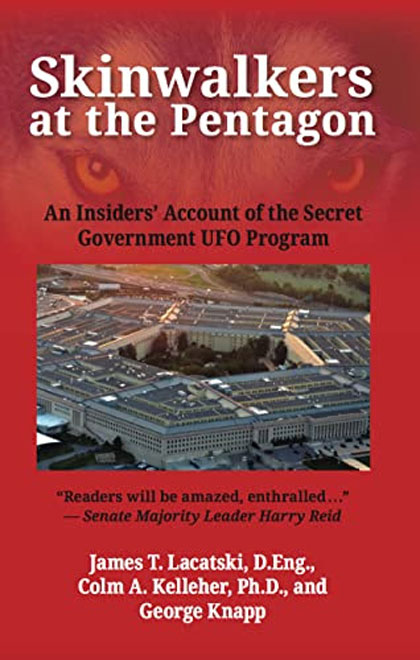 For certain Native American people, the Skinwalker – tales of which date back centuries – is a definitive witch, a crone-like thing that has the ability to change its form, and radically so, too. And it is not just one specific type of beast into which the witch can change, but multiple ones. While a shapeshifting Native American witch can take on, quite literally, hundreds of forms, the most often reported guises are bears, coyotes, various types of birds, and – at the top of the list – wolves or wolf-like animals. This latter issue, of course, emphasizes that the Skinwalker is not that dissimilar at all to the traditional European werewolf, despite being separated by distances of thousands of miles. There can be no doubt that, in recent times, at least, interest in the Skinwalker mystery soared in 2005. That was when Colm A. Kelleher and George Knapp penned their best-selling book, Hunt for the Skinwalker. It was a book which detailed strange and terrifying activity on a remote ranch in Utah – activity which suggested manipulative Skinwalkers had descended on the ranch and who quickly began wreaking havoc – maybe, simply, because they could. As well as experiencing countless UFO encounters, and sightings of large and hairy Bigfoot-type beasts, the family also had confrontations with a huge, malevolent wolf; a monster-size animal upon which bullets had absolutely no effect at all. As George Knapp noted in Hunt for the Skinwalker, with regard to the many and varied phenomena that caused chaos and mayhem on the ranch: “…reality isn’t what it used to be.” For the Native Americans, however, reality hasn’t been what it appears to be for a very long time. 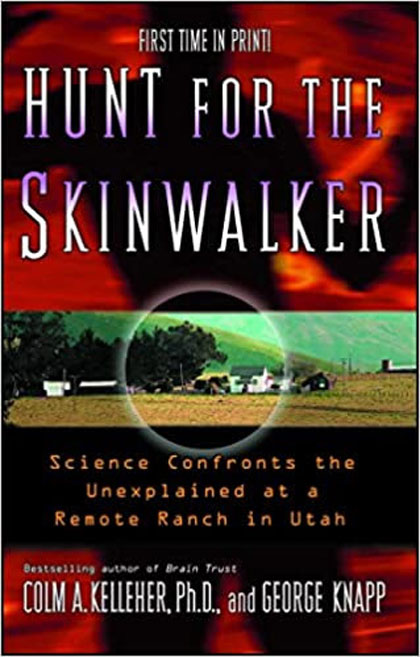 The process by which a witch can become a Skinwalker is a highly complex one, and one which involves several different processes. For example, witches who are both learned and skilled in magical arts can transform themselves into a wide variety of creatures, and all by focusing on its image in their minds – very often in the confines of their teepee. In most cases, however, a witch will secure the hide of the animal they wish to become and wrap it around their shoulders and back. By effectively wearing the hide, the witch – slowly and step by step – becomes the very beast it specifically seeks to emulate. And, so Native American teachings maintain, that includes adopting its keen senses of smell and sight, its agility and speed, and even its complete, physical form. Perhaps the most sinister aspect of the Skinwalker is that it has the ability to supernaturally infect people with deadly diseases and life-threatening illnesses. Strangely, on more than a few occasions, those who have found themselves in the direct, close presence of a Skinwalker have –in mere days – succumbed to very rare medical conditions. Precisely how the Skinwalker can perform such a hostile thing remains unknown. It is, however, worth noting that the Skinwalker is said to have an expert knowledge of medicine, both ancient and modern. No wonder Native Americans avoid them at all costs. And it is not just people who can fall victim to this dangerous beast. Animals – very often, farm animals – have also become the targets of these multi-formed creatures.

For example, cattle-mutilations, that reached their peak in the 1970s – but which are still occasionally reported to this very day – are believed by some, certain Native Americans to be the work of crazed Skinwalkers. The approach of the creatures is to remove organs and blood from cattle, specifically to use it in yet further rites and rituals designed to enhance its paranormal powers to even greater degrees. This may not be quite as strange, or as unlikely, as it might seem: between 1975 and 1978, police officers investigating dozens of cattle mutilation events in New Mexico, Utah, Colorado, and Arizona found that many such attacks had specifically occurred on Native American reservations – something which is most assuredly food for thought. Of course, there is one critical issue we have yet to touch upon: namely, why would anyone even want to become a Skinwalker in the first place? The answer, as you may have already deduced, is not a good one. Adopting the guise of an animal can, quite literally, allow a person to get away with murder. After all, if the target of the Skinwalker is violently slaughtered by a rampaging bear or a savage wolf, who would even – or ever – dream of the possibility that the beast was actually a transformed human? Almost certainly not many, to be sure!

As for why the Skinwalker issue is steeped in so much mystery – despite it being the subject of a bestselling book – it is chiefly because Native Americans fear that if they speak openly on the matter, it may well lead those same Skinwalkers to target them. I found this out for myself, to a graphic level, in August of 2010. I was out in the Californian desert, specifically in Joshua Tree, where a spate of very savage attacks on animals occurred, amid claims that a shapeshifting Skinwalker was the culprit. Vital organs were removed from the animals, as was blood, in massive amounts. My reason for being there was no coincidence: I had been hired by the VH1 channel to be filmed for a documentary on the phenomenon for the now-long-defunct show, Real and Chance: The Legend Hunters. On the second day of shooting, the film crew and I headed out to a local animal sanctuary – a place that specialized in caring for, and rehabilitating, wolves. I quickly learned just how much the Skinwalker phenomenon was feared in and around Joshua Tree. And, in all likelihood, it still is. I also saw for myself a deep reluctance on the part of the staff of the sanctuary to ever utter that dreaded word. By now, you know the word I mean.

The Bizarre Case of the Blue Phantom of Louisville