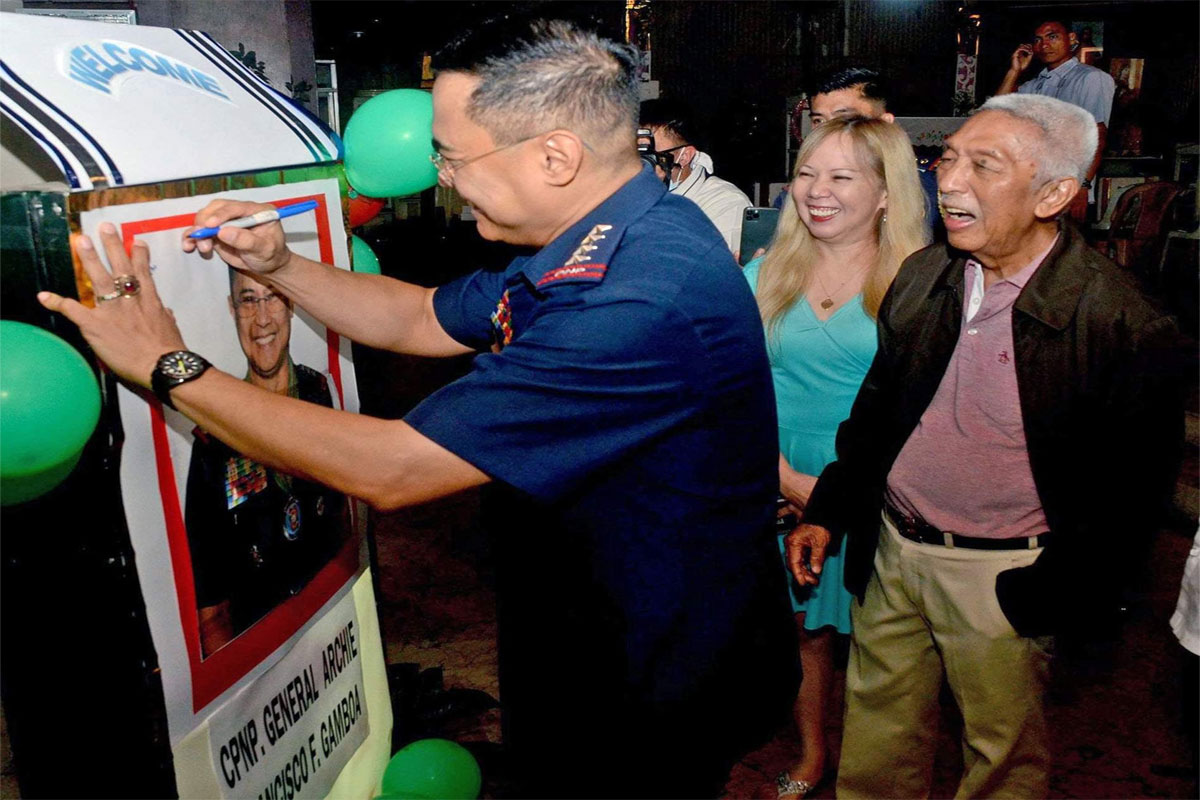 THE Philippine National Police (PNP) really lost a ‘Big Brother’ in the person of the late Journal Group publisher and editor-in-chief, Augusto ‘Gus’ B. Villanueva who passed away at the age of 83 just a week ago.

Describing him as the PNP’s Big Brother’ would be an understatement as the known Doyen of Philippine sportswriters and a pillar in Philippine Journalism actually made it a point to come to the full defense of police officers and men who are being pilloried in the performance of their duties while going all-out against rogues in uniform.

I’m a living witness to that since Sir Gus was the one who brought up the idea of having a daily corner at the People’s Journal and People’s Tonight which will play up the good side of the police force. “The article should be aptly called ‘Mamang Pulis,” he told me in 2007.

Sir Gus and I actually conceptualized the highly-successful ‘Mamang Pulis’ series in People’s Journal and People’s Tonight in 2007. He would also not hesitate to publish hundreds, if not thousands of my articles in defense of police officers and men who have been wronged, charged with harassment suits and maligned by others in the performance of their job. However, he is also at the vanguard of fighting corruption in the force and the government and won’t make any move to prevent the publication of stories about misfits and scalawags in the 225,000-strong police force since 2005.

Last December, the series marked its 14th anniversary with the PNP leadership once again citing its invaluable role in the more than 225,000-strong organization’s massive and continuing reform program and campaign against illegal drugs, corruption and terrorism despite the tremendous odds and challenges they are facing amid the new normal.

The late journalism icon in 2007 told me he wanted the Journal Group to consistently promote the popular advocacies of the organization and daily bring timely, factual and credible news to bring the Philippine brand of law enforcement and police service to a higher level.

Thus, the birth of the ‘Mamang Pulis’ series in the Journal Group newspapers. It was one hot summer in 2007 when then PNP chief, General Avelino I. Razon Jr. paid a courtesy call on Sir Gus and other Journal Group editors led by Manuel Ces and Ma. Teresa Lardizabal.

During our lunch meeting in our former Makati City office, Sir Gus came up with the idea of having a regular Journal Group series about the police force to help its vision of becoming a really highly professional and capable police force truly worthy of the trust and respect of the people.

“As Sir Gus told me then, Gen. Razon became the Chief, PNP at a time when the ordinary Filipino feared the cop rather than adored him, when the man on the street considered it safer distancing himself from the cop rather than running to him when in trouble. Thus, the need to have a daily corner about the force.”

We did not encounter any problem in having a title for the series. Gen. Razon was then known for his ‘Mamang Pulis’ program. Thus, the ‘Mamang Pulis’ series.

Over the past 14 years, the Monday to Friday ‘Mamang Pulis’ corner in People’s Journal and People’s Tonight has been an invaluable partner of the PNP in the campaign against all forms of criminality specifically illegal drug trafficking and abuse and corruption apart from being an advocate of its massive transformation program under its P.A.T.R.O.L. Plan 2030 aimed at transforming the PNP into a more credible, effective and efficient police organization.

PNP chief, General Dionardo B. Carlos, himself a former PNP spokesperson and chief of the PNP Public Information Office has cited the PJI’s ‘Mamang Pulis’ series as a vital cog in its public awareness program particularly when it comes to attracting the public trust and support thru its reform program which is now being felt by the public despite continuing criticisms against the organization.

Many have been devastated by the sudden demise of Sir Gus, the Grand Old Man of Philippine journalism, his countless friends from the police force among them. Yes, Sir Gus was well-loved by the police force and was really the one who brought fame and honor anew to our old office in Manila.

Since he rejoined the Journal Group in 2005, almost all PNP chiefs have made it a habit to visit the Journal Group office and pay a courtesy call on him starting from former PNP chief, Gen. Arturo C. Lomibao up to now senatorial candidate, Gen. Guillermo Lorenzo T. Eleazar.

It was I who promised Sir after Gen. Lomibao visited our office in Port Area, Manila in 2005 that henceforth, I will make sure that every new PNP chief will make it a point that he will first visit the Journal Office and meet him personally.

It was really our pride and honor to be the first to be visited by a new PNP chief among the dozens of newspapers, radio and television stations in the country. The PNP chiefs enjoyed a ‘rock star’ treatment during their visit, all of them mobbed by Journal Group employees and other walk-in fans wanting to have their pictures taken with them.

Gen. Carlos and I were also planning to meet Sir Gus in his office this month until the sad news came.

Actually, Gen. Carlos is not a stranger to the Boss, having meet him in our office during the time of Gen. Purisima and de la Rosa.

Many PNP spokespersons actually became good friends of Sir Gus. Four of them became PNP chiefs in the person of Generals Lomibao, Bartolome, Espina and Carlos.

During his stint as National Capital Region Police Office chief, Gen. Espina even made it a point to pay a surprise visit to Boss even without me.

To remove stress, Gen. Espina would often tell me that he would sometimes stay in the small room of Sir Gus and have coffee or tea before leaving.

When he was already the Chief, PNP, I already scheduled Gen. Albayalde’s visit to our office. But days before his appointment, I got a call from the Old Man asking me who is in his office? When I can’t find an answer, he gave the phone to the man who turned out to be Gen. Albayalde.

During his official visit, Gen. Albayalde was surprised to see that then NCRPO chief, Gen. Eleazar and the five NCRPO District Directors were already having coffee inside the Boss’ office. It was like the NCRPO chief having a command conference with his DDs inside our office.

After learning of the death of Sir Gus, Gen. Gamboa sent me a photo of a framed People’s Journal and People’s Tonight clippings about him which he received from the latter during his visit to the PJI office.

“This frame is dominantly placed in one of the walls of my museum in Bukidnon,” the lawyer-member of PMA ‘Sinagtala’ Class of 1986 told me.

Sir Gus has been a friend to the police force, countless police generals, colonels and the non-commissioned officers since his younger days. His best friend is the late Manila City Mayor, retired Gen. Alfredo ‘Fred’ Lim’ whom I happened to meet during his past birthday celebrations in Manila Hotel. Mayor Lim is no stranger to me since I used to cover him when he was still the Western Police District director and later chief of the National Bureau of Investigation.

Many former police aides have told me that their bosses would require them to have a copy of People’s Journal and People’s Tonight on their tables early in the morning since they want to read something about them courtesy of Sir Gus. They include the late Fred Lim and Department of Interior and Local Government Secretary Bobby Barbers who also used to be a Manila police official like Lim. Sec. Barbers and I used to play good basketball during our old WPD days.

Sir Gus also possessed the ability to assemble top officials in one place. I remember a time when I contacted past and present PNP spokespersons for a meeting with Sir Gus in our former Makati City office. On that day, Generals Bartolome, Leopoldo N. Bataoil who is now the mayor of Lingayen, Pangasinan, Samuel D. Pagdilao, Espina and Agrimero A. Cruz Jr. all came ahead of our scheduled meeting and stayed with us for hours.

Pagdilao, a lawyer from PMA Class 1979 texted me these words after he learned of Sir’ Gus’ death.: “Im sorry to hear the passing of a media stalwart. He was indeed a true friend of PNP and i have a lot of respect for him! May God rest his soul and give comfort to the bereaved family!!-

Another good friend of Sir Gus, former NCRPO chief and PNP Deputy Chief for Administration, retired Gen. Geary L. Barias said he will terribly miss the kindness and wisdom of our late publisher and editor-in-chief.