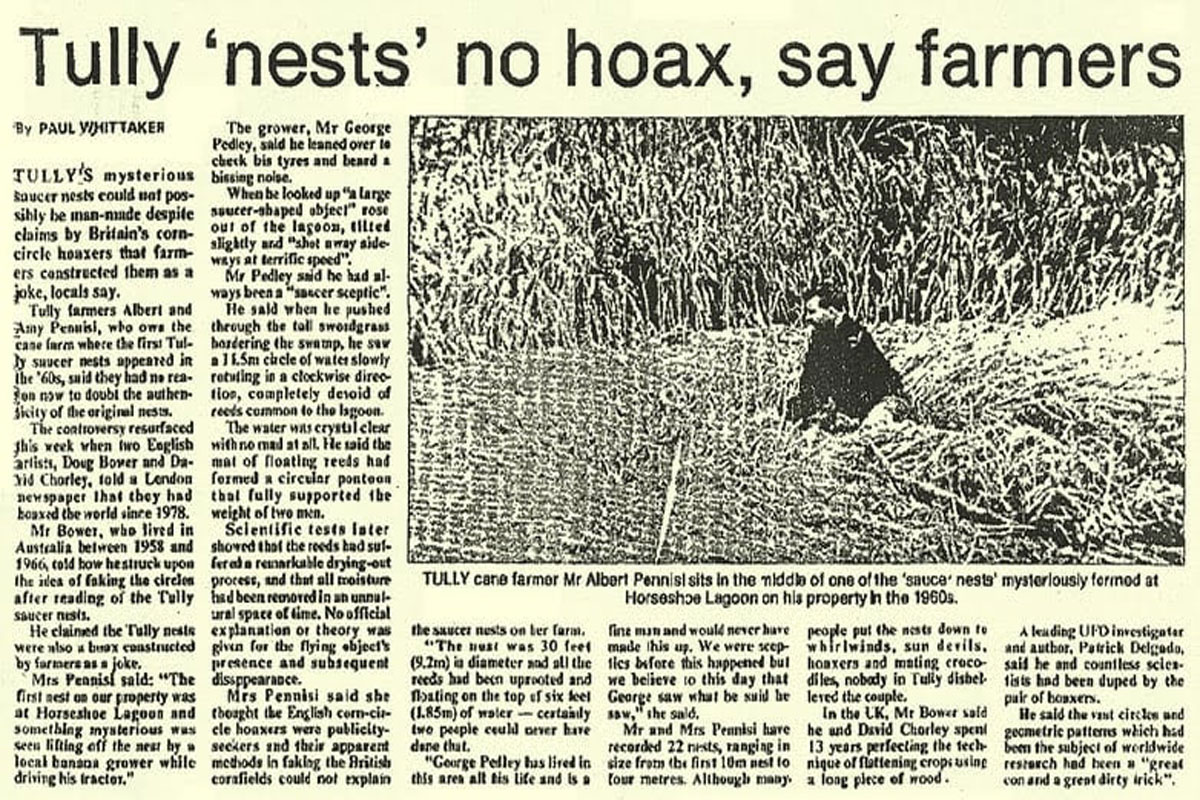 Saucer serial hysteria: The case of the Tully crop circle 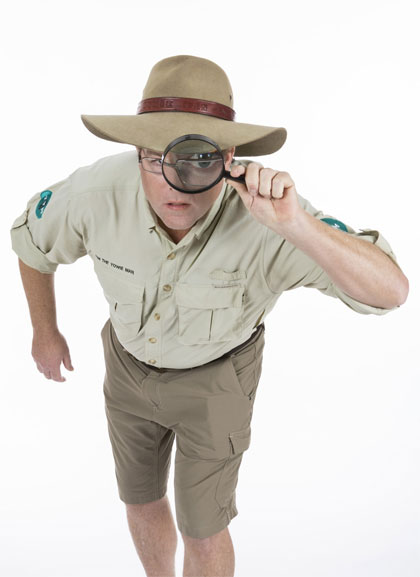 Naturalist, author, broadcaster and tour guide Tim the Yowie Man has dedicated the past 25 years to documenting Australia’s unusual natural phenomena. He’s the author of several books, including Haunted and Mysterious Australia (New Holland, 2018). Follow him on Facebook and Twitter: @TimYowie 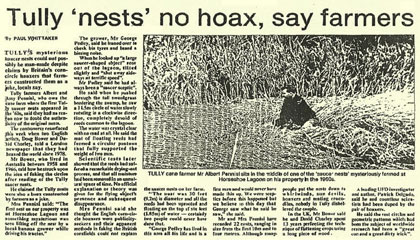 Newspaper coverage at the time.

The Tully saucer nest heralded the start of the worldwide phenomenon of the modern crop circle.

ON A FOGGY morning in January 1966, George Pedley, a banana farmer from Euramo, near Tully in far north Queensland, was driving his tractor past a lagoon on his property when he suddenly heard “a loud ear-piercing hissing above the noise of the engine”. Thinking he’d sustained a puncture, George immediately stopped to check the tractor’s tyres. But before he’d had a chance to even step down from the cabin, “a flying saucer rose at great speed from near the lagoon”.

“My body was frigid with fright,” the flustered farmer told reporters soon after his encounter. After the so-called saucer vanished “in a puff of blue vapour”, George cautiously went to investigate.

What he found changed his life forever. Unlike the vast majority of UFO reports, where there is little, if any, tangible evidence, this unidentified aircraft had, according to George, left a nest-like mark, 9m in diameter, in the lagoon’s floating reeds. Furthermore, many of the reeds were fused together, presumably by the heat of the engine, and continued to “swirl for some time in a clockwise direction”.

Looking for logical explanations, meteorologists suggested the “saucer nest” may have been created by a whirlwind of sorts, but, when a lack of other evidence failed to confirm this theory, Tully made international headlines.

Had aliens left a message for humanity in a far-flung Queensland lagoon?

The Tully saucer nest heralded the start of the worldwide phenomenon of the modern crop circle, with reports in subsequent years as far afield as the USA, Japan and, most commonly, southern England. However, what began as simple circles in bulrushes soon morphed into intricate patterns mysteriously appearing in a wide range of crops, with many charlatans continuing to peddle the alien theory.

That was until 1991, when the pseudoscience of cereology (yes, that’s the study of crop circles!) was turned on its head by two artists, Doug Bower and Dave Chorley, who confessed that, inspired by the 1966 Tully nests, they had faked hundreds of crop circles.

Despite this revelation, some dedicated cereologists continue to claim a significant percentage of crop circles are footprints of extraterrestrial activity. As to why intelligent life would travel millions of kilometres from a faraway galaxy, weave odd patterns in remote fields and disappear without a trace is anyone’s guess.

So if the Tully circles weren’t the result of a rare weather event, such as a mini-tornado, what caused them? Some have speculated they could have been due to unusual animal behaviour. In 2012 crop circles in a Tasmanian opium field turned out to be the result of disorientated Bennett’s wallabies wandering in circles after eating poppies. Whatever the reason, I think we can be pretty confident they weren’t the handiwork of little green men.

If you’ve seen a whirlwind, or willy-willy, flatten part of a crop, I’d love to hear from you, especially if you have video or photos.