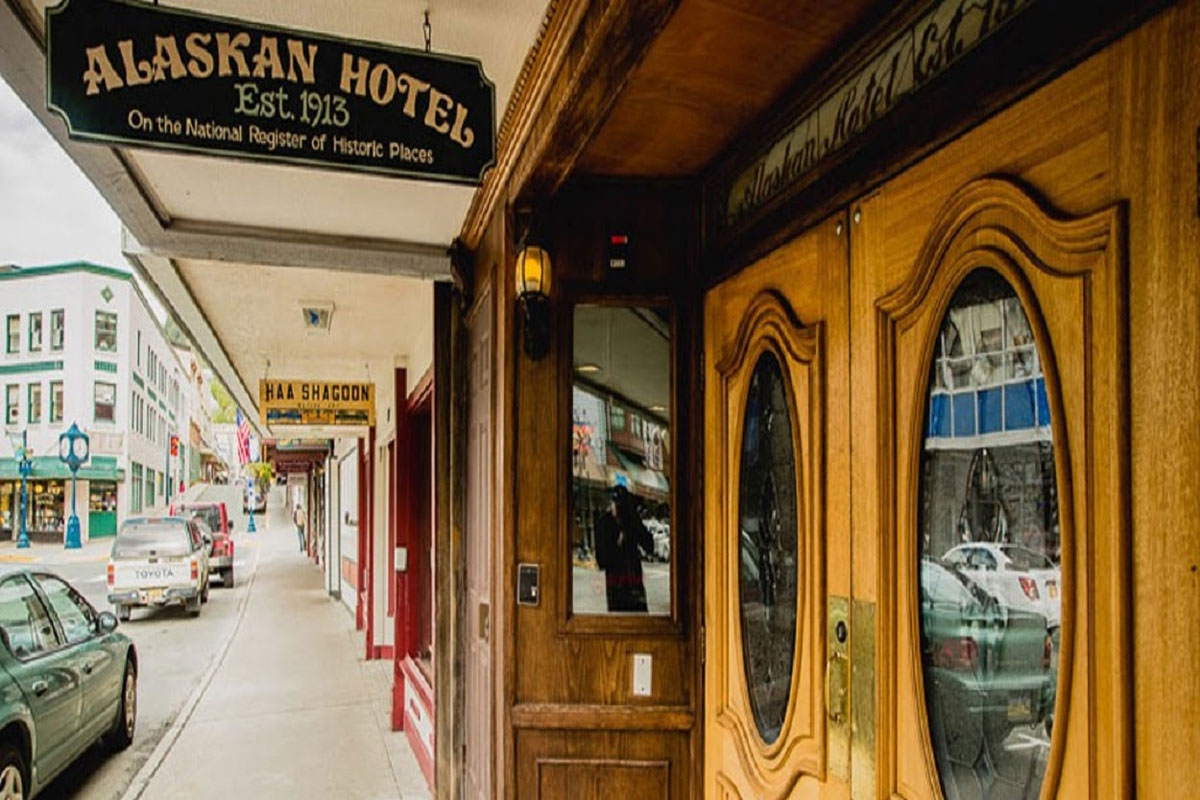 Room 315 And The Brutal Hauntings Of The Alaskan Hotel

Perhaps what makes the accounts of bizarre and harrowing hauntings at the Alaskan Hotel is that it resides within the boundaries of one of the most intriguing places in the United States – the Alaskan Triangle. Indeed, all manner of paranormal encounters take place with thin this section of Alaska, ranging from strange Bigfoot-like creatures to UFOs, and, of course, demonic entities and displaced souls. 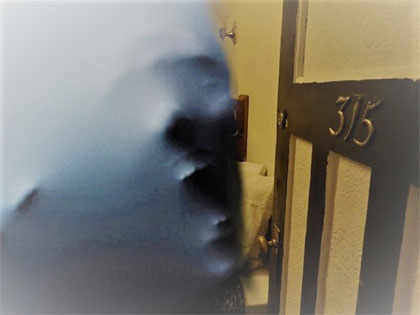 Whether the activity at the Alaskan Hotel is down to its location or not is uncertain. However, the activity witnessed and reported there puts the hotel high on the list of paranormally active locations. With sightings of dark shadowy figures to people even being prodded and pushed by unseen hands, to objects moving and doors opening of their own accord, the entire building is seemingly wired up to another realm of existence that allows those who reside on the other side of the great beyond access to our world.

There are also reports of encounters that we could only describe as time slips, which adds yet another layer to this intriguing and mysterious location. Indeed, as we will examine a little later, the surrounding location may be as important as the buildings and the tales tied to it. Before we move on to those contemplations, though, we will turn our attention fully to the Alaskan Hotel, and the many strange encounters that have taken place there.

Many Strange Happenings From The Basement To The Bar

The infamous Alaskan Hotel in Juneau, Alaska, dates back to 1913 when brothers James and John McCloskey, along with Jules Caro, opened the hotel following them striking it lucky in the Klondike Gold Rush (or the Yukon Gold Rush). [1] The hotel offered 46 rooms over three floors and quickly became the center point of an ever-growing community of people who had flocked to the region in search of their fortune.

According to an online article in 2019, the current owners of the hotel are Mike and Bettye Adams, who have owned the building for 40 years. During that time, they have witnessed a plethora of paranormal incidents. They claim that strange goings-on occur all over the hotel, from the bar to the basement and to various rooms. What’s more, not only have the Adams witnessed the bizarre activity themselves but many of the hotel’s staff and guests have also done so.

The entrance to the Alaskan Hotel

One of the rooms – Room 315, which we will examine in more detail shortly – appears to be the most active part of the hotel. It is seemingly not uncommon for those who have requested to stay there to change their minds in the middle of the night. Many report a feeling of despair and ill intent permeating their bodies.

Even more bizarre, are the several reports from guests claiming that the modern bathroom of the room would morph into a typical Victorian-era bathroom for several seconds before morphing back to the modern appearance. This would perhaps suggest as much as a haunting at the Alaskan Hotel, there is some kind of timeslip encounters taking place. Once more, we will return to this idea later.

There is, though, one apparent entity that appears more than many.

One of the most famous spirits said to reside at the Alaskan Hotel is Alice, who legend says was murdered in Room 219. Alice had arrived at the hotel with her husband who, like many, was determined to find his fortune in the gold rush. However, after he didn’t return to his wife after several weeks, and with no money left to buy food or pay for the room, Alice turned to prostitution in order to support herself.

It was while she was with a client in the room when her husband returned. Some retellings of the account state that he allowed the man to walk out of the room, while others state he immediately withdrew his pistol and shot him dead. Regardless of the truth of the matter, he then turned his attention to Alice and strangled her to death.

It is said that her spirit remains, not only in Room 219 but in other rooms around the hotel, such as 218 and 319. Hotel staff would often walk into the room to discover towels taken from the shelves and thrown around the room, as well as other various items moved from one location to another.

Even more amazing, many guests who have stayed in these rooms often request to be moved in the middle of the night, with some even fleeing the hotel completely, unable or unwilling to contemplate the entities they have witnessed. 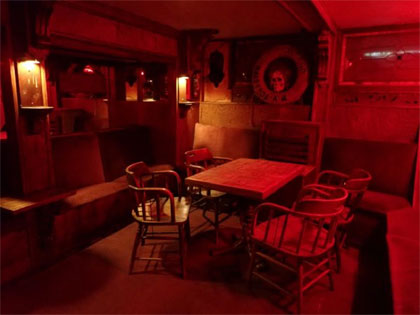 The bar of the Alaskan Hotel

According to one hotel employee, Alice is often seen sitting on one of the beds in room 219 (and sometimes in 218), while some staff members even report being pushed or touched by her. Other accounts speak of employees walking up the stairs leading to the room and of seeing Alice briefly in the large mirror in the hallway. [2]

There have been further sightings of Alice in the hotel bar, as well as people who have reported seeing her walk down the stairs and disappear.

As well as the physical sightings of Alice, many people report items being moved in the room or even going missing entirely. Even more ominous is an almost palpable feeling of dread that some people report when entering the room. This is often accompanied by a sudden feeling of dizziness and intense sickness.

There is a book that the owners keep at the hotel. In it, guests are welcomed the document their encounters, with Alice or other ghostly entities, which many have done. A good portion of those occur in Room 315, where we will turn out attention next.

The Bone-Chilling Incidents Of Room 315

One of the most intriguing and unnerving parts of the hotel is Room 315, which Bettye describes is “just creepy” during a 2018 interview with Alaska Public Media. [3]

Room 315 is certainly unremarkable enough – two single beds, a painting of two women from the 1900s on the wall, a single window, and a replica antique telephone on the wall. As journalist Jacob Resneck wrote, “there aren’t many clues that you’re still in the 21st century”.

One particularly unsettling encounter occurred in May 2007, when a United States sailor from the USS Bunker Hill emailed the hotel saying he like to stay in Room 315 while the ship was in port.

The owners agreed to his request. What followed was bordering on the unbelievable.

Shortly before midnight, Juneau police received a call regarding a “complaint” at the hotel. When they arrived, they immediately noticed several people beckoning them toward them and upstairs.

They quickly found themselves outside Room 315. The door was locked and there was no response from inside. When they finally did break the door down, the scene that met them was one of sheer carnage. 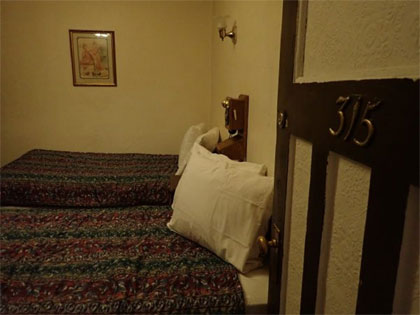 One of the police officers who entered the room was Officer Chris Gifford. He would recall that “the walls were covered in blood” and that it “looked like something very bad had happened” in the room. By this point, it appeared the sailor had jumped from the single window in the room. When they looked down to the street, to their amazement, the sailor was struggling to his feet. Although he was suffering from “injuries all over his body”, he survived the ordeal.

Other guests in the hotel recall hearing the sailor’s descent from the hotel window. One was an Americorps volunteer named Jill Weitz. She recalled hearing a sudden yelling, but as there was a band playing in the bar downstairs, she assumed it was connected to that. Then, she heard the sound of glass shattering, and only moments later, their hotel window simply shattered.

The following morning, Navy officers arrived at the hotel to undertake their own investigations. According to Adams, they made it clear they wanted no publicity regarding the incident involving one of their personnel. What’s more, despite the police being involved there was no coverage of the incident in the newspapers or other media platforms.

Even stranger, the owners would receive a phone call from a woman claiming to be the sailor’s mother. She was extremely angry and accused the owners of “almost killing her son” by allowing him to stay in a room that was they knew was haunted.

Just what the sailor saw in the room and why he decided to leap from the window, only narrowly avoiding death remains unknown.

Woman gets 3D printed ear transplant made of her own cells

What are some ancient mysteries and how were they solved?
September 28, 2022 People's Tonight
SHOW ALL