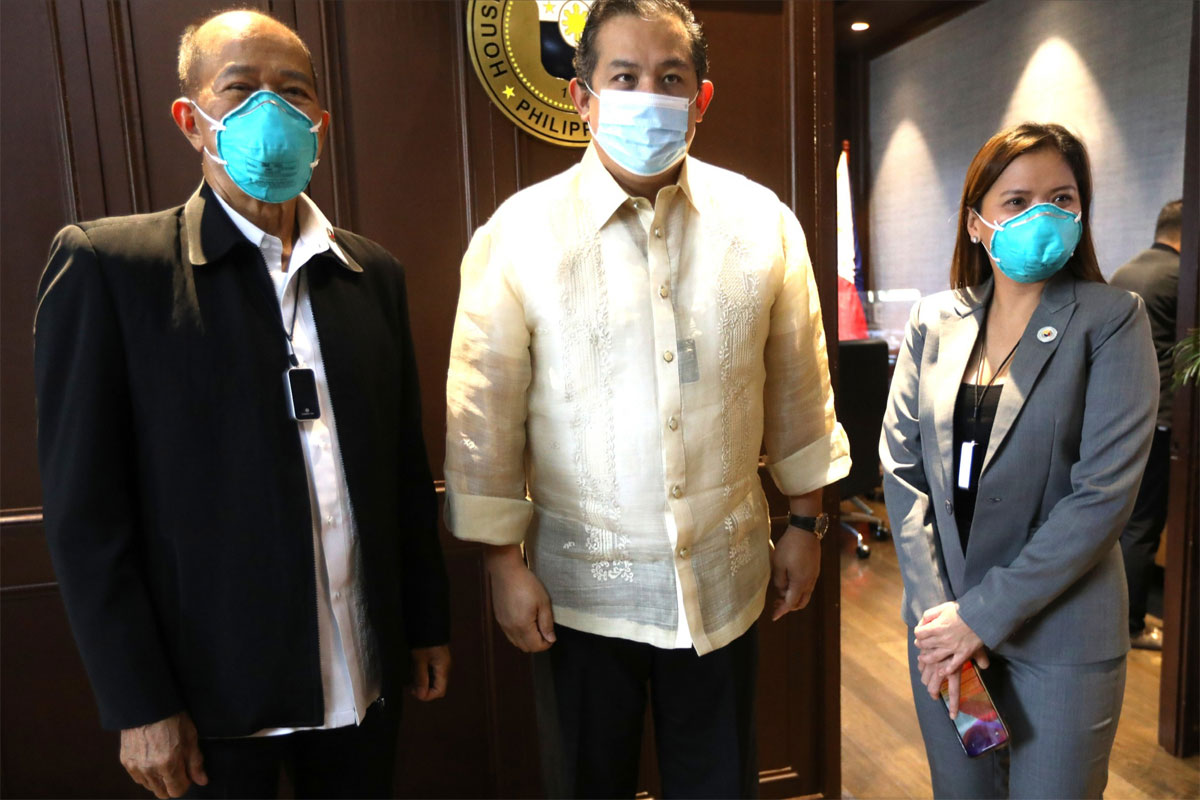 House Majority Leader and Leyte Rep Martin Romualdez (center) and Assistant Majority Leader Rep. Julienne Baronda (right) welcome Secretary Delfin Lorenzana (left) of the Department of National Defense during a courtesy call at the Majority office after the briefing on the proposed 2022 budget of the DND. Photo by VER NOVENO
Nation,

HOUSE Majority Leader and Leyte 1st District Rep. Martin G. Romualdez on Wednesday commended Defense Sec. Delfin Lorenzana for the gallantry displayed by the Department of Defense (DND) in defending the territorial integrity and sovereignty of the Philippines from all external and internal threats.

“I give my snappy salute to the men and women of the Department of National Defense (DND) under Sec. Lorenzana’s leadership for displaying their utmost gallantry in ensuring the territorial defense of our country from possible encroachment,” Romualdez said after Lorenzana and his team paid a courtesy call on Romualdez at the Majority Leader’s Office at Batasan Complex in Quezon City after attending the budget briefing on next year’s P5.024-trillion national budget.

“We value and appreciate the contributions of our uniformed services in ensuring national peace and security. Thank you for promoting the welfare of the Filipino people and being a reliable partner in national development,” Romualdez added.

Under the leadership of Speaker Lord Allan Velasco, Romualdez said the House of Representatives supports the 15-year modernization program of the Armed Forces of the Philippines (AFP).

“Congress is always here to provide whatever available resources it can give to the Armed Forces of the Philippines’ for the acquisition of additional equipment to boost its capabilities. My gratitude also to the men and women in the service who have dedicated their lives to the cause and for heeding the call of duty,” Romualdez added.

The following are the attached agencies of to the DND: AFP, Government Arsenal, National Defense College of the Philippines, Office of Civil Defense (OCD) and Philippine Veterans Affairs Office.

During the House committee on appropriations hearing where Lorenzana defended the DND’s proposed P297.13-billion budget next year, he blamed the defective instrument and inappropriate response of the pilot behind the crash of the C-130 plane in Sulu.

“The way it was briefed to me last night (Tuesday) is that it was actually a confluence of many events,” Lorenzana said after receiving the initial report from the Philippine Air Force (PAF).

“One, for the C-130, is defective instruments or systems. Plus, of course, the reaction of the pilot was not also appropriate for the emergency, so nag-crash,” Lorenza said.

Lorenzana said the PAF is finalizing its report that he will submit to the panel chaired by ACT-CIS party-list Rep. Eric Yap within 24 hours.

A total of 53 persons, mostly soldiers died on July 4, 2021 when an Air Force C-130 plane crashed in Barangay Bangkal in Patikul, Sulu.