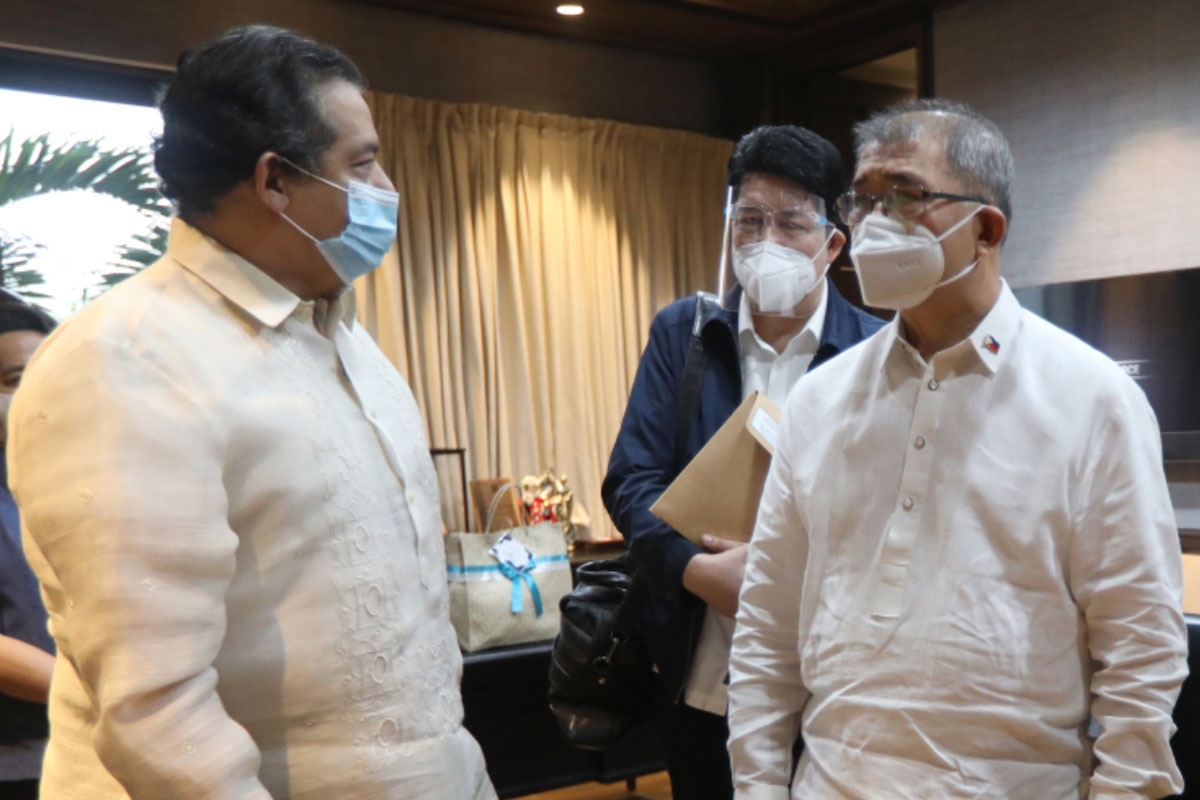 House Majority Leader and Leyte Rep. Martin Romualdez (left) chats with Department of Science and Technology (DOST) Secretary Fortunato De La Peña (right) and Philippine Council for Health Research and Development Executive Director Dr. Jaime Montoya (2nd right) during a courtesy call and short meeting at the Majority Office after the 2022 Budget Briefing of the DOST at the House of Representatives. De La Pena and Montoya updated Romualdez on their current projects to boost the fight versus the new COVID-19 variants pandemic in the country. Photo by VER NOVENO
Nation,

HOUSE Majority Leader and Leyte 1st District Rep. Martin G. Romualdez has assured the swift passage of the proposed Science for Change Program (S4CP) Act of 2021 to achieve a higher standard of science, technology, and innovation (STI) in the country, including the “mandatory” use of publicly funded technologies by national government offices.

Romualdez, chairman of the House committee on rules, responded to the appeal of Science and Technology Sec. Fortunato “Boy” Tanseco de la Peña to pass the bill during the latter’s courtesy call Wednesday night at the Majority Leader’s Office at the Batasan in Quezon City.

“We are committed to prioritize the passage of the Science for Change Program bill with dispatch because research and development will help accelerate social progress,” said Romualdez, president of the Lakas-Christian Muslim Democrats (CMD), adding that prioritizing the development of STI will foster patriotism and development.

“The House of Representatives led by Speaker Lord Allan Velasco recognized that science and technology are essential for national government and progress,” said Romualdez, a lawyer from the University of the Philippines (UP) and president of the Philippine Constitution Association (Philconsa).

De la Peña defended the Department of Science and Technology’s (DoST) P24.338-billion proposed budget under the P5.024-trillion national budget next year, which is three percent lower than its 2021 budget of P25.188 billion.

The bill harmonizes the National Research and Development Agenda (HNRDA) or the outcome-based agenda where all research and development  programs and projects funded by the government are envisioned to contribute to the attainment of the majority of government’s key result areas, particularly responding to poverty reduction and empowerment of the poor and vulnerable; rapid, inclusive, and sustained economic growth; and integrity of the environment and climate change adaption and mitigation.

The DoST, in consultation with government research institutions and other agencies concerned, shall formulate a harmonized HNRDA, which is directly related to the priorities under the Philippine Development Plan.

The House committee on science and technology is still finalizing the final S4CP version of the still unnumbered substitute measure, which is a consolidation of several bills.

The S4CP seeks a higher standard of STI to contribute to the development of the economy and society and to the improvement of the welfare of the nation through prescribing the basic policy requirements for the promotion of STI and comprehensively and systematically promoting policies for the progress of STI.

During the budget briefing, Philippine Atmospheric, Geophysical and Astronomical Services Administration (PAGASA) Administrator Vicente Malano lamented that the modernization program of the agency will be affected by its meager budget.

Malano assured that his agency will continue to work hard to ensure the people’s safety from typhoons and other forms of weather disturbance.

Malano said PAGASA was only given P1.385 billion under the National Expenditure Program (NEP) from their P3.048-billion budget request for 2022.