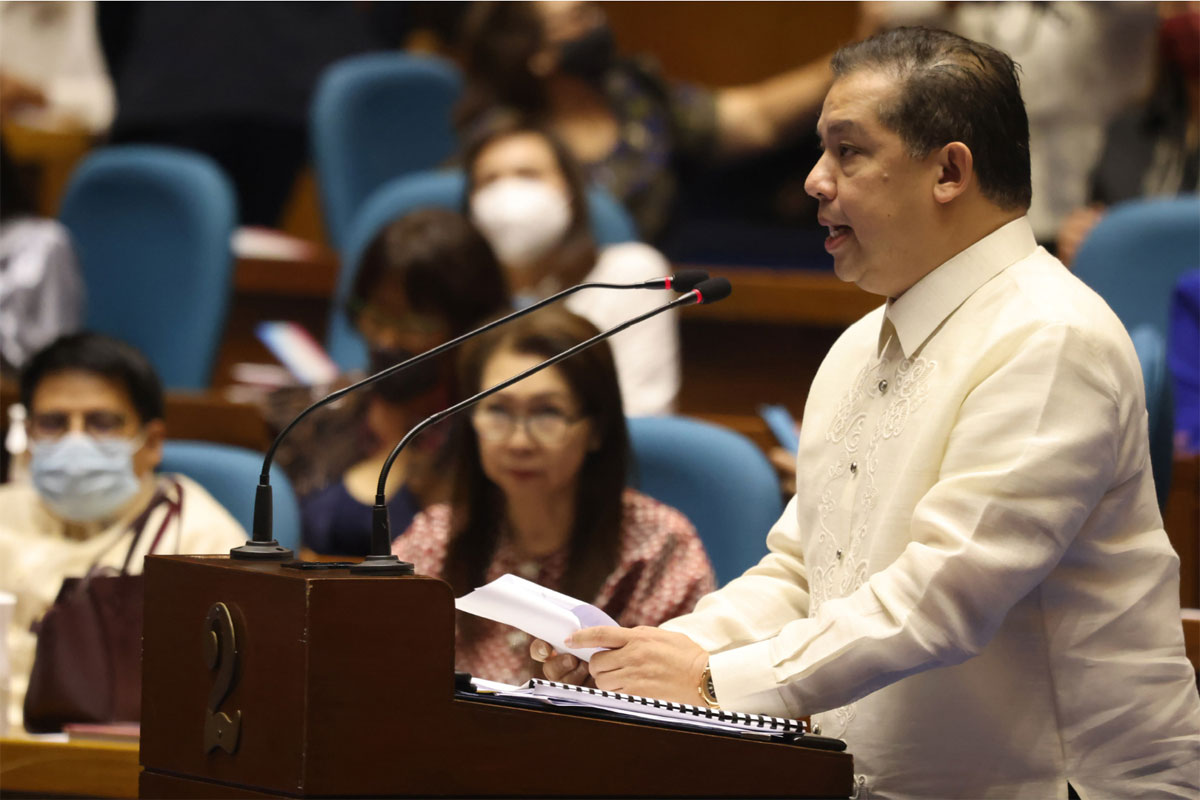 PRODUCTIVE 18TH CONGRESS — House Majority Leader and Leyte Rep. Martin Romualdez delivers his message at the plenary of the House of Representatives Wednesday night during the closing of 18th Congress. He bade farewell to fellow legislators and House employees who worked beyond the call of duty and made their stay in office the most productive ever even amid the COVID-19 pandemic. Photo by VER NOVENO
Nation,

HOUSE Majority Leader and Leyte 1st District Rep. Martin G. Romualdez on Wednesday bade farewell to the 18th Congress with words of appreciation for his fellow legislators and House employees who, he said, “worked beyond the call of duty” and made their stay in office one of the most productive ever even in the age of pandemic.

“I am in awe of the dedication to service and fortitude displayed by Members of Congress and our House employees. They worked beyond the call of duty, at times of uncertainty and abnormality, to make the 18th Congress one of the most productive ever,” Romualdez said.

Romualdez noted that no Congress in modern times had experienced a global pandemic that required people to stay indoors, limit their movement and prevent public gatherings.

“The outbreak of the COVID-19 pandemic posed a big challenge for us here in the 18th Congress. How do we resume work and protect our people from the ravages of the pandemic when senior citizens and people with co-morbidities are discouraged for going out of their residences?,” said Romualdez.

“It was a good move to embrace technology that allowed House members to participate in all proceedings through electronic means including email, teleconferencing, and messaging apps,” he added.

Even as they adopt hybrid sessions, Romualdez said a number of congressmen and House employees still reported for work daily at the risk of catching the virus.

“Who will not be proud to be part of a workforce that reports for duty every day without fail during lockdown, unmindful of the threats posed by the deadly virus on themselves and their family members?” the Leyte solon said.

“While almost everybody locked themselves in their homes for safety in the first few months of community quarantine, House members and employees went out of their way to report for work and perform their duties diligently,” he added.

Despite restrictions in the workplace, Romualdez said the House members worked relentlessly and managed to adopt and approve on third reading at least 1,600 legislative measures since the start of the 18th Congress on July 22, 2019.

More than 300 of these measures had been enacted into law, a number of which were crafted to address the ill effects brought by the pandemic.

Most significant of the laws passed were the Bayanihan 1 and 2, which allowed the release of billions of pesos for pandemic response.

As of April 15, 2021, the Department of Budget and Management (DBM) has released a total of P646.97 billion to support the implementation of various projects, activities and programs (P/A/Ps) in response to the COVID-19 pandemic under the Bayanihan Laws.

Releases under RA No. 11465 or the Bayanihan to Recover as One Act (or Bayanihan II), meanwhile, has amounted to P259.80 Billion.

Of this, P132.65 billion has been obligated with only P93.31 billion disbursed based on agency reports submitted to the DBM. This translates to a 51.06% obligation rate and 70.34% disbursement rate.

In addition to the releases made to support the Bayanihan Laws, the DBM has also released P6.46 billion for various COVID-19 P/A/Ps upon the expiration of Bayanihan I, with P4.17 billion already obligated (64.56%) and P3.22 billion disbursed (77.28%) as of April 15, 2021. Said releases were charged against regular funds under the FY 2020 GAA.