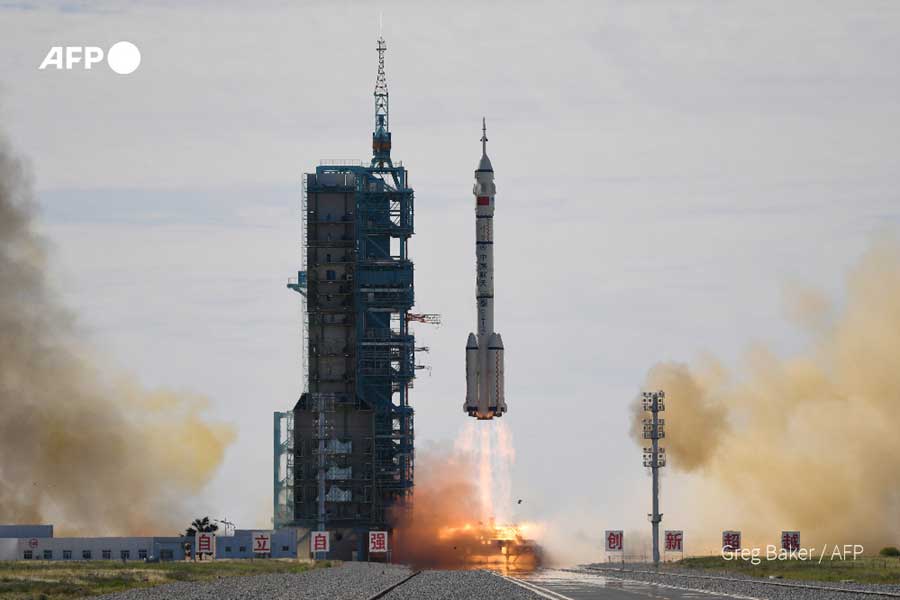 A Long March-2F carrier rocket, carrying the Shenzhou-12 spacecraft and a crew of three astronauts, lifts off from the Jiuquan Satellite Launch Centre in the Gobi desert, in northwest China . AFP/GREG BAKER
World,

AFP, June 17, 2021 — The first astronauts for China’s new space station blasted off Thursday for the country’s longest crewed mission to date, a landmark step in establishing Beijing as a major space power.

The trio launched on a Long March-2F rocket for the Tiangong station, where they will spend three months, in a blast-off broadcast live on state TV.

Lift-off happened at 9:22 am (0122 GMT) from the Jiuquan launch centre in northwest China’s Gobi desert, with the rocket lifting off in clouds of smoke against a blue sky.

At a ceremony before blastoff, the three astronauts already wearing their space suits greeted a crowd of supporters including family members and staff from the space station.

A crowd of space workers and their families had gathered for the ceremony and sang the patriotic song “Without the Chinese Communist Party, there would be no new China”, waving Chinese flags and flowers.

Ahead of the launch, state broadcaster CCTV showed a live feed from inside the spacecraft of the three astronauts waiting to launch, strapped into position and reading through some papers.

Their Shenzhou-12 spacecraft will dock with the Tianhe main section of the space station, which was placed in orbit on April 29.

The module has separate living spaces for each of them, a treadmill for exercise, and a communication centre for emails and video calls with ground control.

It is China’s first crewed mission in nearly five years.

The launch represents a matter of huge prestige in China, as Beijing prepares to mark the 100th anniversary of the ruling Communist Party on July 1 with a massive propaganda campaign.

To prepare for the mission, the crew has undergone more than 6,000 hours of training, including hundreds of underwater somersaults in full space gear.

The mission’s commander is Nie Haisheng, a decorated air force pilot in the People’s Liberation Army who has already participated in two space missions.

The two other members are also members of the military.

The Chinese space agency is planing a total of 11 launches through to the end of next year, including three more manned missions which will deliver two lab modules to expand the 70-tonne station, and supplies and crew members.

The first crew will test and maintain the systems onboard, conduct spacewalks and undertake scientific experiments.

China’s space ambitions have been fuelled in part by a US ban on its astronauts on the International Space Station, a collaboration between the United States, Russia, Canada, Europe and Japan.

It is due for retirement after 2024, even though NASA said it could potentially remain functional beyond 2028.

Tiangong will be much smaller than the ISS, and is expected to have a lifespan of at least 10 years.

Little warmth despite the heat at Biden-Putin summit

US vows to help free hostages in Haiti after ransom demand
October 20, 2021 People's Journal
SHOW ALL