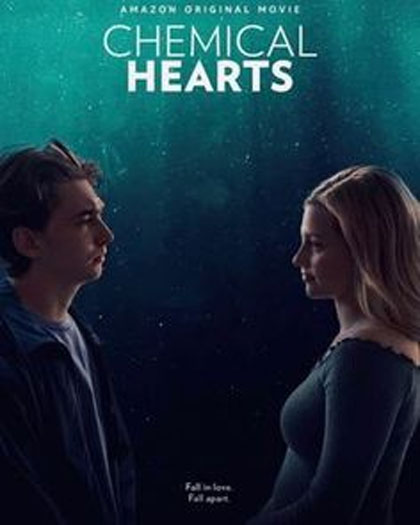 ‘CHEMICAL Hearts’ is a romantic drama on Amazon for young adults based on the novel “Our Chemical Hearts” by Krystal Sutherland, who also wrote the film’s screenplay. The lead character is Henry Page (Austin Abrams of “Euphoria”), a senior high school student who has never fallen in love. He wants to be a writer and is hoping to the editor of their school newspaper.

He feels sad when their faculty advisor tells him he will just be a co-editor, along with Grace Town (Lili Reinhart of “Riverdale”), a new student who just transferred to their school. Grace was the editor of the paper in her former school.

She walks with a limp and uses a cane. She also keeps to herself and tries to resist Henry’s attempts to be friends. But Henry decides to miss their schoolbus and just walks with her going home.

Slowly, she opens up to Henry.

One day, he follows her secretly and she goes to the tomb of a guy who turns out to be her former boyfriend who died in a car crash. This is also the reason of why her leg was damaged and she chose to go to another school. Henry falls in love with her even if she remains evasive about her past. Little by little, she seems to properly reciprocate his feelings.

They eventually sleep together and it’s Henry’s first time to be with a woman. At first, they seem happy with each other, but it’s clear that Grace still has not escaped from her traumatic past. Henry finds out that she’s actually living with the parents of her dead boyfriend and even sleeps in his room.

They end up breaking up and avoid talking to each other even in school. They still work on their newspaper and in its final issue, Henry writes an article about the biochemistry of young people which clearly applies to them.

The film is ultimately a journey of self discovery for each of them that captures the confusion and difficulties of being a teenager. It also delves into grief and heartbreak, how painful first love can be. But as teen melodrama, we’re wondering why it chooses to focus on Henry when the story of Grace seems to be much more riveting and interesting.

Both Austin and Lili do not look like they’re high school students, but Lili brings so much intelligence and sensitivity in her interpretation of her damaged character. Austin Abrams is lucky to be having good projects like “The Walking Dead”, “Paper Towns”, “Dash & Lily”.

In “Do Revenge”, a new movie on Netflix, he plays a high school hunk who is just irresistible to girls. This is quite hard to believe as he’s not really that good looking, he’s not hunky and he’s vertically challenged at 5’6”.

“Chemical Hearts” as directed by Richard Tanne tries to capture the bittersweet feelings of young love but the mental health/grief angle and emotional kinks used in pushing the narrative forward is not really that effective in involving us.

We honestly want to tell Grace to come on, just move on, life goes on. But the film tries hard to be modern in its orientation, introducing blacks, Latinos and Asians in the cast; even persons with disabilities, and also same-sex romance between two female members of the cast. And if you are a fan of young adult romantic novels and movies, maybe you are the perfect target market to enjoy this kind of movie.