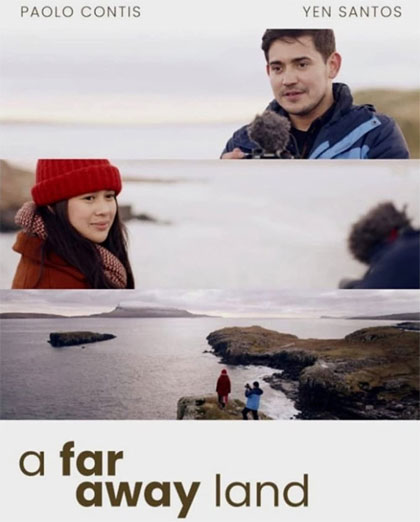 ‘A FARAWAY Land’ is a local film shot in Faroes, volcanic islands in the Arctic Circle which are part of Denmark, by Filipino filmmaker Veronica Velasco, who obviously loves Scandinavia and the Nordic countries as she earlier shot “Nuuk” in Greenland and “Through Night and Day” in Iceland.

Paolo Contis (who did a very good job in ‘Through Night and Day’) plays Nico, a TV reporter who is doing a documentary about Pinay OFW’s in Faroes who are married to locals there. His contact is Mahjoy (Yen Santos), who has a successful food cart and catering business. She is married to Sigmund Garaloy (Hans Torgaro) with whom she has a daughter, Lena.

Sigmund is currently out of town so Mahjoy is free to spend time with Nico and show him around. It is easy to predict from the start that Nico and Mahjoy will eventually develop feelings for each other and have an affair. As such, it really has not much difference from other local love dramas that romanticize infidelity. It’s just set in a breathtakingly beautiful exotic island.

Films and TV series about an unfaithful spouse are a dime a dozen and the really good ones make you sympathize with the characters even if you know they’re treading the wrong path. In the case of “A Faraway Land”, you don’t feel conflicted about Nico and Mahjoy’s love affair. It’s like this element was just forced to give the film some kind of major conflict.

From the start, Nico knows Mahjoy is very much married and Mahjoy has a very good and supportive husband who seems much older than her but with whom she doesn’t even have a cultural conflict. But they just want another movie about the unfaithful wife and her forbidden affair, with a bittersweet ending, something like “Bridges of Madison County” whose main ace is it stars Meryl Streep.

The film actually has an interesting revelation at the start. There are about 300 Pinoys living in the island and most of them are mail order brides who found their Faroese husbands in the internet. Despite the cultural differences, they seem to be happy with their marriages.

It would have been more interesting if the film explored their lives and not just of Mahjoy who doesn’t really seem to represent them well. It’s just really sad that film paints a rather unflattering picture of a Pinay Madame Bovary in such a faraway land.

The film’s biggest asset is the Faroe Islands itself, with its gorgeous scenery all around, but we know that a lovely backdrop alone is not enough to make a good movie. We do appreciate knowing idiosyncratic details about the Faroes, like only potatoes and turnip grow in its soil. But Mahjoy tried planting calamansi and she’s quite successful.

We’re also introduced to their unique delicacies like their fermented meat that seems like a distant cousin of the Ilocano bagnet. We appreciate it that Direk Veronica Velasco hires Paolo Contis as a leading man. We’ve always believed that he is one of our most versatile actors who can do both comedy and drama with equal ease.

He gives another winning portrayal as the easy going but sensitive Nico, but if you’d believe the grapevine, what happened in the movie also happened to him and Yen Santos in real life, causing the end of his relationship with LJ Reyes. And this is the more significant reason why this movie will be remembered.