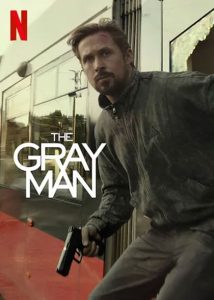 ‘THE Gray Man’ is the kind of action flick that critics love to tear to pieces but which ordinary viewers get to appreciate and enjoy more. It is based on a series of novels written by Mark Greaney, a former collaborator of Tom Clancy, and this is the first novel published in 2009.

The movie opens with CIA officer Donald Fitzroy (Billy Bob Thornton) meeting a prisoner, Courtland Gentry (Ryan Gosling), who is jailed when he was still a minor for killing his abusive dad to protect his younger brother.

Donald says he can obtain Courtland’s freedom if he’d work with the CIA as a secret assassin in its Sierra program.

Eight years later, Courtland is now known as Sierra 6, a dependable assassin who takes out the world’s bad guys. He is assigned to kill someone with the help of a female CIA agent, Dani Miranda (Anna de Armas). He succeeds in shooting his target but his victim tells him that he is also a CIA agent known as Sierra 4.

Before dying, he gives to 6 a USB flash drive containing evidence against corrupt CIA officer Denny Carmichael (Rege Jean Page). 6 refuses to surrender the USB to Denny, who then orders a former CIA agent, Lloyd Hansen (Chris Evans), now a hired mercenary with psychopathic tendencies, to hunt down 6 and get the USB at all cost.

What follows is a cat-and-mouse game with Hansen and his men trying to kill 6 while he’s on the run. To track him down, they kidnap his former handler, Fitzroy, who they know is close to 6. When Fitzroy refuses to cooperate, they abduct his frail niece, Claire (Julia Butters), who’s afflicted with a heart problem.

Denny also orders his assistant, Suzanne Brewer (Jessica Henwick) to help Hansen apprehend 6. Suzanne quickly realizes that Hansen, who was fired by the CIA for his lack of ethics, is a sadistic nutcase who just loves brutality.

Hansen has taken Claire to his base in Croatia and 6 follows them there to rescue Claire. Earlier, he has sent the USB to former CIA chief in the U.K., Margaret Cahill (Alfre Woodard), in Prague. The film’s climax occurs in Hansen’s HQ in Croatia where he and 6 finally get to confront each other face to face.

“The Gray Man” is directed by the Russo Brothers, Anthony and Joseph, who did four Marvel Cinematic Universe flicks, including the last one, “Avengers: Endgame”, one of the highest-grossing films of all time. It cost them $200 million to do “The Gray Man”, a globe-trotting actioner that takes us to Bangkok, to Berlin, to Prague.

We don’t know if Netflix could recover its huge investment considering this was quickly shown on their streaming platform, which is too bad since this big-budget spy thriller has many slambang spectacular action set pieces ala-Michael Bay that are best seen on the big screen.

If you enjoy watching action flicks that have plenty of shootouts and mayhem, you’ll enjoy “The Gray Man”. It has enough frenetic energy to hold your attention for about two hours. One of the best sequences is set in Berlin when German cops capture 6 and handcuffs him to a park bench in the middle of a plaza.

Several vehicles with heavily armed thugs attack and shoot it out with the cops to get 6, who is unarmed. How Ryan Gosling reacts to all the action around him while his movement is so limited is quite thrilling. He eventually manages to extricate himself and escape, hiding in a running tram.

The next level of action happens while he is inside the tram and goons continue to attack him and he has to face them in hand-to-hand combat. A truck with a rocket launcher then appears to bomb them out. But the spunky Anna de Armas also appears driving a sports car to help rescue 6. This entire sequence is truly stylish and excitingly conceived and realized on screen.

Gosling’s character is relatable as he is a killer with a heart of gold. A flashback gives the film some heart and emotional heft as it shows how he becomes invested into Thornton’s niece and why he is so intent in saving her from Hansen. A shorter series of flashbacks show parental abuse, how Six and his brother were routinely punished by their ruthless father.

Gosling does well as the hero but we can’t help but think that Chris Evans would be better in his role and he’d be more effective as Hansen. Evans is obviously having a blast playing his annoying flamboyant douchebag role and he’s very good, but we still feel that Captain America is better off as the hero than being the obnoxious villain.

A sure stand out here is Anna de Armas, who’s the busiest Latina actress working in Hollywood today. He nearly stole “No Time to Die” from Daniel Craig as the agent Paloma. “The Gray Man” is a reunion of sorts for her and Evans with whom she worked in “Knives Out” and with Gosling after they did “Blade Runner 2049”.

We think she now deserves to be given her own starring vehicle. As for Rege-Jean Page, we don’t know why he accepted his villain role here when he made so much of an impact as the romantic leading man in “Bridgerton”.

Review of the Cinemalaya best picture winner, ‘The Baseball Player’