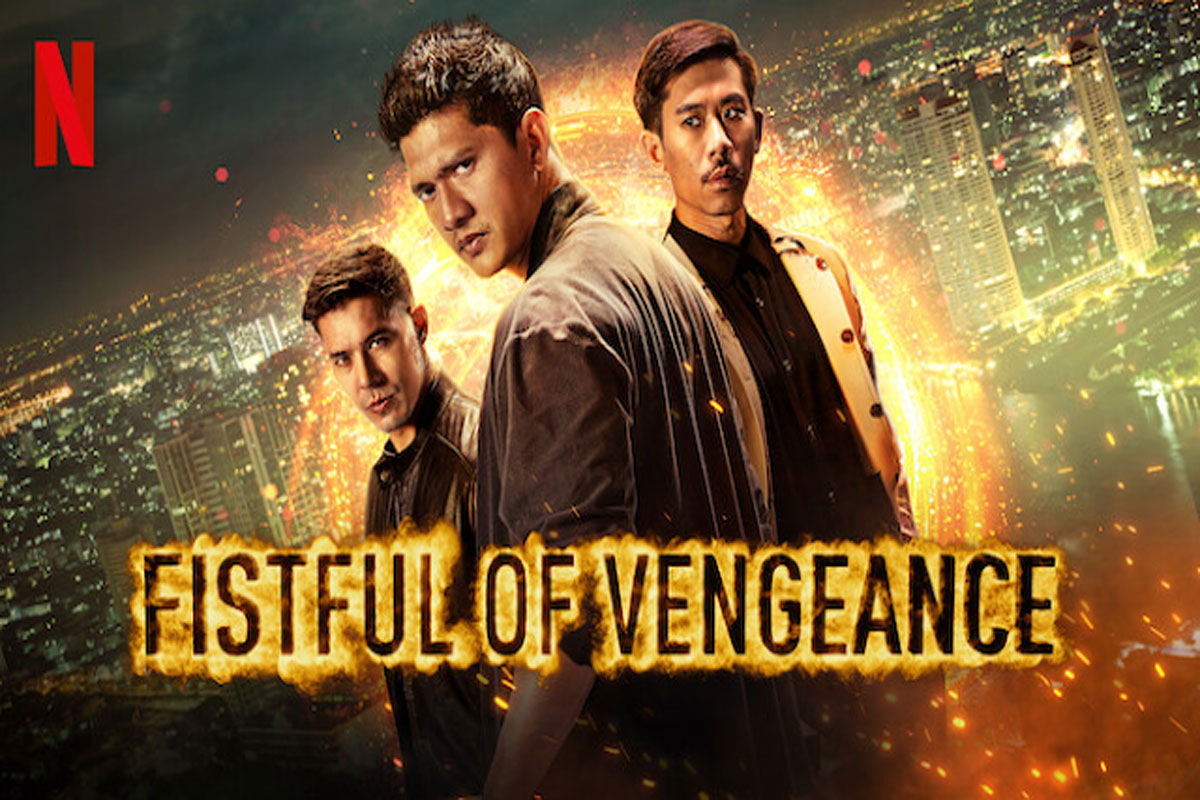 ‘FISTFUL of Vengeance’ is a sequel to the Netflix TV series “Wu Assassins” that ran for one season. It was not renewed for a second season, so they just have a movie instead as follow up. Most of the characters in the series turn up in the movie version, led by Iko Uwais, the Indonesian actor who gained international fame for “The Raid” action flicks.

Iko plays Kai, the Wu Assassin in San Francisco. He and his friends, Lu Xin (Lewis Tan) and Tommy (Lawrence Kao), travel to Bangkok to look for the killer of Tommy’s sister who was murdered in the TV series. An ancient amulet in her necklace was taken by the killer.

A billionaire magnate, William Pan (Jason Tobin), contacts them to help find his twin sister, Ku An Qi (Thai actress Ratha Pongham), an underworld kingpin who has her own supernatural powers. The ancestor of William and Ku is a god, Pangu, who went insane with his powers that are now confined in two amulets.

One is with William and the other one was the amulet taken from Jenny, which actually belongs to Ku, who turned out to be Jenny’s killer. Kai and his friends agree to help William and they plot to confront Ku and get her while she’s in a meeting with Bangkok’s Triad thugs.

Ku knows that they’re coming and Kai is ambushed by his enemy, Zan (Juju Chan), who is working for Ku. The film’s climax happens in an archaeological digging site where it turns out William can shoot glowing balls of fire from his hands and wants to get the amulets for himself so he can be the new god Pangu.

Of course, in hokum action-fantasies like this, we all know that the good guys will eventually win. “Fistful of Vengeance” has some glossy locations and well-choreographed action set pieces, but it all looks somewhat slapdash in its execution. It has more ambitious aims than its TV predecessor, but Director Roel Reine who helmed some episodes of the TV series is not able to fully take advantage of its wide screen format.

It does have its share of violent action sequences. Besides their usual fists and feet used for fighting, all sorts of weapons are also utilized, from guns to machetes and broken bottles and other implements. One character is killed when a spear is shoved down his throat. The fighting is graphic, with heightened sounds of breaking bones and sights of spurting blood.

There’s also some sex and nudity, plus plenty of well-edited hand-to-hand kung fu fighting and some jokes that don’t really land well. But it all lacks polish specially in the screenwriting, for it to excel over the TV series. It’s quite obvious that this film was made because there was no second season for “Wu Assassins” and they want to give its fans a more formal closure.