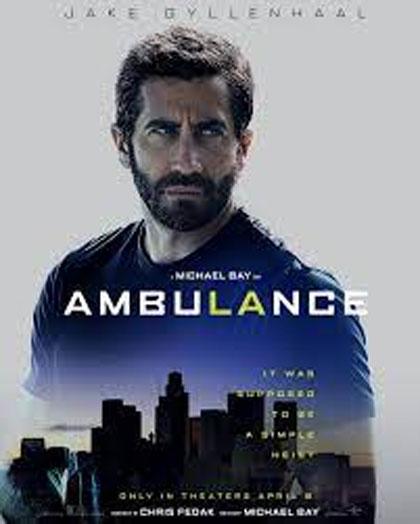 ‘AMBULANCE’ was released in local theaters but didn’t last very long. It’s now available on Prime Video and Apple TV. This is based on a 2005 Danish film with the same title and stars Jake Gyllenhaal. This is Jake’s second remake of a Danish film after “The Guilty” last year.

This is produced and directed by Michael Bay, famous for big-budget action flicks with plenty of explosions, like the hit “Transformers” franchise. It’s about two men, one white and one black, who grew up as adoptive brothers. Danny (Jake) is a bank robber while Will (Yaya Abdul Mateen who won the Emmy for the HBO mini-series ‘Watchmen’ ) is a war veteran.

Will is in need of more than $200,000 for his wife’s surgery and he talks to Danny who persuades him to join his gang in robbing a bank where they will supposedly earn $32 million. Everything seems to be going well, but we all know in movies like this, things won’t go on as planned.

A cop, Zach (Jackson White), enters the bank to ask a bank teller for a date and eventually finds out about the ongoing heist. Danny holds him hostage and this results in a shootout. Los Angeles cops arrive and shoot the robbers. Only Will and Danny manage to get away with Zach, who was shot.

They commandeer a passing ambulance and ask the paramedic inside, Camille (Eiza Gonzalez), to help treat the injured Zach. More cops arrive and helicopters are deployed to pursue the ambulance that Danny uses as their getaway vehicle.

More complications occur when Danny calls a criminal friend to help them elude the cops. The FBI also gets into the picture and this results in more slambang over-the-top action scenes through the streets of Los Angeles that Michael Bay is known for.

We’ve seen this kind of action-thriller before in such hits as “Speed” and “Heat”, where a number of interesting situations pop up while the same kind of scenario plays out on screen. But in the case of “Ambulance”, it fails to keep up the level of tension as the robbers frenetically race around in a highspeed chase with their hostages.

Los Angeles streets are usually clogged with heavy traffic, but here, they are miraculously free from too many vehicles. Sadly, all the explosions and the dizzying drone shots do not really help much in forwarding a cat-and-mouse thriller that doesn’t have anywhere to go.

To begin, we cannot even sympathize with Jake as the bad ass leader of the gang and the attempt to make Will more sympathetic, by making him a good guy who’s doing something bad for a valid reason, doesn’t really make us care about him much or the endless chase sequences. Sorry, but the movie just does not provide a satisfying level of entertainment like Michael Bay’s earlier hit actioners “The Rock” and “Armageddon”.

Review of true crime drama series ‘Under the Banner of Heaven’