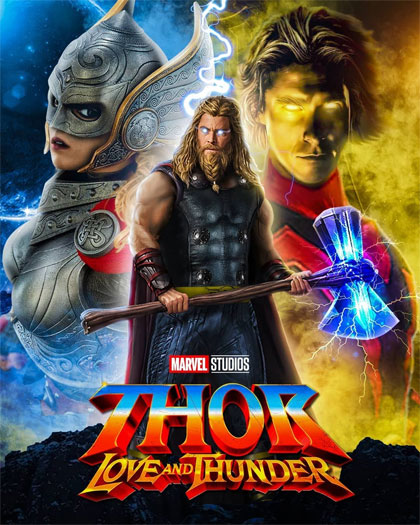 THE first ‘Thor’ movie was shown in 2011 directed by Kenneth Branagh, followed by “Thor: The Dark World” in 2013 directed by Allan Taylor, and “Thor: Ragnarok” in 2017, helmed by the New Zealand director Taika Waititi.

If you’re an MCU (Marvel Cinematic Universe) fan, then you know that Thor, the son of Odin of Asgard, has also appeared as guest in the various Avengers superhero movies.

Now comes, the fourth solo movie in the franchise, “Thor: Love and Thunder”, once again directed by Waititi. It opens with a new character, Gorr (Christian Bale), who is dying in the dessert with his daughter. He calls to their god, Rapu, to help them but his daughter still dies.

A sword used in killing gods, the Necrosword, leads Gorr to Rapu, who then tries to strangle him, but he uses the Necrosword to kill Rapu. Gorr then becomes the god-butcher whose goal is to kill all gods. He gets to kill several gods and his next target are the gods of Asgard.

Thor learns about this and he goes to Asgard where Gorr and his shadow monsters have begin their attack. Before this, we are reminded that Thor has become so sad after everyone close to him was killed (several times in the case of his brother Loki) and he neglected his body that he became fat.

But he has since gotten back his muscular physique, although still missing his one true love, Dr. Jane Foster (Natalie Portman), who was not in “Ragnarok”. In a flashback, it’s shown how their romance turned sour before because they both got so busy.

Jane is now suffering from terminal cancer and she goes to Asgard to get Thor’s hammer, Mjolnir, hoping it would heal her. Thor had previously blessed the hammer to bond with Jane and he is surprised to see Jane again in Asgard, with Mjolnir now belonging to Jane.

They team up with Valkyrie (Tessa Thompson), the bisexual new king of Asgard, and Korg (Waititi), a gladiator made of rocks, to fight Gorr. They defeat Gorr, but he escapes, taking all the children of Asgard with him as hostages in his Shadow Realm.

It now becomes Thor and his team’s responsibility to save the children from Gorr. Of course, it would be easy to guess from here as to who’d triumph in the end.

Waititi’s comedic take on Thor in “Ragnarok” made it a hilarious blockbuster hit, grossing $850 million worldwide, the biggest seller in the series. So it’s not surprising that in “Love and Thunder”, they try to do more of the same.

It seems the movie’s aim is to make audiences laugh as much as possible by coming up with so many goofy, silly gags with the help of head-banging Guns n’ Roses hit songs like “November Rain” and “Sweet Child O’ Mine”. In “Ragnarok”, Waititi used Led Zeppelin.

Hemsworth is still compelling on screen as the cheeky, swaggering Norse god, but even more impressive is Natalie Portman who got buff for her role. But Bale nearly steals the movie from them with his role as a Marvel villain hidden in tons of spooky prosthetic make up.

Waititi was obviously given the freedom to do whatever the hell he likes with the movie so he made it a romp with jarring shifts that lack tonal consistency. In the end, it’s a movie that we call “pambata”. Quite cartoonish and tries so hard to please the viewer.

Even the hostaged children are suddenly given their own powers to turn into kiddie warriors battling shadow monsters. As some sort of a pa-consuelo de bobo, the movie offers many cameo performances, led by Chris Pratt and the whole gang from “Guardians of the Galaxy”.

Will there be another sequel? You betcha! They already announced in the end credits: they will be back. And why not? The film has so far grossed $670 million worldwide. And counting, since it’s still showing. Waititi rides again!