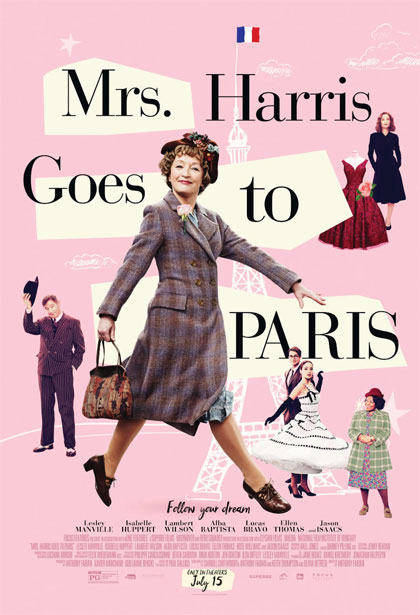 The story is set in London in 1957. The title character is Mrs. Ada Harris (Lesley Manville), whose husband died in World War II and now works as a cleaning lady. While cleaning the house of a wealthy client, she sees a beautiful haute couture dress by Christian Dior and just doesn’t fall in love with it but becomes obsessed with buying her own dress by Dior, even if it cost her 500 precious pounds!

She starts saving money and even resorts to gambling to raise funds for the dress and for her trip. She then takes the boat to cross the English channel and has an adventure of a lifetime that will change not only her but also the future operations of the House of Dior.

She arrives at Dior while it’s having its 10th anniversary. The snooty director, Claudine (Isabelle Huppert, who plays a minor role), looks down on her as she seems out of place in the elitist world of high fashion. But one of the models, Natasha (Alba Baptista), and the Dior accountant, Andre (Lucas Bravo), befriend the good-natured Englishwoman.

A French gentleman, the Marquis de Chassagne (Lambert Wilson), is also very pleasant to her. Charmed by her lack of pretensions and her honesty, he offers to take her inside the House of Dior to watch the fashion show. She takes a fancy on one of the dresses the models wear.

She says she is paying with her hard-earned serving and the Dior people hesitantly agree to make a dress for her. While staying in Paris for her fittings, Andre, asks her to stay with him in his flat.

She notices that he is secretly in love with Natasha but he’s afraid to express his feelings for her, so Mrs.Harris becomes a matchmaker for them.

Dior is going through some financial problems and several of his workers are about to lose their jobs. Andre has some good ideas on how to improve the business operations of Dior but he’s shy to tell his plans to Mr. Dior himself (Philippe Berlin.) It’s Ada who is brazen enough to tell Dior that he has to listen to Andre’s ideas to make his fashion house more modern and profitable.

Dior is impressed with Andre’s proposals and uses them. Mrs. Harris gets her dress and returns to London with it, but disaster is waiting for the dress in Mrs. Harris’ own home turf. That’s as far as we share so as not to spoil how this feel good story is resolved.

Lesley Manville is the ex-wife of Gary Oldman and a favorite actress of acclaimed British director Mike Leigh. She has appeared in many of his films like “Topsy Turvy” and “Vera Drake”. But we think her international break out role is as the elder sister of Daniel Day Lewis in “Phantom Thread” by Paul Thomas Anderson for which she got an Oscar nomination as best supporting actress.

She then went to Hollywood to play a villainous Ma Barker kind of role in “Let Him Go” versus Kevin Costner. Now, she plays a more endearing character as Mrs. Harris. We see her early morning routine everyday: leaving he flat to take the bus on her way to cleaning houses, a bland job that seems to offer a bleak future.

But she’s a decent, pragmatic woman with a cheerful sense of humor that makes her survive her life alone. Her contagious humor helps her in Paris as she deals with vagrants who could easily rob her but instead guide her safely to the House of Dior.

Manville plays the title role with much effervescence and exuberance it’s so easy to like her. “Mrs Harris Goes to Paris” is the kind of heartwarming film where you voluntarily suspend your disbelief to make it more convincing. But the film is obviously made with a lot of good will and whimsy, so just enjoy it for its joyous entertainment value.

Co-written and directed by Anthony Fabian, best known for “Louder than Words”, based on the true story of how a famous children’s hospital was built in New York. The story happens while Parisian garbage workers are on a strike and the city is littered with trash. This is used as a symbol for worker to organize, like what happened when Mrs. Harris exhorted the workers of Dior who are about to be laid off.

Natasha and Andre are both fans of existential author Jean Paul Sartre. They discuss what is the true nature of being. Are we defined by what we do or possess? It’s Mrs. Harris who shows them the film’s message: the quality of one’s character is always more important than one’s social status, riches or possessions.

The film’s cinematography is lush and luscious, with the period production design also a real treat, specially the dresses made by Oscar-winner Jenny Beavan for the fashion show that transports us to the world of 1950s high fashion.