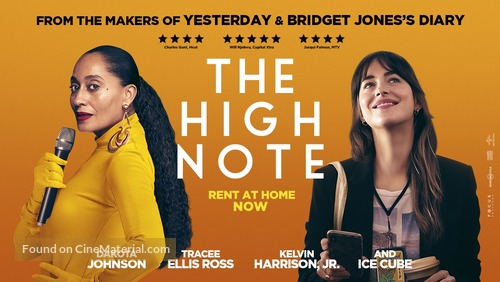 Review of engaging musical-romance about singers and producers, ‘The High Note’

WE liked Dakota Johnson and her sweet beauty the first time we saw her as Anastasia Steele in “Fifty Shades of Grey”. But after that hit pulp series, this daughter of Melanie Griffith and Don Johnson did mostly forgettable films like “A Bigger Splash”, “Black Mass” and “Bad Times at the El Royale”. We’re glad we finally got to see her in a film where she shines, “The High Note”, which is about the music industry.

She plays Maggie, the personal assistant of a big R&B singer, Grace Davis (played by Tracee Ellis Ross, the daughter of Diana Ross), who’s still popular in staging concert tours but has not had a new hit song for many years. Maggie runs errands for Grace but her dream is really to become a music producer. In her free time, she remixes Grace’s old songs to give them a new sound.

Jack (Ice Cube), Grace’s manager, actually believes that she is over the hill and should stop recording new material. He thinks it’s better for her to just accept singing residency in a Las Vegas hotel where she can get a regular income. When a top music producer does a modern remix of her song, Grace disapproves it and favors instead a remix that Maggie has done.

While running errands for Grace in a convenience store, a handsome black guy befriends Maggie and she later sees him performing in public on the street. His name is David Cliff (Kelvin Harrison Jr.) and he’s a very good singer-musician.

He invites her to his house and discovers that he is actually quite rich. She tells him she’s a music producer and she can help him do an album. He agrees and Maggie starts coaching him as he records his demo. Romance also blooms between them.

Grace is about to release a new album of her remixed songs and when they cannot get a name singer to open the launch for Grace, Maggie thinks of David to sing his own songs. She does not inform David about it and at the night of the event, when David learns she’s not really a producer and she wants him to sing for Grace Davis, he gets mad and leaves immediately.

When Grace learned she has no opening performer, she also gets mad and fires Maggie. Now jobless and brokenhearted, Maggie returns to her dad, Max (Bill Pullman), a DJ, who sees her moping so he encourages her to apologize to David.

But before you think this would end badly for Maggie, let’s just tell you this is a feel-good movie. As a matter, it has one of the most satisfying endings we’ve seen lately. There’s a twist we didn’t see coming that works really well as it gives the story an emotional backbone and makes it so heartwarming.

The film not only works as a story about the behind-the-scenes happenings in the music industry (how songs are created and recorded) but also as a fairy tale-love story about not letting go of your dreams. All the conflicts are resolved in an endearing way.

It’s better than films about the music industry we’ve seen recently, like “Begin Again” and “Yesterday” and the film is elevated by the super empathetic performances of the three main stars, Dakota, Tracee and Kelvin. They all have a winning affable screen presence and their music is uplifting. We’d like to see more of Dakota doing good lead roles like this.

Tracee Ellis (best known for long running TV series “Girlfriends” and “Black-ish”), whose role as a superstar singer reflects that of her own mom, is also fabulous. And Kelvin is definitely one of the best likeable young black actors working in Hollywood today. We quickly checked his past works and we’re now looking for copies of “Luce” and “Waves” where he got glowing good reviews.

Review of Netflix drama, ‘A Fall from Grace’ from Tyler Perry