Journal News / Entertainment / Concerts and Movies / Review of ‘Don’t Look Up,’ a biting satire about the end of the world 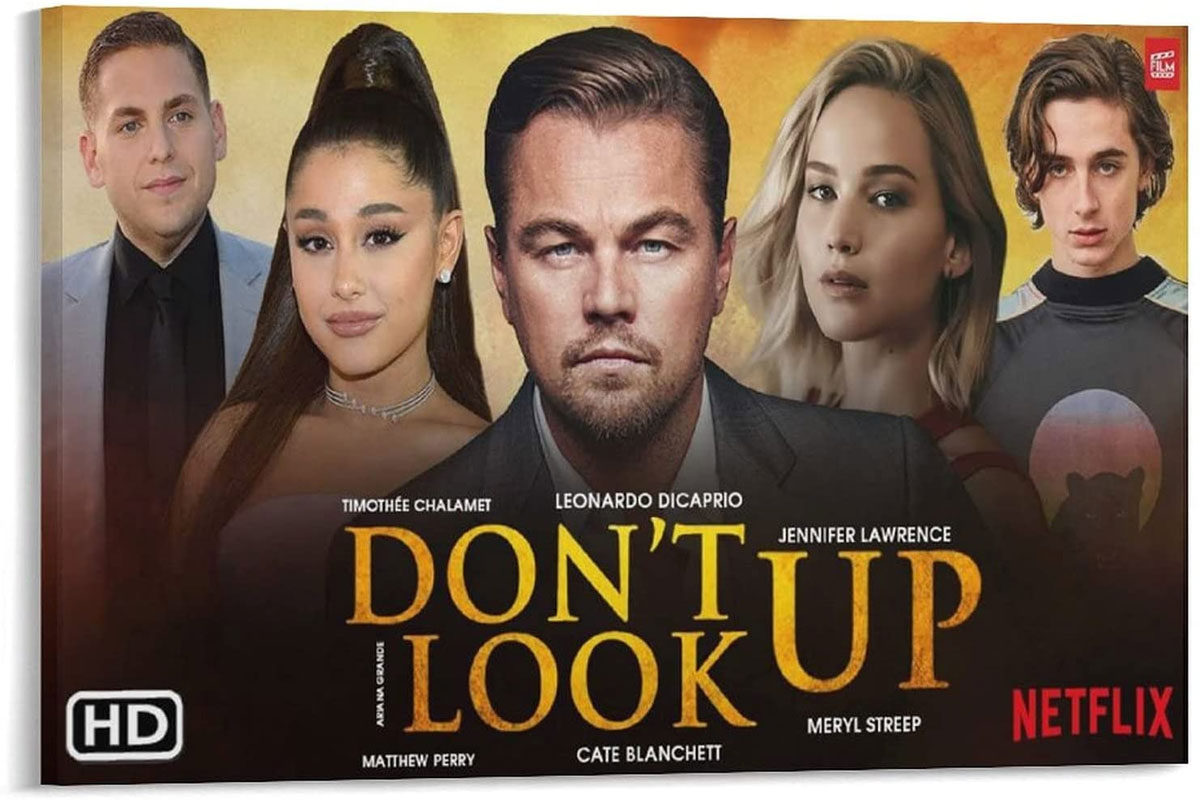 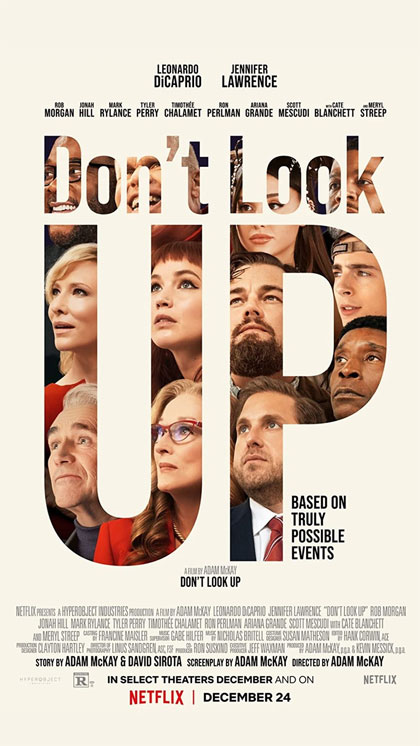 ADAM McKay is the director of such hit Will Ferrell comedies as “Anchorman1 and 2”, “Talladega Nights”, “The Other Guys”, and Oscar-nominated films like “The Big Short” (for which he won the best adapted screenplay award) and “Vice”, about VP Dick Cheney that got several Oscar nominations.

He now comes up with “Don’t Look Up”, about an astronomer, Kate Dibiasky (Jennifer Lawrence), from Michigan State University, who discovers a comet that is on a direct collision course with our planet. Her professor, Dr. Randall Mindy (Leonardo DiCaprio), estimates that the comet is about 10 kilometers wide and can hit the Earth in six months, causing world wide catastrophic devastation.

Together, they inform NASA boss Dr. Oglethorpe (Ron Morgan) about it and he accompanies them to the White House to officially inform the U.S. President, Janie Orlean (Meryl Streep, channeling a female Trump), who doesn’t seem to be aware of the gravity of the situation, along with her buffoonish son and chief of staff, Jason (Jonah Hill.) They are made to wait for hours then just sent away, making Mindy asks: “Does the president know why we are here?”

Oglethorpe tells Dibiasky and Mindy to report their findings directly to the media. They appear as guests in a morning talk show called “The Daily Rip”, hosted by Brie Evantee (Cate Blanchett) and Jack Bremmer (Tyler Perry.) Again, they are not treated seriously. Dibiasky gets so infuriated she rants about the threat of the oncoming comet. She is mocked online and even her own boyfriend denounces her in public.

Orlean changes her tone when she is implicated in a sex scandal with the man she’s nominating in the Supreme Court. To take away the public’s attention from her scandalous shenanigans, she confirms the existence of the comet and says she has a project that will use nuclear weapons to bomb out the comet and divert its path.

But she drops this plan when one of her top donors, Peter Isherwell (an unrecognizable Mark Rylance), a billionaire who owns a technology company called BASH, tells her that the comet contains trillions of dollars worth of various rare precious minerals and elements like gold, etc.

He says he has a new technology that will blast the comet and break it into pieces so that its precious pieces will just drop into the ocean where they can later on retrieve it to exploit the comet commercially to their advantage.

His plan has not been reviewed or approved by scholars or peers, but Orlean appoints Mindy as her national science advisor who approves of her plans and also has an affair with Cate Blanchet even if he has a wife (Melanie Lynskey) and children.

Dibiasky is despondent and returns home to her town in Illinois where she meets Yule (Timothee Chalamet), a teenage shoplifter who turns out to be very religious.

What’s even more sad is that the general populace seems to be indifferent to all that is happening, even if the comet has already become visible to the naked eye, indicating an impending apocalypse.

The film is a socio-political commentary presented as a comedy about the world coming to an end and people seem to be just oblivious of it. The star-studded cast alone would be enough to entice you to watch it, from Streep and Lawrence to DiCaprio and Blanchett who all do well in their respective roles.

We read somewhere that scientists are endorsing it as it perfectly mirrors their frustrations and disappointments with the government. A lot of them are all warning us about the hazards of climate change, the result of years and years of pollution and neglect of the environment, but some foolish politicians like Donald Trump don’t even believe in climate change, despite valid proofs of the world’s worsening conditions.

As for the apathetic public, only mindless entertainment is what matters most. Even now, those anti-vaxxers believe that there is really no Covid pandemic. The world’s collective IQ today is no doubt down in the dumps, what with people now dumbed down by social media, with their attention spans getting shorter and shorter with the brief footage or videos they watch on Youtube or Tiktok.

The movie may look silly at times but there is no doubt that it is a spot on condemnation of the absurdity of the times we live in, nailing it in showing how government officials and the media can lie brazenly while people remain to be complacent and uncaring.

The “Don’t Look Up” title is actually what greedy politicians and their cohorts want us to do: just go on with our mundane lives, not really minding what’s happening around us as long as they are distracted with “kababawan” stories. People are all “marites”, more obsessed with celebrity stories, as shown in the movie where the lovelife of pop star Ariana Grande is more important than national news.

Well, it’s just like that here. The moment someone unfollows his or her loved one in Instagram, it becomes national news and people speculate why they broke up, like what just happened to Tom Rodriguez and Carla Abellana. Which makes us think, if people are now really that so “babaw”, what do we care if they all end up dead?

The movie has other jokes, like Chris Evans suddenly popping up to promote his movie wearing a pin that points both up and down, representing opposing sides of the comet issue. There are also funny post credits scenes. One shows the comeuppance that Meryl Streep deservedly gets for being such an asshole of a president. The other one shows her fat son surviving the comet and emerging from the devastation and calling for his mama. It would have been funny if you’re not yet appalled by all the idiocy.

Review of drama film, ‘Mass,’ about the aftermath of a deadly school shooting 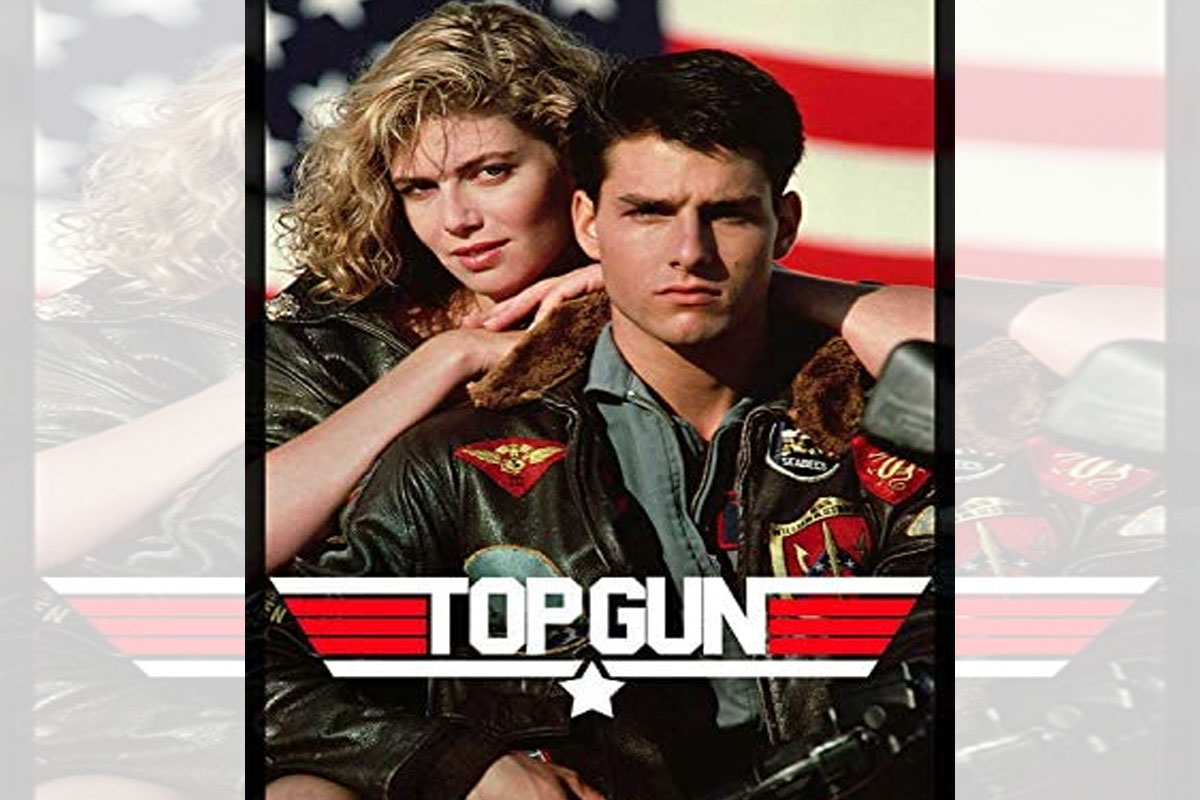