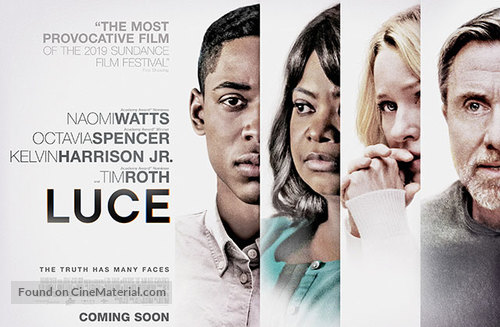 ‘LUCE’ is definitely not a movie for dummies who hate films that make them think. It’s a tricky thing to pin down as it leaves a lot unsaid and defies easy genre categorization, but it’s obvious that it’s a thought-provoking examination of unconscious racial discrimination in America. It’s as if the film is playing a mind game with us the way that Luce is playing a mind game with the people around him.

Luce is the name of the lead character, played by the amazing Kelvin Harrison Jr. He was a 7-year old survivor of the war of independence in Eritrea in Africa when adopted by the Edgars, Amy (Naomi Watts) and Peter (Tim Roth.) He underwent intensive therapy with the Edgars and is now a high school senior considered as a top model in academics by his teachers. He also excels in athletics and is a very articulate public speaker.

But his history teacher, Harriet Wilson (Octavia Stevens), seems hostile to him. She calls his mom Amy and tells him he wrote about Frantz Fanon, a political philosopher from the French colony of Martinique who advocates violence to fight colonialism. Ms. Wilson is aware of Luce’s background as a boy soldier in Eritrea and his current views might cause him conflicts later on.

She has also gone through Luce’s locker and finds a bag of illegal fireworks that she gives to Amy. Amy and Peter decide not to reveal what they know about Ms. Wilson and instead just ask Luce about her. He says Ms. Wilson has previously singled out his friend, De Shaun, for keeping marijuana in his locker. Because of this, De Shaun lost his scholarship as an athlete. Ms. Wilson also singles out an Asian girl, Stephanie Kim, who got abused by her classmates while drunk in a party and Luce may have been involved in it.

The narrative gets more and more complicated as the film goes that you no longer know who to believe. Luce is asking some very troubling questions about race and the expectations of respectability on black people who aim to succeed in a predominantly white society or community. We can understand that he is tired of being used as an example and this seeming pressure for one to be always on top can be very oppressive.

The film is based on a play by JC Lee who also wrote the screenplay with the help of Director Julius Onah and there are scenes that show the material’s roots from the stage. Both Harrison and Spencer are excellent in their roles, giving compelling performances as the two complicated central protagonists.

Honestly, it’s hard to pinpoint later as to who is the victim between the two. Is Luce really guilty of what Ms Wilson accuses him of, or is her judgment just muddled by her own biases, specially since she has a mentally-ill sister who shamed her in their school?

We think the script deliberately plans this ambiguity, leaving plot points and characterizations hanging up there for the uncomfortable viewer himself to decipher. Luce says he doesn’t want to be tokenized (“I only get to be a saint or a monster”), but we’re not really sure as to how his mind is working.

The film really invites to be scrutinized but we don’t know how viewers now so used to youtube and tiktok will warm up to it. It’s also about mental illness, sexual abuse, how people can be pigeonholed in a messy socio-political structure.

The final two scenes are even more of a conundrum. In a speech he gives in school, Luce profusely thanks his parents for raising and how fortunate he is to be an American who is given the chance to start a new life, a poster boy about the American dream. But in the last scene, he is shown jogging but his face exhibits so much outrage, contorted by anger as he runs.

Looks like he’s just wearing a mask to conform. And obviously, he’s not happy. And neither will be ordinary viewers who will be kept guessing when they are just looking for simple, uncluttered entertainment.

Review of engaging musical-romance about singers and producers, ‘The High Note’