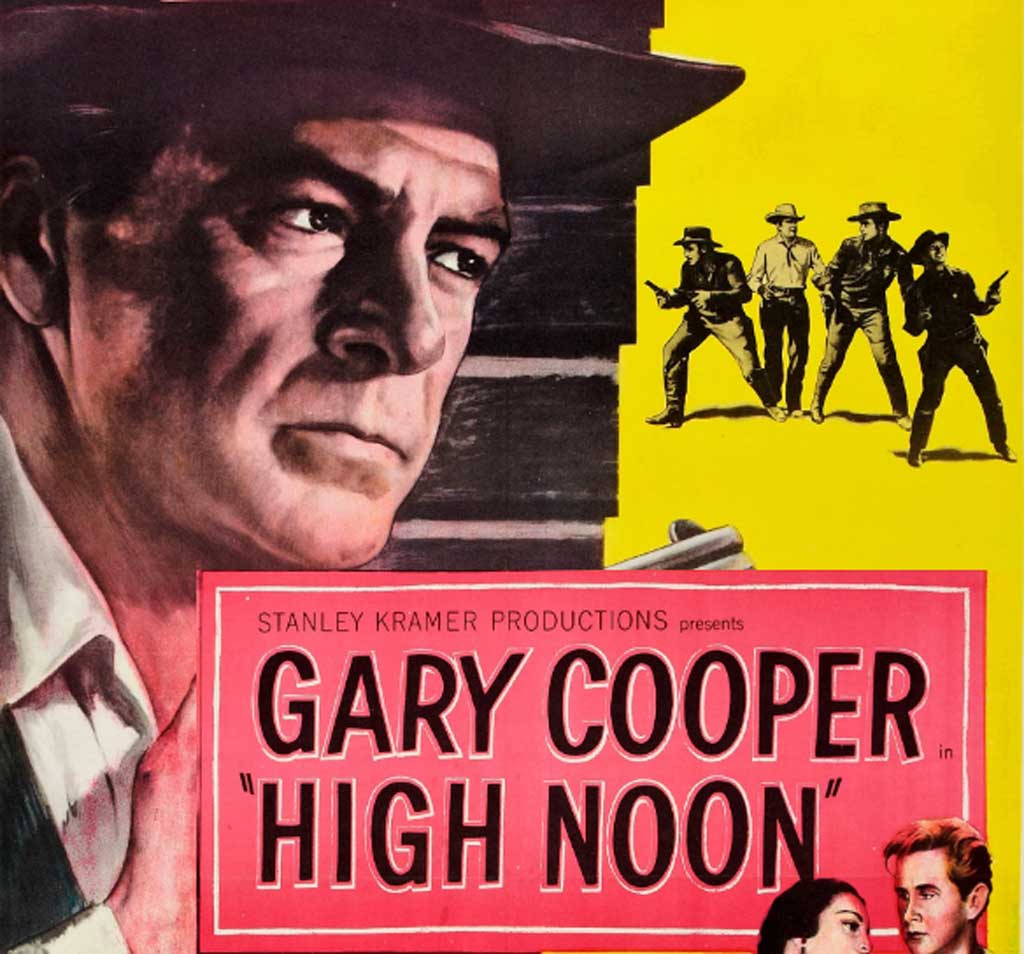 WE are so happy that we finally got to see the classic Western “High Noon” on video. We’ve seen most of the most-acclaimed westerns as a teenager during their revivals at the USIS and in downtown Manila second-run theaters, like “Stagecoach”, “Shane” and “The Searchers”, all of them first-rate examples of excellent filmmaking.

But we never got to see “High Noon”, which won for Gary Cooper his Oscar best actor award and is the movie debut of Grace Kelly who’d later be Princess of Monaco. It was shown in 1952 and we were just six years old then. So now that we got to see it, we finally know what everyone’s raving about and it’s all justified.

It’s so well done by Fred Zinneman, one of our favorite directors who also did “The Nun’s Story”, “A Man for All Seasons”, “The Day of the Jackal”, “From Here to Eternity” and “Oklahoma”. The film also won the Oscar best theme song award for its “Ballad of High Noon” composed by Dimitri Tiomkin. It became a big country western hit famous for its opening lines “Do Not Forsake Me Oh My Darling” and the catchy music was used in a local LVN movie, “Emily”, that won Charito Solis her first FAMAS best actress award. It has a Last Song Syndrome effect.

The film became controversial as it was written by Carl Foreman, who also later did the Oscar-winning “Bridge on the River Kwai” by David Lean, who was a victim of Sen. Joseph McCarthy and his witch hunt trials. Foreman was blacklisted in Hollywood in the 50s, accused of sympathizing with the Communists.

The film is considered as an allegory for McCarthyism with the hero a loner who the townspeople refused to help. It’s said John Wayne, the top cowboy actor of that era, turned this down because he is pro-McCarthy, but later accepted the Oscar trophy for Cooper who can’t make it to the awards night.

The story is set in a small New Mexico frontier town with Gary Cooper playing Will Kane, the marshall who is about to retire. He’s having his wedding to Amy (Grace Kelly) when he was informed that a notorious criminal, Frank Miller (Ian MacDonald), who he sent to jail, has been released and will be arriving on the train by noontime. Miller hates Kane’s guts and wants revenge. His gang of three henchmen are now waiting for him at the train station and they’re out to kill Kane.

All their friends urge Kane and Amy to escape and leave town right away, so that they’ll be gone by the time Miller gets there. Kane and Amy initially go away in their wagon, but along the way, Kane changes his mind. He knows Miller and his men will never leave them in peace. Determined to stand his ground, he returns, angering his newly wedded wife who threatens to leave him and board the train when it comes at noon.

Kane is derided by everyone for coming back. He tries to form a posse to face the gang but former allies who he talked to think his is a lost cost and they all turn him down. Some of them tell him to just go away as a bloody gunfight might even ruin their town. The judge himself who sentenced Miller thought it best to leave town right away on horseback and told Kane to just do the same.

The film is different from the usual westerns that have thrilling chase scenes on horses, exciting gunfights (some involving Indians versus cowboys) and spectacular frontier scenery. “High Noon” is just confined in its small town setting and uses real time. It starts during the wedding after 10 AM then clocks are shown to indicate that precious time is ticking by as the trains nears its destination and tension mounts.

Its suspenseful climax is the actual showdown between Kane and Miller and his men. After watching it, we realized how so many westerns and other action films have imitated it. Even our own FPJ has done it with his own local westerns, notably “Bilis ng Kamay”.

Several U.S. presidents have declared “High Noon” as their favorite movie, specially Bill Clinton who screened it several times in the White House, saying: “It’s no accident that politicians see themselves as Gary Cooper in High Noon. Not just politicians, but anyone who’s forced to go against the popular will. Any time you’re alone and you feel you’re not getting the support you need, Cooper’s Will Kane becomes the perfect metaphor.”

Aside from Kane’s predicament and his betrayal from the towns people, the film touches on other issues. Amy is a Quaker, a pacifist who hates violence after seeing her dad and brother killed. At first, she won’t stand by her husband but in the end, she sticks by him and discards her principle of non-violence.

Kane’s deputy, Pell (Lloyd Bridges), is torn between helping him and nursing his bruised pride and ego after Kane chose not to appoint him as the town’s next sheriff. There’s also Pilar Ramirez (Katy Jurado), the Hispanic saloon owner who used to be Miller and Kane’s girl who is a victim of racism.

If you’d look closer, there are other facets of human nature that the film scrutinizes. In the end, you can’t blame Kane when he chooses to throw his tin star badge into the dirt out of disappointment and disgust with his fellowmen who symbolize the majority of cowardly Americans who chose to remain silent and complacent during the height of McCarthy’s witch hunt.