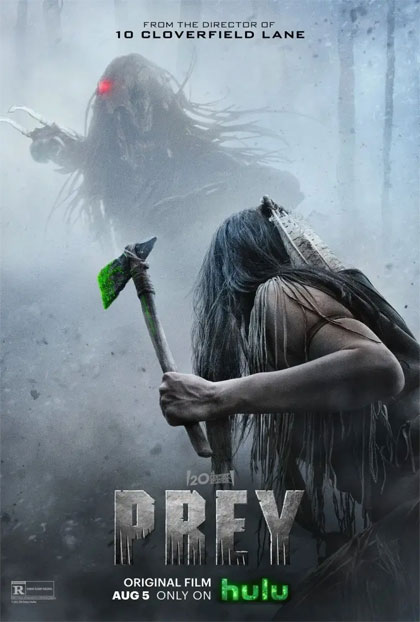 ‘PREY’ is a prequel to the “Predator” franchise that started in 1987 and became a cult classic, directed by John McTiernan and starring Arnold Schwarzenegger. It had some sequels, including “Alien vs Predator” and “The Predator” reboot in 2018.

“Prey” is now streaming on Hulu and is a fresh take on the franchise, with the lead role now played by a female protagonist. Set in 1719 in the Great Plains of North America, the story centers on Naru (Amber Midthunder), a female Comanche warrior who is a skilled hunter but is restrained from venturing further into hunting as she’s a woman, unlike her brother Taabe (Dakota Beavers) who is considered as their leader.

While pursuing a deer with her dog, she sees a spacecraft in the clouds and she cannot explain it. When one of their men is taken by a wild animal, Naru joins her brother and other hunters to look for their missing tribesman.

She knows which plants can be used as medicine so when they find their wounded colleague, she applies herbs on his wounds to help heal him. She then joins Taabe to find the wild animal, but she gets distracted by a burst of bright light, hits her head and loses consciousness.

When she wakes up again, she’s already home. Taabe has killed the animal then carried her back to their tribe who proclaimed him as their War Chief. Naru believes some mysterious creature with an unseen presence is threatening them. No one believes her, so she goes to search for it herself.

Instead, she encounters a bear who attacks her, but the bear is killed by the predator. Naru is then abducted by a group of intruding French trappers who have also held Taabe captive. She and her brother are used by the Frenchmen as bait to capture the predator.

But the predator kills most of the French guys, while Naru and Taabe manage to escape. The predator then runs after them and what follows is a pulse-pounding, action-packed showdown and game of wits between Naru and the alien from outer space.

Director Dan Trachtenberg (“10 Cloverfield Lane”) is careful to make a movie that is respectful to the Comanches and accurately portrays them. His cast is composed mainly by Native Indian talents who use the Comanche language. His movie is even more coherent than some of the sequels that precede it.

The film also champions woman empowerment with the triumphant Naru being proclaimed War Chief in the end. It all works convincingly because of the superb performance of the fearless Midthunder as Naru. She obviously trained hard for the role so she herself can perform the slambang action sequences.

As the fierce, ass-kicking heroine, she’ll remind you of Sigourney Weaver’s Ellen Ripley. She’s clearly the underdog here, using very primitive weapons compared to the ones used by the extra-terrestial who has quite a high tech armory. Her courage in the face of such imminent danger makes this her survival story.

The film has first rate technical values, specially the awesome cinematography by Jeff Cutter who vividly captures the panoramic landscapes of the Great Plains. The action set pieces are all beautifully conceived and executed, offering topnotch entertainment from start to finish.