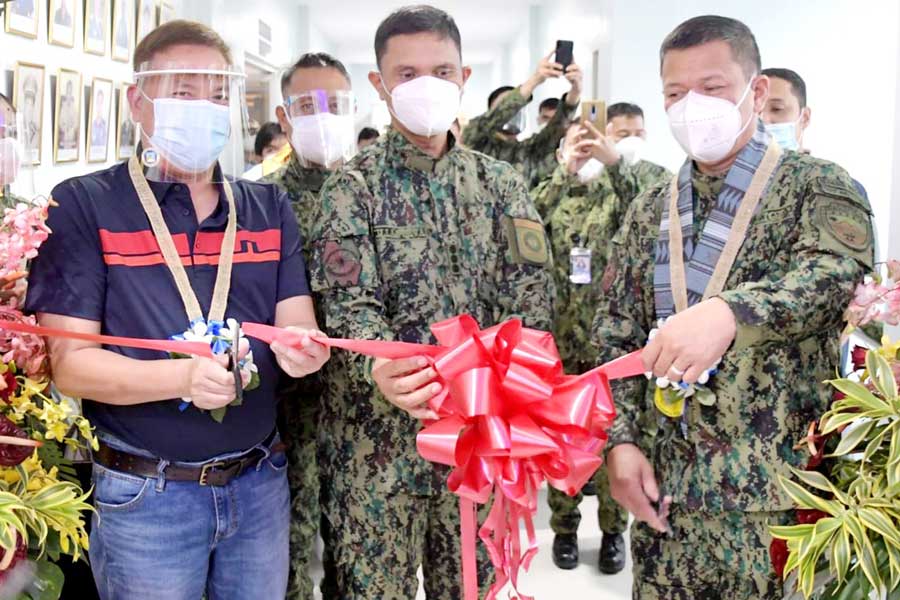 FIRST COMMAND CENTER Calabarzon police director Brig. General Eliseo Cruz (right) graces the inauguration of the newly- constructed Lucena Command Center of the Lucena City Police Station. The project, which is the first of its kind in Quezon province, was funded by the city government under Mayor Roderick Alcala (left). At center is Quezon police director Col. Joel Villanueva and behind him is Lucena police chief Lt. Col. Romulo Albacea. Photo by Gemi Formaran
Provincial,

The Calabarzon top cop proposed the project to Mayor Roderick Alcala during his first visit in this city a couple of months ago.

In his speech during a simple program, Cruz explained that the command center will serve as the venue, where the police commander and his personnel at the office can monitor the activities of policemen in the field through the body worn cameras issued to them by the Philippine National Police headquarters.

“These cameras will answer all the many questions during police operations. Kung legitimate ba ang operation? Nanlaban ba talaga ang suspect? May nakuha ba talagang ebidensya? These common questions will be answered through the cameras, which we can clearly see at the TV monitors inside the command center,” said Cruz.

The regional director, who used to be the provincial officer of Criminal Investigation and Detection Group of Quezon province in 1999, expressed gratitude to Mayor Alcala for his all-out and continuous support to the police.

Alcala vowed to keep his cooperation to the police and thanked Cruz, who in return, promised to provide 10 additional police personnel, with short and long firearms, to the city police force.

City police commander Lt. Col. Romulo Albacea said that as part of the PNP digital transformation and facility upgrade program, “the provision of this city command center will surely help the Lucena police force to efficiently and intelligently protect every Lucenahin from crime and to support field operatives and investigate functions, monitors and records the deployment and movements of personnel, occurence of events and significant incidents, enhance our command and control of all our personnel during the implementation of anti- criminality operations.” Gemi Formaran

DHSUD leads creation of Marawi Compensation Board
May 17, 2022 Jun I. Legaspi

Drunk man nabbed for indiscriminate firing
May 17, 2022 Steve A. Gosuico