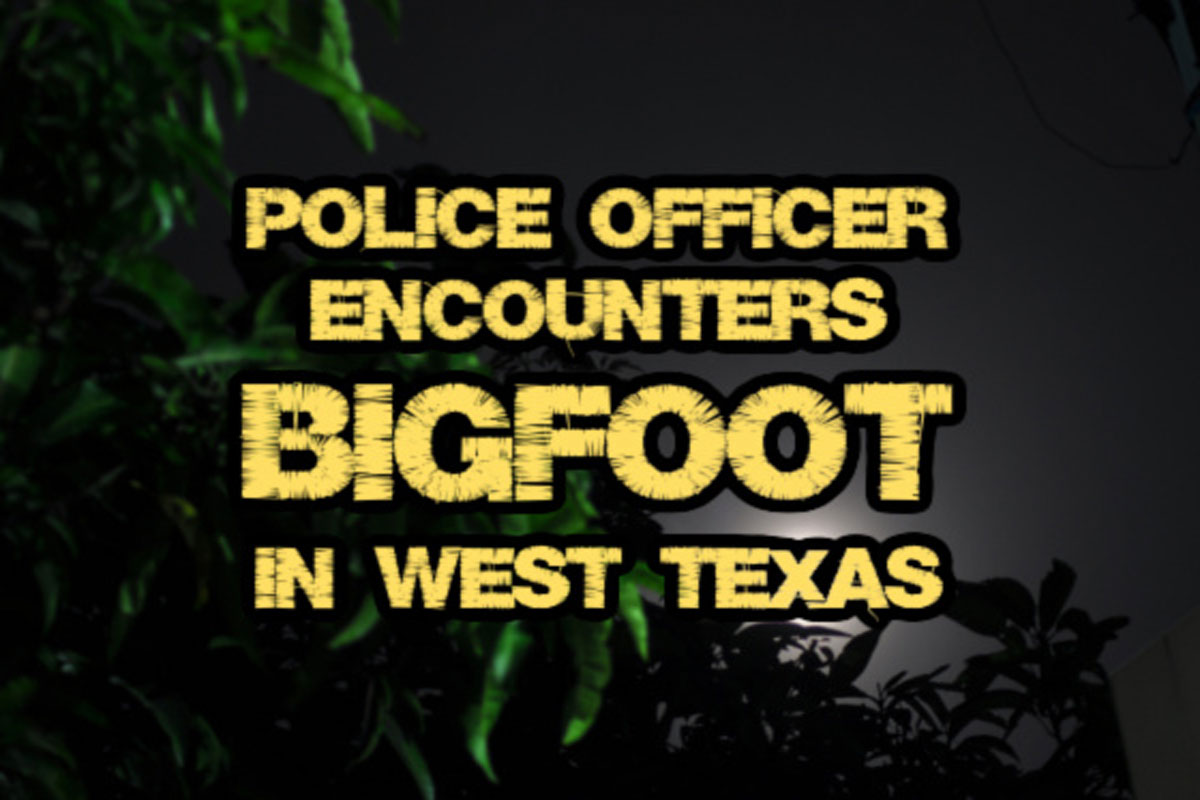 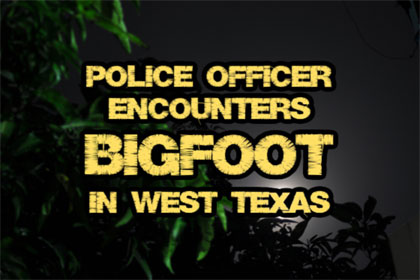 A West Texas patrol officer describes a harrowing encounter with a Bigfoot while in a specific part of the county. Another officer encountered a Bigfoot in the same area one year later.

“As a cop I spend a lot of time dealing with things that scare people. Things they can’t or don’t want to try and explain. I’m usually the person that gets the call to go check out the things that go bump in the night. Add in the fact I usually work alone. In the middle of nowhere. I’ve ran across and seen somethings I can’t rightly explain. This was probably the first time in my career I had been in a supernatural situation. It had happened before in life but cop-wise this was the starting point of what has turned out to be a very interesting career.

One night, on the tail end of July, I was cruising back county roads trying to find some kind of trouble to get in to. As the only deputy out in the county that night I had been busy up to a point. Then the calls had slacked off around midnight. I hadn’t seen a single soul for the last few hours and decided I would try and be proactive for a bit. The night was hot, I had the window rolled down. I had been driving for a few hours straight with no luck at finding anything. The only thing I had scared up was a few rabbits and a fox. I decided to stop, stretch my legs and answer natures calling. I pulled to a stop in a particularly empty part of the county. I had driven the road a few times. It was mostly old, abandoned farmhouses and barns. No one lived in the area, and it made a good target for thieves trying to steal copper or whatever they could get their hands on.

The left side of the road was nothing but cornfields as far as you could see. It was getting close to harvest time. The stalks were close to seven or eight feet tall and just a sea of green. On the right side of the truck was an old, abandoned apple orchard. I never did get the full story of how the land came to be abandoned. It had something to do with multiple mistresses, multiple wills, illegitimate children and other nonsense. The result of which was one hundred and fifty acres of fruit trees that had become its own little forest over the twenty or so years it had been unattended.

I was sitting in the truck, head laid back, just enjoying my little break. I had closed my eyes for a second. When I opened them, I looked out into the cornfield and made direct eye contact with, something. At first, I thought it was a person and it almost gave me a heart attack right there. The thing stood about seven feet tall. Its eyes were human, but they shone in the night like animal eyes. I’m not a weak man, I’ve done more stupid and foolish things in my time then I care to remember. I’ve been afraid before and I’m not above admitting it. There was something about those eyes that absolutely terrified me though.

So, I did what any normal and sane twenty-two-year-old dumb kid would do, and I chased it.

I kept eye contact with the thing. I slowly rolled up my window and without breaking. I checked out with dispatch over the radio and grabbed my patrol rifle off its mount above me.

I remember taking a deep breath and then throwing the door open and jumping out of the truck yelling “Sheriff’s Office” in the most authoritative voice I could muster. I maintained eye contact for the entire time except right as my vision crossed the a-pillar on the driver’s side. As soon as my boots touched the dirt of the road the creature was gone. I caught nothing but a blur as a black and brown shape vaulted across the road and ran in to the trees. Once again, I let my sense of self invincibility get the better of me. I kicked the door closed on the truck and took off after it yelling for it to stop. I stumbled into the forest and was hit with the most overpowering odor. It was a combination of unwashed person, body odor, and animal musk. I still remember the smell vividly all these years later. I’ve been around rotting bodies that didn’t impact me as much as that smell.

I’ve never been a particularly fast runner. I’ve not ever cared much for it and always been more of a short burst kind of guy. Whatever I was going after was fast though. It didn’t dawn on me until much later that it was probably just playing with me leading me further in to its miniature forest. I would catch a black blur moving off the in the distance. I’d hear a branch break or a sound off to the side. I stumbled around like this for a good fifteen minutes before my bravado and adrenalin wore off and I decided I should head back to the truck because I was alone and scared at this point. The whole way back I had that itch between my shoulder blades like I was being watched. Like I was the intruder in someone else’s domain.

I made it out of the trees and back to the truck. It was in the same place I had left it but the drivers side door was open, the dome light on, vehicle turned off with the key still in the ignition. I knew I hadn’t locked the door, but I know it had left it running. I didn’t often turn it off during my shift. I checked the truck making sure it was empty. That same smell filled the cab of the truck. It was in the seats and carpets like something had sat in my seat and just wallowed around in it. I started the truck and got out of there was fast as I could.

I didn’t tell anyone about that encounter. I just told dispatch I had thought I had seen something, that it turned out to be nothing and left it at that. Around a year later during one of the few times I rotated to days and had a partner to work with. I was driving around on the opposite side of the county. I had just cleared a cattle call, playing cowboy pushing some steers back into a fence when my partner called me wanting to know where I was. He was scared and I could hear it in his voice. I let him know where I was, and he asked if I could meet him down on the southwest part of the county. There was an old gin down there. It just happened to be in the same general area of my encounter about a year prior. I had never told him about it, but I agreed to meet him.

The story I got from him was he had pulled into the same cornfield from a year earlier, not too far from where my story took place. He had backed into it down a turn row that was used to maintain the pivot. He decided to stop there to get a few minutes of rest. It was a Sunday morning, like most of our Sundays nothing would really happen until after lunch when people started to get active.

My partner had dosed off for a few minutes and had been woken by his truck violently being shook back and forth with a dust cloud dissipating around him. He first thought it was me just messing with him. When he got out to check he told me he smelled a nasty animal odor. Not finding anything else out of the ordinary he went to get back in his truck and drove away. He drove down to the gin, got out and walked around the place to make sure no one was there. When he went to go get back in the truck he noticed the handprint on top of his window.

Now anyone who has ever driven a truck down a dirt road will tell you handprints on vehicles fill with dust and stand out. He saw the print, freaked out and called me.

Right over his head on the top part of the door and the cab of the truck was the biggest hand print I’ve ever seen in my life. I have average hands for my size. It was easily bigger than two of my hands. I told him my story; he described the smell nearly the same as I did. Neither of us ever found out what was living down there. I heard a few more stories over my time there. I even ran across one guy who was convinced it was the West Texas version of Bigfoot. I would answer a few suspicious persons calls around the area over the next few years, I always kept an eye out but never had another encounter like I did that night though.” HP

The Buckwheat Beast: A Curious Legend of a Chinese “Monster”