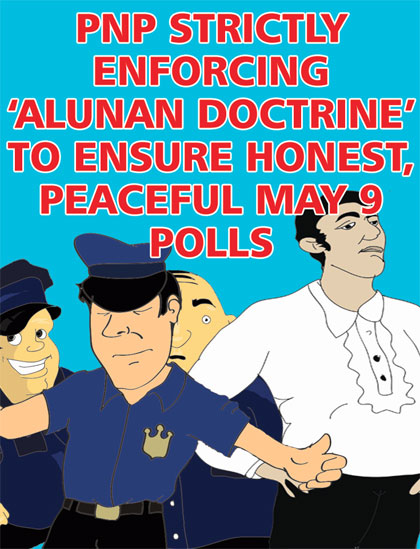 ACTING on President Duterte’s instructions, the Philippine National Police (PNP) is seeing to it that the so-called ‘Alunan Doctrine’ will be fully implemented to ensure honest, orderly and peaceful May 9 elections.

The Alunan doctrine limits the number of a politician’s armed guards. It considers two or more armed men as a private army that should be disarmed by the government.

Gen. Carlos said that he has directed all 17 Police Regional Office directors to fully implement the doctrine introduced by Secretary Rafael M. Alunan III when he was appointed by then President Fidel V. Ramos to head the Department of Interior and Local Government.

During Alunan’s time, the PNP mounted an intensified Oplan: Paglalansag which focused on neutralizing private armed groups and accounting for thousands of loose firearms in the country including those being used by political warlords and their men.

Gen. Carlos also called on candidates campaigning in identified ‘high-risk areas’ or those with known considerable presence of armed threat groups and other lawless elements and history of political violence to fully coordinate their movement with the police.

The top cop said police can always provide area security to the candidates and their supporters. What the Omnibus Election Code prohibits, he explained is the employment of armed bodyguards without the certificate of authority and gun ban exemption from the Commission on Elections.

He made the assurance in the aftermath of an incident on Tuesday last week in Quezon, Bukidnon where a shooting incident marred a meeting between presidential candidate Leodegario ‘Ka Leody’ de Guzman and a group of local tribesmen complaining of alleged land-grabbing activities in their area.

President Duterte maintained that he has decided to communicate to his Cabinet, the candidates and the public that the ‘Alunan Doctrine’ must be followed to the hilt and warned that violators of the rule will be arrested and disarmed.

He also told candidates to just seek assistance from the police or the military if they feel there is danger.

The ‘Alunan Doctrine’ explicitly states that more than two armed men moving or assembling in a group constitute a private army that must be broken up and disarmed.

President Duterte said the rule will apply to all politicians from Jolo to Abra given the ongoing threat of terrorists. He previously had said that candidates are better off with 1 security and the rest will be taken care of by the government.

The President, according to Gen. Carlos has commended the Cordillera Police Regional Office for peacefully resolving a standoff in Pilar, Abra triggered by the shooting of a police car in a local checkpoint last March 29. An ex-Marine trooper was killed when officers returned fire.

The rest of the gunmen who were on board a heavily-tinted van fled the scene and holed up at the compound of Pilar Vice Mayor Jaja Josefina Disono for hours before 12 of them surrendered peacefully and turned over 14 high-powered firearms belonging to the politician and her husband.

Following the incident, the PNP leadership said it will revoke the License To Own and Possess Firearms and Certificate of Registration issued to the Disono couple for wanton violation of the Omnibus Election Code and Republic Act 10591 or the Comprehensive Firearms and Ammunition Regulations Act of 2013.

However, the Journal Group learned that there is still no recommendation from the PNP and the AFP to place Abra under Comelec control as the 2 law enforcement agencies assured they can keep peace and order in the province known for its history of election-related violence with the full cooperation of the candidates and their supporters.

In a report to the PNP chief, Brig. Gen. Lee said they are continuing their operations to seize loose firearms and neutralize private armed groups in the province to thwart fears they could be used to sow violence during the May 9 national and local elections in Abra.

It referred to the creation of the Abra Shield where political aspirants are encouraged to surrender their firearms for a much safer elections. Lt. Gen. Azurin is supervising the Cordillera police force’s effort to keep the polls in the province as peaceful, honest and orderly as possible thru an intensified case-tracking and focused anti-criminality campaign specifically aimed at arresting threats posed by local terrorists and other threat groups.

The official also stressed the guidance of Gen. Carlos that the PNP will remain ‘apolitical guardians of peace and security in the whole country and that the PNP should not be used, misused and abused in political exercises.’

AFP Northern Luzon Command chief, Lt. Gen. Ernesto C. Torres during the same event assured that all concerns raised by the Namfrel, the Comelec and the PNP will be fully addressed as the Army is committed to work with their partner-agencies to ensure the peaceful conduct of the May 9 polls.

Comelec Commissioner Erwin M. Garcia called on all candidates in the province to strictly comply with the Omnibus Election Code so that the province will not be put under control of the poll body since it will surely affect the local populace’s feeling of safety and security.

For his part, Comelec chairman Saidamen B. Pangarungan made it clear that the AFP, the PNP and the Comelec Cordillera regional office are not recommending Abra to be placed under their control during the rest of the election period.

Pangarungan also said that the recent violence in Pilar municipality won’t be used as an excuse by any group to threaten peace and order in the province.

The officials were joined by representatives from the Namfrel, PPCRV, religious leaders, the Abra Peace Convenor’s Group, Camp Crame led by PNP Director for Operations, Major Gen. Val de Leon, different sectoral representatives and candidates in signing a peace covenant during the event which was initiated by the Abra police force headed by Colonel Maly C. Cula.

A similar program was also held in Apayao province on Thursday and led by Brig. Gen. Lee. Apayao is known for having a generally peaceful situation in every election although during the 2019 mid-term polls, a case of illegal discharge of firearm was recorded in Conner municipality although it was amicably settled.

That incident has prompted the local police to tighten its watch in the province amid the possibility that some armed groups may be hired by erring candidates to go after their rivals.

So far, the municipalities of Conner and Kabugao are being watched by security troops due to expected intense political rivalries in the two areas. 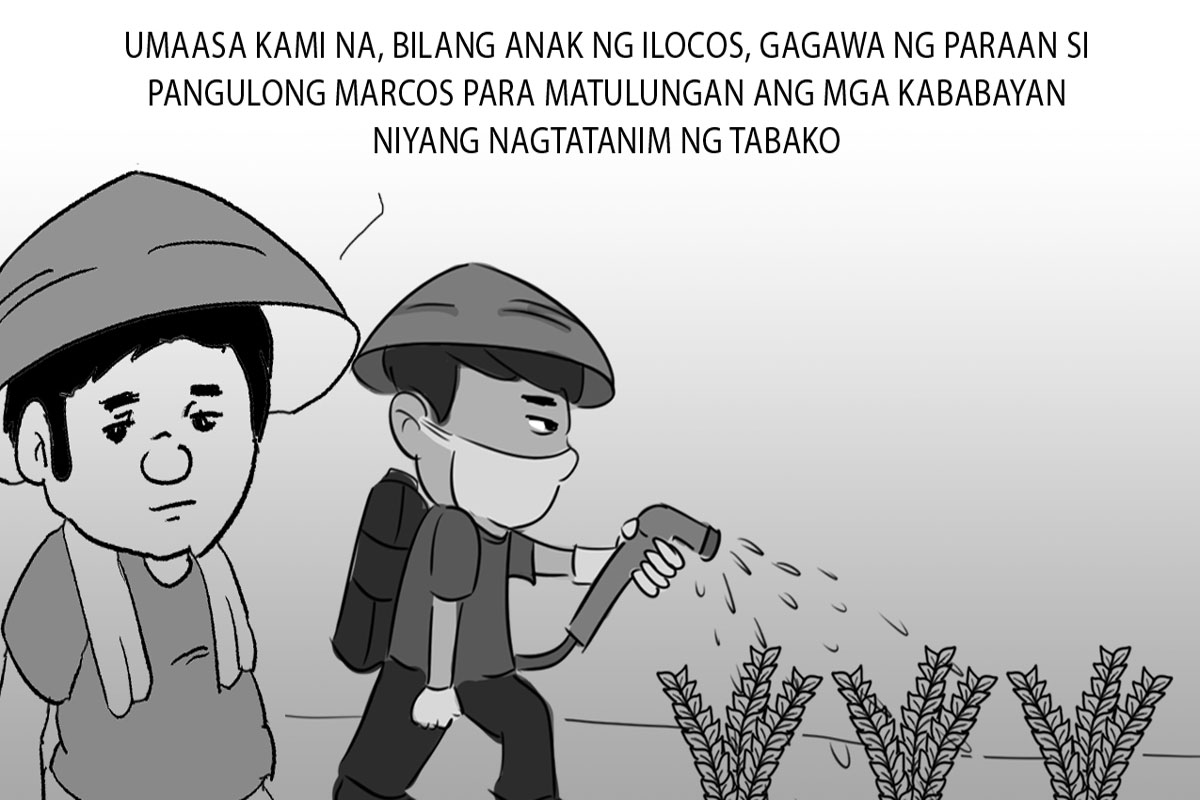