Tax on luxury goods
SHOW ALL 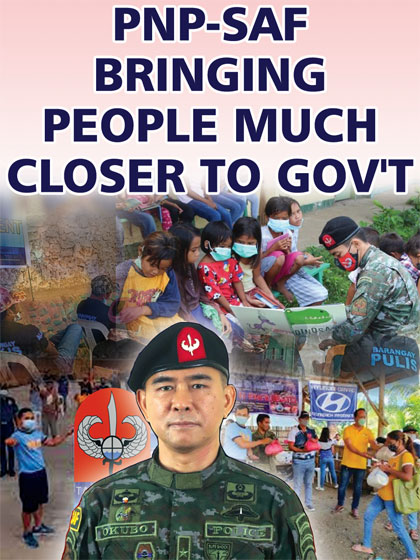 ON orders of Philippine National Police (PNP) chief, General Rodolfo S. Azurin Jr., the PNP Special Action Force (PNP-SAF) has started to become a major tool of the force in bringing the people much closer to the present Marcos administration, particularly the ‘poorest of the poor’ who have long been wanting real government service.

Target of the PNP-SAF mission are people living in so-called Geographically Isolated and Disadvantageous Areas of GIDAS. These are the tens of thousands of Filipinos, or communities with marginalized population, physically and socio-economically separated from the mainstream society due to physical factors such as distance, transportation difficulties or are recovering from crisis or armed conflict.

People living in GIDAS, specifically members of indigenous tribes are known to be being taken advantage of by the New People’s Army (NPA) which usually tells them they have been forgotten by the government.

To address the problem, the PNP-SAF headed by Brigadier Gen. Edgar Alan O. Okubo, has been partnering with different Police Regional Offices in the country to bring their Revitalized-Pulis sa Barangay program in poor communities.

The results have been very encouraging since last August. The Journal Group learned that in partnership with local government units, other concerned government agencies, local police territorial units and the military, the PNP-SAF has come up with projects that truly benefits the poor.

In Barangay Udoc in Libmanan, Camarines Norte, they helped prepare for a mushroom propagation project of the Department of Agriculture to give local residents an alternate source of livelihood; in Sitio Facoma in Bgy. Guintubhan in Isabela, Negros Occidental, they joined discussion on dengue and food and waterborne diseases; in Daet, Camarines Norte, they joined a training on how to produce organic fertilizers; in Bgy. Mahanud in Matuguinao, Samar, they joined a massive clean-up drive to raise the importance of protecting the environment; in Bgy Capacujan in Palapag, Northern Samar, they are undertaking a mission to bring potable water to students and teachers and build a drainage canal to avoid flooding during the rainy season;

In Sitio Iba and Sitio Sentro in Bgy. Waygan in Mansalay, Oriental Mindoro, they have identified the problem on lack of access to clean water, street lights and the need to repair or replace public communal toilets and a local foot bridge.

Access to clean water in the said area has caused a number of amoebiasis cases, of which one child died last September after drinking unsafe water.

These are among the projects and other concerns being addressed by the PNP-SAF in order to ensure government presence in GIDAS, especially in areas with known heavy NPA influence.

Okubo and PRO5 director, Brig. Gen. Rudolph B. Dimas agreed to come up with the program to train their men who will provide good governance to local residents living in GIDAS initially in Camarines Norte.

The PNP-SAF director earlier said he wants to bring the R-PSB program in some conflict areas in the country in support of Azurin’s effort to ensure there will be government presence that will help address the needs of the populace and most of all, counter violent extremism and communist ideas.

Okubo said members of the 91st SAC will be redeployed in Barangay Dumagmang, Labo along with those from the Camarines Norte PMFC.

He and Dimas recommended the move in order to bring the PNP’s mobile forces in the ‘center of gravity’ of NPA which is known for having a high influence in the area.

On March 19, 2021, heavily-armed NPA rebels attacked a group of policemen sent to guard a government road construction project in Bgy. Dumagmang killing five PNP personnel and injuring two others. The attack was staged by the NPA guerrillas after they got wind of the presence of the policemen who were also investigating a report of NPA extortion activities in the area.

Okubo and Dimas said their men will have the ‘mission to recover the area and clear the barangay from NPA influence’ thru the R-PSB concept in collaboration with the LGUs and different national agencies.

Okubo said he has agreed to meet the local government officials and different stakeholders every month to discuss the progress and issues that will be developed or encountered by the troops later as part of their ‘whole-of-nation approach’ to address the situation.

Okubo earlier committed to fully support the planned nationwide implementation of the successful R-PSB concept in Southern Mindanao which has been credited to be a major factor in the collapse and defeat of the New People’s Army insurgency in the region.