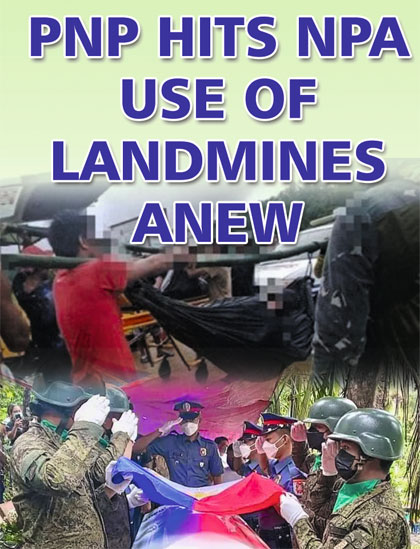 THE Philippine National Police (PNP) has condemned anew the New People’s Army (NPA) for its continued use of landmines and improvised explosive devices in attacking security troops in the countryside following the death of two policemen due to serious shrapnel wounds they suffered as a result of an NPA attack in Las Navas, Northern Samar last April 4.

The PNP leadership headed by General Dionardo B. Carlos and the Philippine Permanent Mission to the United Nations has repeatedly condemned the NPA’s continued use of landmines and IEDs which they said is a clear violation of the International Humanitarian Law or IHL as it kill and maim even civilians.

Initially killed during the ambush was Pat. Harvie Lovino, a 30-year old member of the Northern Samar 1st PMFC based in Catarman municipality.

A 3rd policeman identified as Pat. Leandro Luciano Bulosan,25, as well as three members of the Philippine Army identified as Corporal Arvin Papon and Privates First Class Whilydel Jic Rodona and Wilmer del Monte were also wounded in the attack but have been declared in safe condition, said Brig. Gen. Banac.

“We mourn the death of two PRO8 personnel who were merely performing their job when hit by the powerful IED planted by the rebels along the road. This attack is really highly-condemnable,” the official said.

“We salute them for putting their lives on the line so that our community will be safe. We shall honor their commitment, service, and dedication,” he told the two heroes’ grieving families.

“I am here to share your pain. I know that this is a painful time for you, but your loved ones died for a noble cause. We share your grief as we too, have lost dedicated and loyal comrades,” the former PNP spokesperson said as he handed over financial aid to the families and assured them of the benefits and other government entitlements.

Brig. Gen. Banac and Northern Samar Police Provincial Office director, Colonel Alfredo Tadefa as well as 1st NSPFMC commander, Lieutenant Col. Edwin Oloan Jr. said the death of the two will not be in vain as they urged their colleagues to ‘further strengthen their resolve in the fight against insurgency and terrorism, and let the memories of their fallen comrades inspire them to continue to do good for the country and the people.”

The Northern Samar Provincial Task Force to End Local Communist Armed Conflict also joined the PRO8 in condemning the NPA’s ‘barbaric use of IEDs which officials said does not discriminate between civilians and security forces.

“Patrolman Lovino, from San Isidro, and Patrolman Borja, a Catarmanon, did not deserve to die while in the performance of their duty, as no Filipino should ever be subjected to this gruesome death especially when one is serving his people and country,” the task force stressed.

The PRO8 investigation showed that the rebels first detonated an IED which struck the troops’ vehicle in Barangay San Miguel, Las Navas before firing at the lawmen with their automatic rifles.

In June last year, the Commission on Human Rights (CHR) also backed the government’s call for the NPA to surrender those behind an IED explosion in Masbate City that killed FEO and national football team player Kieth Absalon and his cousin.

The IHL is a set of rules to limit the effects of armed conflict and protect civilians who are not participating in the hostilities. It also restricts the means and methods of warfare.

Security officials have claimed that in several incidents, NPA rebels in Bicol and some parts of Caraga region have used IEDs in attacking targets, civilians included.

Police and Army officials in Las Nieves, Agusan del Norte in 2020 said that the discovery of bomb-making materials in an abandoned NPA lair in the province is proof that the NPA is still using IEDs in full violation of IH and the Comprehensive Agreement on Respect for Huamn Rights and International Humanitarian Law and the Ottawa Treaty under the Geneva Convention.

The official said the victims have just finished their activities in relation to a PRO8-led Revitalized Community Support Program in Bgy. Osang, Catubig and were on their way to their headquarters to receive their COVID-19 booster shots when they were ambushed by the guerrillas in Bgy. San Miguel,Las Navas.

Gen. Carlos hit the latest NPA attack in the countryside which came in the wake of their stepped up effort to go after all private armed groups and loose firearms that could be used to disrupt the holding of the May 9 national and local elections.

The ambush was reportedly staged by the guerrillas to thwart efforts by the police and the military to provide government service to residents of so-called ‘Geographically Isolated and Disadvantageous Areas’ in Eastern Visayas which are known to be being taken advantage of by the NPA movement to recruit members and other supporters.

A PRO8 investigation showed the rebels first detonated an improvised explosive device which struck the troops’ vehicle before firing at the lawmen with their automatic rifles.

Brig. Gen. Banac said the troopers managed to return fire and inflict some casualties on the side of their attackers.

“We will be filing appropriate criminal charges against the suspects as soon as we have identified them,” the Eastern Visayas police director said.