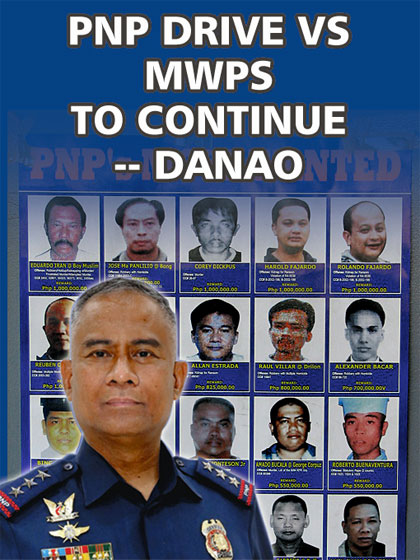 PHILIPPINE National Police (PNP) Officer-in-Charge, Lieutenant General Vicente D. Danao Jr. on Thursday assured the public of their continuing all-out effort to account for most wanted persons and other lawbreakers ordered jailed by courts nationwide as part of their efforts to keep the streets safe 24/7.

The top cop said they are making a major headway in preventing and suppressing crime and terror in the country byintensifying their drive to arrest most wanted criminals and terrorists since the year started.

A First Quarter 2022 assessment report released by the PNP Directorate for Operations headed by Major Gen. Val T. de Leon heralded PNP operational accomplishments in the national flagship campaign against illegal drugs, highlighted by the confiscation of some P1.63-billion worth of illegal substances from 12,858 police operations from January 1 to March 31, 2002.

As a result of these efforts, 15,946 suspects were arrested while 31 died in police operations.

During the same period, 288 members of organized crime groups were rounded-up by the police all over the country.

The PNP-DO report also said a total of 1,476 firearms were also confiscated from crime groups, private armed groups, and communist/local terrorist groups during the period.

The continuing crackdown against loose firearms in the country also resulted in the arrest of 2,542 persons who are all facing charges for violation of Republic Act 10591 or the Comprehensive Firearms and Ammunition Regulations Act of 2013.

National Capital Region Police Office (NCPRO) director, Major General Felipe R. Natividad yesterday announced the arrest of 3,854 wanted persons in Metro Manila from March 1 until last May 29 amid their all-out effort to account for criminals and other wanted law offenders in the metropolis.

The arrests of the Regional, District, Station Level and Other Wanted Persons in Metro Manila were made amid the enhanced intelligence-gathering and coordination between the NCRPO and its other counterpart law enforcement agencies, said the official.

Crime volume in the country overall has also dropped by more than 70 percent since the start of the Duterte administration but Lt. Gen. Danao said they are not letting their guard down and are seeing to it that their anti-criminality drive will remain in full throttle under the incoming administration of President-elect Ferdinand ‘Bongbong’ Marcos Jr.

Lt. Gen. Danao said that during the May 9 national and elections which went on record as the most peaceful in the country, even the number of focused crimes or the eight major crimes greatly went down compared to the May 9, 2016 records.

A total of 58 crimes including nine cases of murder; two homicide; 25 physical injuries, four rape cases; five robbery incidents; 12 theft cases; and one motorcycle theft were recorded by the police force last May 9 when voters trooped to different polling centers across the country to give a landslide victory to former Senator Marcos and his running-mate, Davao City Mayor and presidential daughter Sara Duterte.

Ahead of the just-concluded polls, the PNP rode the crest of the major gains it scored against criminality in 2021. Records show that the PNP recorded a significant 14 percent drop in all major crimes in the country in 2021 consistent with the downtrend in the total crime volume nationwide since the start of the Duterte administration and its war on drugs.

The PNP Directorate for Investigation and Detective Management headed by Major Gen. Jireh Omega D. Fidel reported that from 43,696 incidents in 2020, crime incidents dipped to only 37,626 or 6,070 fewer incidents in 2021, or a 13.89 percent reduction.