PNP asks pols, other Pinoys to comply with gun rules or lose privilege 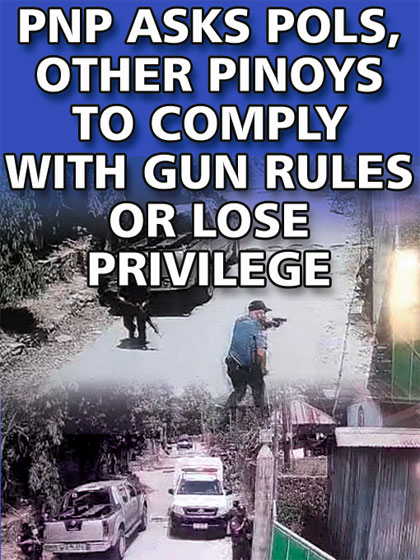 THE Philippine National Police (PNP) leadership yesterday called anew on politicians and other licensed gun-holders in the country to strictly comply with all guidelines regarding firearm licenses and Permit-to-Carry-Firearms-Outside-of-Residence issued to them or be stripped of their privilege to own and possess guns in the country.

The PNP headed by General Dionardo B. Carlos issued the reminder in the wake of the incident in Pilar, Abra last week where the mayor and vice-mayor were accused of employing a group of former Marine and Army soldiers as unauthorized bodyguards.

Fourteen assorted firearms registered under the name of the vice-mayor and her husband were also turned over to the Cordillera police.

The March 29 incident which left one ex-Marine trooper dead and two local policemen injured has prompted the Cordillera Police Regional Office headed by Brigadier Gen. Ronald O. Lee to recommend a string of criminal charges against the re-electionist mayor and vice-mayor.

Opponents of the two are also mulling a disqualification case against them.

The Journal Group learned that the 12 men including eight ex-Marine troopers and a former Army soldier have given written testimonies that they were using the licensed firearms of the two politicians to guard them.

PNP rules and regulations regarding PTCFORs and gun licenses stipulate that the firearms shall be concealed and are non-transferable and violation of these two provisions shall cause the immediate revocation of the License to Own and Possess Firearms and Firearm Registration of the gun-holder.

PTCFOR rules also state the firearm shall not be brought inside places of worship, public drinking and amusement places and all other commercial or public establishment.

The PNP chief or his authorized representative may revoke, cancel or suspend a gun license or permit on the following grounds:

b) Conviction of a crime involving moral turpitude or any offense where the penalty carries an imprisonment of more than six (6) years;

c) Loss of the firearm, ammunition or any parts thereof through negligence;

d) Carrying of the firearm, ammunition or major parts thereof outside the residence or workplace without the proper permit to carry the same;

e) Carrying of the firearm, ammunition or major parts thereof in prohibited places;

f) Dismissal for cause from the service in case of government official and employees;

g) Commission of any acts penalized under Republic Act No. 9165, otherwise known as the “Comprehensive Dangerous Drugs Act of 2002”;

h) Submission of falsified documents or misrepresentation in the application to obtain license or permit;

i) Noncompliance of reportorial requirements; and

j) By virtue of court order.

Brig. Gen. Lee has recommended to Department of Interior and Local Government Secretary Eduardo M. Año and Gen. Carlos a series of actions in connection with the incident in Pilar municipality wherein bodyguards of Vice-Mayor Josefina Jaja Disono ignored a police checkpoint and fired shots at officers.

An ensuing gunfight led to the killing of one of the suspects who turned out to be a dismissed member of the Philippine Marines and a standoff after the armed men holed up inside the Disono compound before eventually surrendering on Wednesday last week along with 14 of their weapons.

The official said that as of press time, they are continuing their efforts to recover more firearms and other deadly weapons in possession of the Disonos and other politicians in Abra that could be used as an ‘instrument of violence’ during the May 9 national and local elections.

Gen. Carlos has commended the Cordillera region and Abra police officers and men who helped resolve the standoff and caused the surrender of the 12 suspects holed out inside the politician’s compound without shots being fired.

Brig. Gen. Lee said they have recommended the filing of appropriate criminal cases including assault on a person in authority, violation of the gun ban and attempted murder against the occupants of the van that disregarded their checkpoint.

“We are also recommending a disqualification case against Vice-Mayor Disono and her brother Mayor Mark Roland Somera who are both seeking re-election after we discovered they were employing unauthorized bodyguards,” the official said.

In a report to Gen. Carlos, the Cordillera police director said that since last December, they have been validating a series of reports and information from concerned citizens that the Pilar mayor and vice-mayor are allegedly maintaining a private armed group composed of retired or dismissed Armed Forces personnel, many of them recruited from Mindanao.

He said they validated the information with the help of the AFP intelligence community and eventually found out that the complaints are accurate and true.

Around 8 a.m. last Tuesday, members of the Pilar Municipal Police Station and the Cordillera Regional Mobile Force Battalion were dispatched to conduct a spot PNP-Comelec checkpoint along Beroña Street in Poblacion, Pilar.

The officers later flagged down a white Toyota Hi-Ace van with an unknown plate number around 10:30 a.m. But instead of stopping, the driver of the van stepped on the gas and bumped two officers, Lieutenant Boyd Leeson Kis-Ing and Patrolman Frenzel Alperez who both suffered abrasions and other body injuries.

The lawmen chased after the suspects but were fired upon. A bullet fired by one of the van occupants shattered the windshield of a police mobile car which carried four officers.

The lawmen returned fire prompting the armed men to enter the compound of Vice-Mayor Disono where they sought refuge.

The body of Bermudo was subjected to an autopsy and paraffin test while the vehicle was brought to the Abra PPO headquarters for a bullet trajectory examination, said Abra police director, Colonel Maly C. Cula.

As the Cordillera police surrounded the vice-mayor’s compound, Brig. Gen. Lee supervised all efforts to force the suspects to surrender and turn over their weapons.

Around 5 p.m. Wednesday, 12 of the suspects— eight of them former Marine troopers and another an ex-Army soldier—finally surrendered accompanied by their Manila-based lawyer Raymund Fortun who immediately motored to Abra last Tuesday.