Journal News / Editorial / Opinion / PNP, AFP on the run after terror group remnants that laid siege to Marawi 4 years after

PNP, AFP on the run after terror group remnants that laid siege to Marawi 4 years after 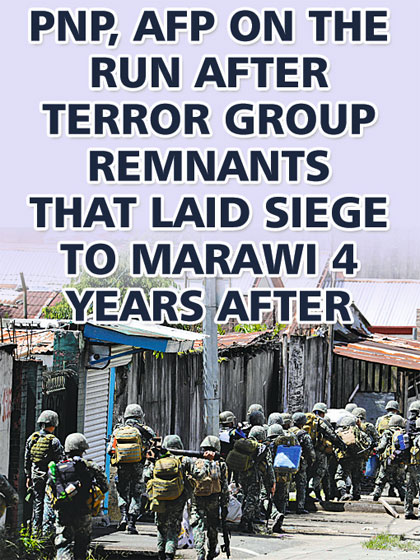 FOUR years after ISIS-inspired terrorists who laid siege to Marawi City were defeated by security forces, government intelligence agents continue their efforts to track down remnants of the group whose main objective is to establish an Islamic State in the country.

The Philippine National Police (PNP) headed by General Guillermo Lorenzo T. Eleazar and the Armed Forces of the Philippines (AFP) now under Gen.. Jose Faustino Jr. are closely partnering with each other to account for the Maute-ISIS Group which was reported to still have more than 300 fighters remaining after they were defeated in Marawi City.

Security officials said the terrorists are believed to be lying low but are continuing to retrain and recruit new members. The United States has designated the ISIS Philippines as a ‘foreign terrorist group’ operating in parts of Lanao del Sur, Basilan, Sulu and even in Sultan Kudarat province.

During the five-month long Marawi Siege which started on May 23, 2017 and went on to become the longest urban battle in the country’s modern history, a total of 987 militants including 13 foreigners were killed while 12, one of them a foreigner, were captured.

The siege also resulted in the death of 168 government troops and 87 civilians while more than 1,400 soldiers and policemen were wounded. President Duterte declared the liberation of Marawi on October 17, 2017 following the death of the siege leaders Omar Maute and Isnilon Hapilon, the leader of the ISIL-affiliated Abu Sayyaf Group.

“It is operationally down but not totally defeated, It is attempting to rise again. It is severely broken but not really dissolved. It is resolved to wreak havoc even during the COVID-19 pandemic and beyond,” he said.

The university professor had the following words to describe the ISIS Philippines: “Wounded but not dead. It is struggling to survive. Weak but can still mount very strong violent attacks. Smaller in size but it can still create big trouble. It’s current size and logistics are deficient. But threats they pose are arguably evolving and persistent.”

A member of the Advisory Group of the PNP Drug Enforcement Group (PNP-DEG), Banlaoi said it is good that the Senate passed the Anti-Terrorism Law of 2020 and the government started to implement in 2019 the National Action Plan to Counter and Prevent Violent Extremism.

However, he said the challenges posed by the Marawi Rehabilitation Plan may be taken advantage of by the terrorists.

“The longer you delay the rehabilitation of Marawi, the more you expose people to radicalization especially the families severely affected by the siege,” Banlaoi emphasized.

This is the reason why the government needs the full support of the community and the private sector in addressing the problem.

“There is still a great need however to strengthen community-based approach and private sector participation to counter comprehensively current, persistent and emerging terrorist threats in the Philippines,” he said.

The AFP already has its BRAVE program which is short for Broad Reforms in Addressing Violent Extremism.

The objective of the program is to eliminate drivers of violent extremism; have a comprehensive mainstreaming of Former Rebels or FRs; and sustain peace and development in the country or the province as a whole.

To achieve the vision, the AFP is embarking on a mission to establish conflict resilient communities; promote a healing process for victims of Local Terrorist Groups or LTGs; promote community acceptance to FRs; provide a comprehensive interventions for the FRs as well as their victims; promote convergence of efforts thru the concept of shared responsibility; promote adherence to the rule of law; and bring back the confidence of the people to the government thru good governance.

The PNP is also doing its own major share in addressing terror threats thru the application of the rule of law and seeing to it that due process will be observed each time police conduct an operation while engaging all sectors of the community including the youth, women, poor and the marginalized and the religious sectors.

The PNP and the AFP have also partnered with other government intelligence agencies to successfully block the websites of groups like the Islamic Emirate of the Philippines which previously have been calling for public donation.

“I would like to emphasize that there’s a website called Islamic Emirate of the Philippines which was previously monitored by the intelligence community. Although the website has already been frozen, it’s a warning sign that the Taliban takeover of Afghanistan can still resonate in Southern Philippines,” Banlaoi said.

Banlaoi called on the government to fully monitor how the ISIS-Philippines and the Abu Sayyaf Group and the Turaife Group which have pledged allegiance to ISIS in particular will evolve in the context of the Taliban takeover in Afghanistan.

“Drug trafficking, piracy, human trafficking are actually being fueled by acts of terrorism. The reason is they make money because of these violent activities,” he said.

Gen. Eleazar last week maintained they have not received any report about possible terror attacks in the country amid a warning from the Japan Ministry of Foreign Affairs about potential attacks in Southeast Asia.

However, the top cop said they are not lowering their guard and are continuously monitoring intelligence reports from the ground and from counterparts both from local intelligence units and from other foreign countries involved in the war against terror.

“We have not received any report on possible terror attacks as advised by the Japan Foreign Ministry but this does not mean that we would lower our guard on this matter,” Gen. Eleazar said.

The PNP chief also stressed that since the Taliban takeover in Afghanistan, police units particularly those in the Mindanao region have been alerted so they could prevent the possibility of spillover of hostilities from the country which may be perpetrated by local terrorists.

He issued the remarks after the Japan Ministry of Foreign Affairs warned about the risks of attacks, such as suicide bombings, in countries such as The Philippines, Indonesia, Singapore, Malaysia, Thailand, and Myanmar and called on its citizens to exercise extra precautions while staying in these countries.

Gen. Eleazar assured the public that the PNP is continuing its intensified intelligence-gathering measures to prevent any atrocities being plotted by lawless and terror groups, whether local or international.

The PNP Intelligence Group (PNP-IG) headed by Colonel Neil B. Alinsañgan and other regional intelligence divisions from the 17 Police Regional Offices are involved in the stepped up monitoring of potential threats in the country.