Switzerland’s melting glaciers revealed the remains of a 1968 plane.

Glacial melt in the Swiss Alps has unearthed human remains and the wreckage of a historic plane crash.

Rising temperatures due to climate change are causing glaciers to thaw and recede.

As glaciers melt, artifacts and remains buried beneath patches of ice are surfacing. 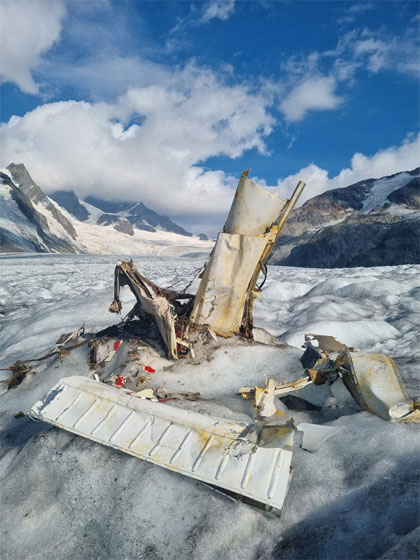 Thawing glaciers in the Swiss Alps revealed two sets of human remains this summer, as well as the wreckage of a 1968 plane crash that had been frozen beneath snow and ice. They’re some of the latest objects unearthed in a warming world.

French climbers found skeletal remains on August 3, on the Chessjen glacier in the southern canton of Valais, in Switzerland. Dario Andenmatten, warden of a mountain hut many hikers start their ascents from, told The Guardian that he thought the person died “sometime in the 1970s or ’80s.”

The image, taken on August 6, 2022, shows meltwater stream from the Tsanfleuron Glacier in the Swiss Alps 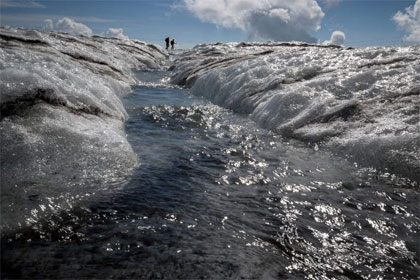 Meltwater stream from the Tsanfleuron Glacier in the Swiss Alps, on August 6, 2022. FABRICE COFFRINI/AFP via Getty Images

In late July, another body was found on the Stockji glacier, near a ski resort. Luc Lechanoine, one of the two hikers who discovered the body, told Swiss newspaper Blick the remains were mummified and slightly damaged and the person was wearing ’80s-style clothing.

Police are still working to identify both sets of remains, according to The Guardian. 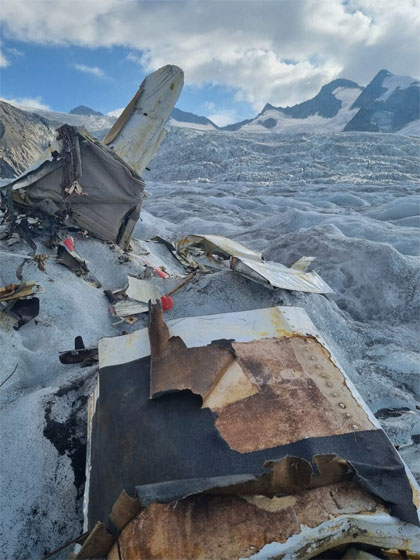 Scattered plane pieces from a crash were discovered last week.

“At the time of the accident, more than 50 years ago, the technical means to recover aircraft wreckage in difficult terrain were limited. Due to the melting of the glaciers, particularly in summer, it is therefore possible that other pieces or pieces of wreckage may be released from the ice,” police said in the statement, according to a Google translation.

Amid warmer temperatures, things frozen beneath snow and ice are coming to the surface. 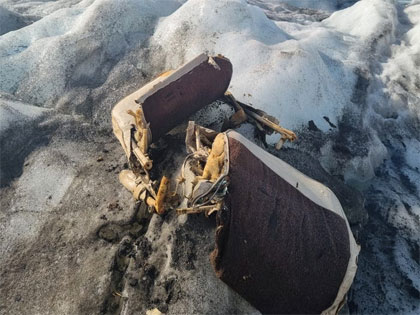 What looks to be a plane seat found, amongst other debris, on the Aletsch glacier. Rebecca Gresch/Stefan Gafner/Hüttenwarte Konkordiahütte

A growing body of research suggests that as the world warms due to climate change, many of the Alps’ glaciers — like other glaciers around the world — are thawing and receding.

This is not the first time retreating glaciers have unearthed artifacts and remains. In the last decade, the Hawaii-based Joint POW/MIA Accounting Command has worked to recover the remains of 52 service members who died when their military transport plane crashed into an Alaska mountain in 1952.

This photograph taken near Gletsch, in the Swiss Alps, on July 8, 2022 shows insulating foam covering a part of the Rhone Glacier to prevent it from melting next to its glacial lake. 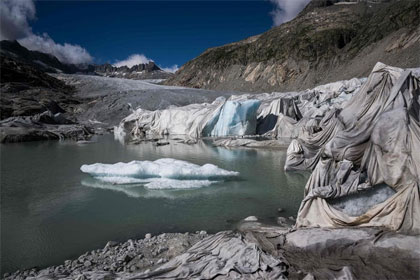 Insulating foam covers part of the Rhone Glacier to prevent it from melting next to its glacial lake, in the Swiss Alps, on July 8, 2022. FABRICE COFFRINI/AFP via Getty Images

“As the glacier melts and the glacier moves, more material comes up to the surface,” Gregory Berg, the forensic anthropologist who led the team that examined the remains that emerged from the retreating glaciers, told reporters at a news briefing in 2013.

More recently, in western Mongolia and Norway, melting ice has exposed fragile, previously frozen artifacts, including ancient tools, rope, spears, and arrows, according to William Taylor, an archaeologist at University of Colorado Boulder. In The Conversation, Taylor writes that the melting ice give scientists a narrow window of time to secure these objects before they’re damaged or degraded by weather and exposure to the elements.