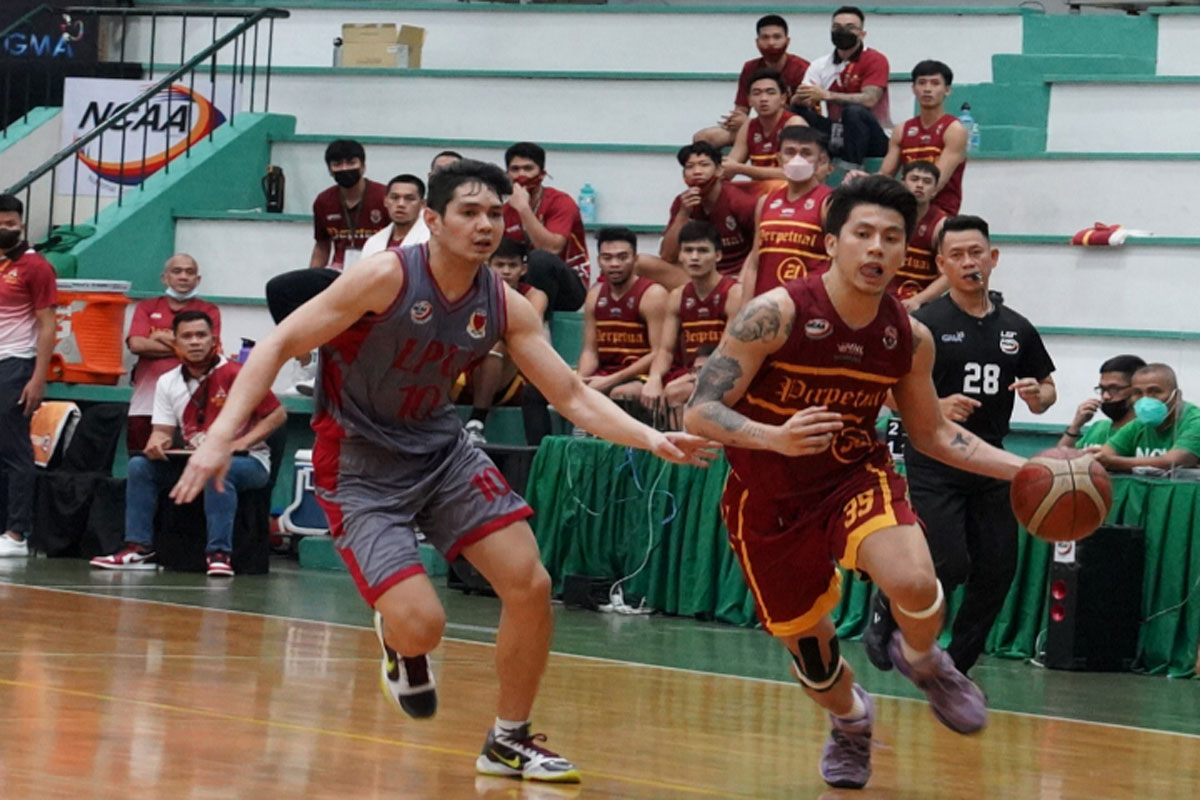 Perpetual Altas veteran forward Kim Aurin made a game-high 22 points to lead his team to victory over Lyceum of the Philippine in the NCAA Season 97 men’s basketball tournament. Photo by Dennis Abrina
Basketball,

UNIVERSITY of Perpetual Help System Dalta and Arellano University kept their hopes alive of making it to the play-in stage after besting separate foes in the NCAA men’s basketball tournament yesterday at the La Salle Greenhills gym.

The Altas pulled off a close 72-69 win over a error-prone Lyceum of the Philippines University side, while the Chiefs caught Emilio Aguinaldo College in its worst form in a 70-55 victory.

The results created a four-way logjam in fifth spot between Perpetual, Arellano, EAC and idle San Sebastian at 3-5, leaving the chase for the two remaining play-in spots too close to call.

The play-in round, which involves teams ranked third to sixth teams after the single-round eliminations, will determine the two other Final Four qualifiers.

Veterans Kim Aurin and Jielo Razon produced key lay-ups down the stretch and the Altas capitalized in their foes’ late-game miscues to chalk up the important victory.

The 6-foot-2 Aurin, who finished with 22 points and five rebounds, is determined to extend his collegiate career and help Perpetual make a return trip to the Final Four after missing the bus in 2019.

Staving off early vacation, the Altas hope to hurdle their final elimination match against the Generals on Friday, giving coach Myk Saguiguit more time to plot in a game which he considered as do-or-die.

Razon added 14 points and five boards while Cris Pagaran had 12 points and seven rebounds for the Altas.

Justin Arana, one of the contenders for the season MVP award, recorded his sixth double-double of the tournament with 21 points and 18 rebounds to go with three blocks and three assists for the Chiefs.

Coach Cholo Martin, who was mostly intense in the match, emphasized the need for his Chiefs to not to put into waste their conquest of the Generals when they meet the Bombers.

The Generals, who trailed by as much as 21 points, could not get the job done in bolstering their bid of making it to the next phase of the league.

The Pirates, who committed 30 turnovers, will miss the Final Four for the first time since 2016.

Omar Larupay came through with 17 points, 11 rebounds and three blocks to lead LPU.

Ralph Robin and Marwin Taywan had 13 and 12 points, respectively, for EAC.