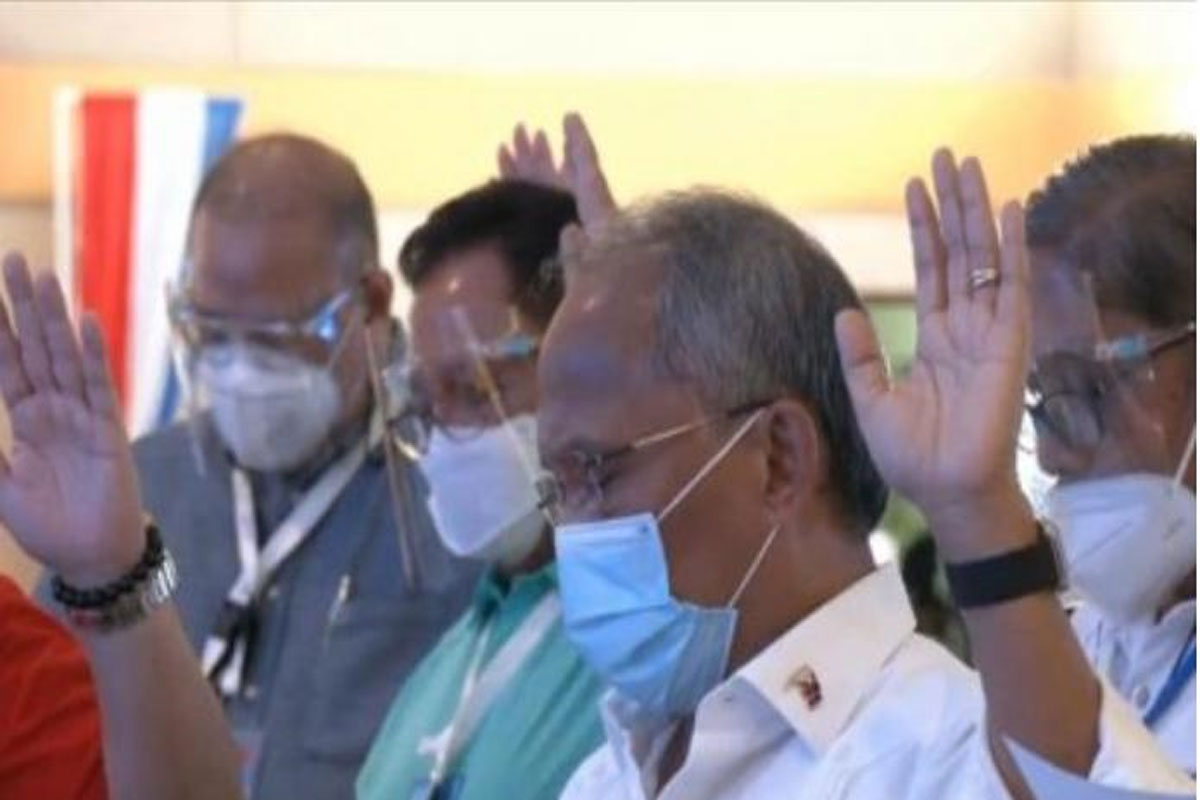 Pacquiao is currently in Los Angeles, California where he is training for his August 22 (August 21, US time) fight against Errol Spence Jr. in Las Vegas.

Cusi’s designation came even after Pacquiao and the PDP-Laban National Executive Committee recently expelled him as vice chairperson for allegedly “manipulating” members to support the possible tandem of Davao City Mayor Sara Duterte and her father in the 2022 elections as presidential and vice presidential candidates, respectively.

President Rodrigo Duterte also thanked the members of the ruling party for their “continued trust and confidence” in him despite the rift among his party mates.

“I am grateful for PDP Laban’s continued trust and confidence in my leadership,” Duterte said.

On Tuesday, Senator Aquilino “Koko” Pimentel III told members of the PDP-Laban to ignore the national assembly organized by Cusi.

Duterte defended the election of Cusi, saying there is nothing in the party’s by-laws “which would provide for an acting president solely upon the push and shove of the president”.

He added that Pimentel “started the ruckus” by appointing Pacquiao as the “acting president” of PDP-Laban.

“You just do not push somebody there. ‘O sige, ikaw na muna mag-presidente’ (‘You can now serve as the president’). That is not how things are done,” Duterte said. “Ang nagkamali diyan si, ang nagkamali diyan si Koko, hindi si Pacquiao (It is Koko’s mistake, not Pacquiao’s). Pacquiao does not know anything.”

Duterte acknowledged that Pimentel might make a move to challenge the election of new PDP-Laban officers.

Duterte, however, reminded Pimentel that PDP-Laban, which was “asleep for 100 years”, only “woke up during the election and when I ran for the presidency under the ticket”.

Don’t be blinded by ambitions

Amid the feud within the PDP-Laban, Duterte called on his party mates to remain focused on their ultimate goal of bringing comfortable life to all Filipinos.

“Let us not be blinded by our own ambitions and let us not allow this party to advance personal interests,” Duterte said. “To my dear party mates, let us never lose sight of the founding principles from which this party was built on. And let us never forget that our end goal is always to improve welfare of the Filipino people.”

Duterte said the attendance of PDP-Laban members in the national assembly sends a “clear and resounding” message that the ruling party is “as strong as ever”.

He also thanked his party mates’ continued support for his administration’s relentless drive against illegal drugs, terrorism, corruption in government, and criminality.

“Despite all the challenges that we are facing, your unwavering support for this administration’s priorities — especially our campaign against illegal drugs, terrorism, corruption, and poverty — is truly reassuring,” he said.

Given that the PDP-Laban has “grown big” and that its members appear to be “united” until the end of his term, Duterte vowed to campaign for those who want to run in the 2022 local and national and elections. Philippine News Agency