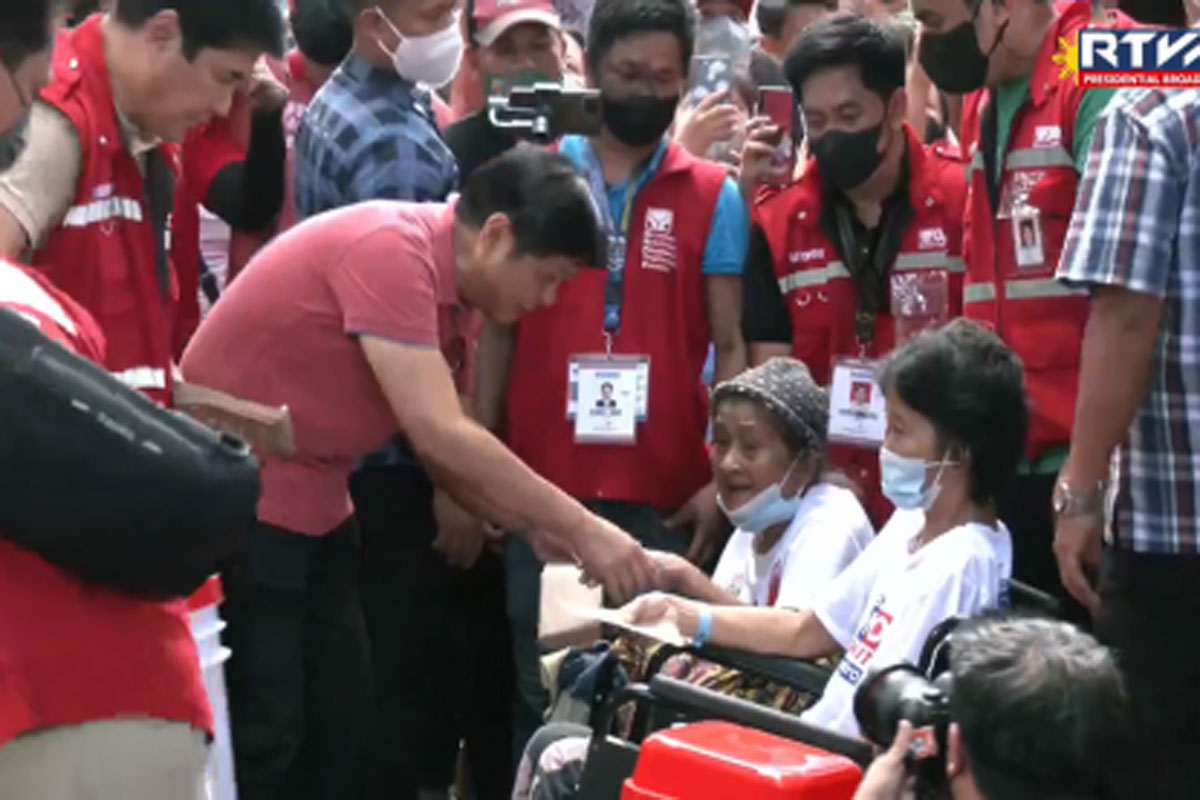 President Ferdinand R. Marcos Jr. leads the distribution of aid for victims of Severe Tropical Storm Paeng in Datu Odin Sinsuat, Maguindanao del Norte on Tuesday (Nov. 1, 2022). The President stressed the importance of improving the standard operating procedures for the distribution of assistance to victims of natural disasters. Screenshot from RTVM
Nation,

PBBM to improve distribution of aid

PRESIDENT Ferdinand R. Marcos Jr. on Tuesday stressed the importance of improving the standard operating procedures (SOPs) for the distribution of assistance to victims of natural disasters.

Marcos, in a situation briefing in Datu Odin Sinsuat, Maguindanao del Norte, said the SOPs must be “more efficient” to ensure the immediate release of aid to displaced individuals.

“We will have to improve the SOP,” he said, as he lamented that disaster victims in some localities in the country need to secure a ticket first to get a relief good.

Marcos thumbed down the condition set by some local government units (LGUs), saying it is important to fast-track the distribution of aid.

“There is no such thing as sobra na (excess) relief goods. No such thing. Kung ano ang meron tayo, ibigay natin kaagad. It doesn’t matter kung may papel, huwag niyo nang papirmahan. Basta bigay na. Walang kakainin iyang mga iyan (We have to give everything that we have. It doesn’t matter if they have the ticket. Just give the relief good because they have nothing to eat). That is something that we can improve on,” Marcos added.

After the situation briefing, Marcos led the relief efforts for victims of Severe Tropical Storm Paeng that hit the Bangsamoro Autonomous Region in Muslim Mindanao (BARMM).

He distributed the food packs and assistance to the victims who are currently taking temporary shelter in one of the evacuation centers in Datu Odin Sinsuat, Maguindanao del Norte.

In his speech, Marcos said concerned government agencies would continue providing assistance to ensure the fast recovery of disaster victims.

Marcos said the government would also grant cash aid worth between PHP5,000 and PHP10,000 to help them rebuild their homes.

Meantime, the Presidential Commission for the Urban Poor (PCUP), upon Marcos’ directive, vowed to attend to the needs of individuals who have been severely affected by the tropical cyclone.

In a statement on Tuesday, PCUP chairperson Undersecretary Elpidio Jordan Jr. said he has directed all the field operations offices of the commission to conduct quick response to affected urban poor families.

PCUP Commissioner for the National Capital Region (NCR) Rey Galupo also requested for the Philippine Amusement and Gaming Corporation (PAGCOR) donations for the disaster-stricken families to help them recover from the devastation brought about by Paeng.

Galupo sent a letter to PAGCOR, in an effort to help many of the victims “have been left starving in their make-shift homes.”

In his letter, Galupo asked for “much-needed” donations that would give immediate relief to affected urban poor families nationwide, particularly in areas hardest hit by the weather disturbance.

“On behalf of our clients (urban poor), the Commission would like to humbly request for donation in kind to be distributed to the typhoon-affected urban poor communities in the Visayas and Mindanao Regions targeting 10,000 beneficiaries. In the alternative, the Commission would also like to express its willingness to be your partner in your relief distribution activities,” the letter read.

Around 741,777 families or 2,418,249 individuals have so far been affected by Paeng, according to the situation report released by National Disaster Risk Reduction and Management Council (NDRRMC) on Tuesday morning. Philippine News Agency